A deal between train companies and rail unions is “achievable”, Mick Lynch, the head of the RMT union, has said as the biggest day of transport strikes causes travel misery for commuters.

A meeting, convened by Huw Merriman, the rail minister, was held on Thursday to try and resolve the bitter dispute over pay, jobs and conditions but failed to break the deadlock.

But Mr Lynch suggested a way forwards can be found to avert further rail strikes.

“So we need some compromise on some of the conditions they’re putting on the offer and we’ll need an improvement in the pay offer.

“That is achievable, in my view.”

Members of the RMT union have begun another 48-hour strike today, after the lack of progress after Thursday’s meeting.

The union said “further discussions” had been agreed but “in the meantime, all industrial action remains in place”. 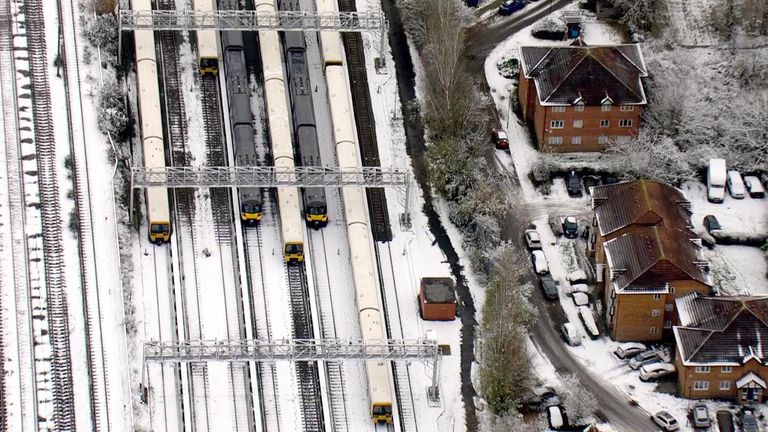 Read more:
Strikes every day before Christmas – which sectors are affected and why
Nurses call biggest strike a ‘turning point’
‘We are exhausted and deflated’ – nurses’ stories from picket lines

Members of both groups will strike today and tomorrow, and then on 3, 4, 6 and 7 January, with RMT members at Network Rail also striking from 6.30pm on Christmas Eve until 6am on 27 December.

Mr Lynch said: “I know that there are some very simple steps that the employers and ourselves could take together to get a solution to this.

“That means a common-sense approach – both sides get into a position where there’s some commonly held positions.

“And I think we could do that in the next period. And if that is done very quickly, we can consider the industrial action going forward.”

He added: “If they can come towards us a little bit, we can maybe work up some solutions.

“People have got time now to make plans, and I hope that they’re successful in that, and that we can progress these talks to maybe get some solutions in the next week or so.”

Passengers across the rail network have been warned not to travel.

Mr Lynch told Sky News that TSSA members who have accepted a pay offer from Network Rail are “not affected by the changes” proposed.

“They are supervisors and white collar workers. They don’t do the work that our members do who are profoundly affected by the changes, including the safety regime, as will be the public,” the RMT boss said.

“Whether they’re in the dispute or not, it doesn’t really affect the course of the dispute. For our members, the proposals are completely inadequate at this time.”

Rail, bus and highways workers are among hundreds of thousands of workers striking this winter as inflation and other cost-of-living pressures leave pay behind.

Also on strike today are more than 900 staff who work at the Rural Payments Agency, DVSA staff in Scotland and Northern Ireland and Eurostar security guards.

‘Coming very soon!’: Jeremy Renner shares image of new show which will be out ‘as soon as I’m back on my feet’
Notorious criminal Charles Bronson launches art exhibition in hopes of new parole bid
Shark kills 16-year-old girl after she jumped from jet ski into water
‘High-risk’ Nicola Bulley investigation will have ‘quickly escalated’, former detective says
Weekend Project: I added a solar panel to my electric mini-truck to charge from the sun