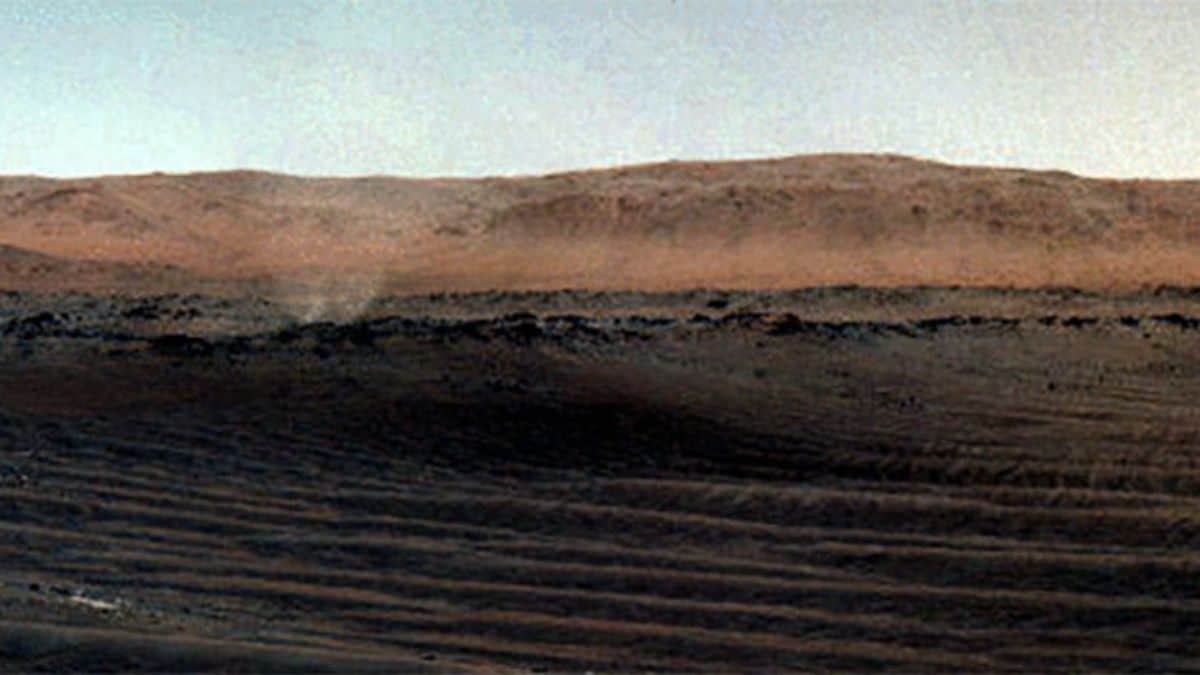 A dust devil looks a bit like a tornado, but is weaker and rarely lasts more than about a minute.

It is a twisting column of warmed air scooting across sun-heated ground, made visible by the dust that it lofts upwards. Although usually benign, occasionally dust devils can kill.

Dust devils have been known to appear on Mars since the 1970s. They have been observed both from the ground and from orbit.

The more dust in the Martian atmosphere, the warmer and more agitated it becomes, and this can escalate into a global dust storm.

When the dust settles, it can coat and disable the solar panels that are essential for many of the instruments we’ve landed on the planet.

There’s a lot we don’t know about how these devils function. But new research, published this week in Nature Communications, has recorded what dust devils sound like – giving fresh insights into how they operate.

But it also raises questions about how future astronauts would detect and interpret sounds on the red planet.

There has been a vast amount of erosion on Mars since the last rivers and lakes vanished, including at the landing sites of both Nasa’s current rovers Curiosity and Perseverance.

Although the erosive power of an individual dust devil is tiny, a billion years worth of dust devils could potentially have worn away kilometres of rock.

There are thus many reasons for wanting to better understand how dust devils function.

And we now know what a Martian dust devil sounds like thanks to the new study led by Naomi Murdoch of Toulouse University in France.

Many passing dust devils have been imaged by cameras on Mars landers and rovers, but Murdoch and her team report a dust devil that luckily passed exactly over the Perseverance rover on September 27, 2021, which was on the floor of Jezero crater.

The rover’s masthead camera, named SuperCam, includes a microphone, and this recorded the sound of the wind rising and falling as the dust devil passed over.

This took less than ten seconds, and you can hear the sound recording here(https://jirafeau.isae-supaero.fr/f.php?h=2JWSkdJR&p=1) (turn your volume to max). Other sensors gave information too. They showed that the pressure fell to a minimum between the two bursts of wind noise – which to me is consistent with sucking rather than blowing – and also recorded impacts of individual dust grains onto the rover.

The dust devil was about 25 metres in diameter, at least 118 metres tall, and was tracking across the ground at about five metres per second.

The maximum wind speed in the rotating vortex was probably just under 11 metres per second, equating to a “fresh” to “strong” breeze on Earth.

Did it really sound like that? Listening to a recording purporting to be the sound of Martian wind is all very well, but is this really what we would hear if we were there ourselves? The first thing to note is that this does genuinely originate as “real sound”, unlike other data such as images or radio signals turned into sound (a process known as sonification), such as the so-called sound of two black holes colliding or radio noise from from Venus’s atmosphere.

The dust devil audio file contains actual sound waves picked up by a microphone on Mars.

There the atmosphere is much thinner than on Earth (Martian surface pressure is less than a hundredth of ours), so the high frequency component of sound hardly carries (scientists say it’s “attenuated”).

The result is that the wind sounds much lower in pitch than a similar wind on Earth.

The only other planetary body from which we have genuine sound recordings is Venus, where in 1982 two Soviet “Venera” landers recorded wind and lander operation noises.

However, if you were on Mars you could never hear the wind directly with your own ears.

If you were foolish enough to expose your ears to Mars’s atmosphere, the low external pressure would cause your eardrums to burst, and you would be instantly deaf as well as having no air to breathe.

If you were to go outside in a pressurised spacesuit (a much more sensible idea), what you would hear would depend on how well the sound waves were transmitted through the solid shell of your helmet, and then on how these were turned back into sound waves in the air inside your helmet.

In other words, you would hear a distorted version of what an external microphone would pick up. Imagine walking round on Earth with your head inside a goldfish bowl and you’ll get part of the idea.

If future human explorers on Mars want to hear what’s going on in the external environment, I suspect they will rely on a suit-mounted microphone feeding to wireless ear buds, although I can’t find any evidence that that this has yet been factored into Mars suit design.

This all boils down to a recording from external microphone being the best way to represent sounds on Mars, or indeed any other planet that has an atmosphere.

If you want to hear some more sounds from Mars, NASA has a collection of audio recordings you can listen to.