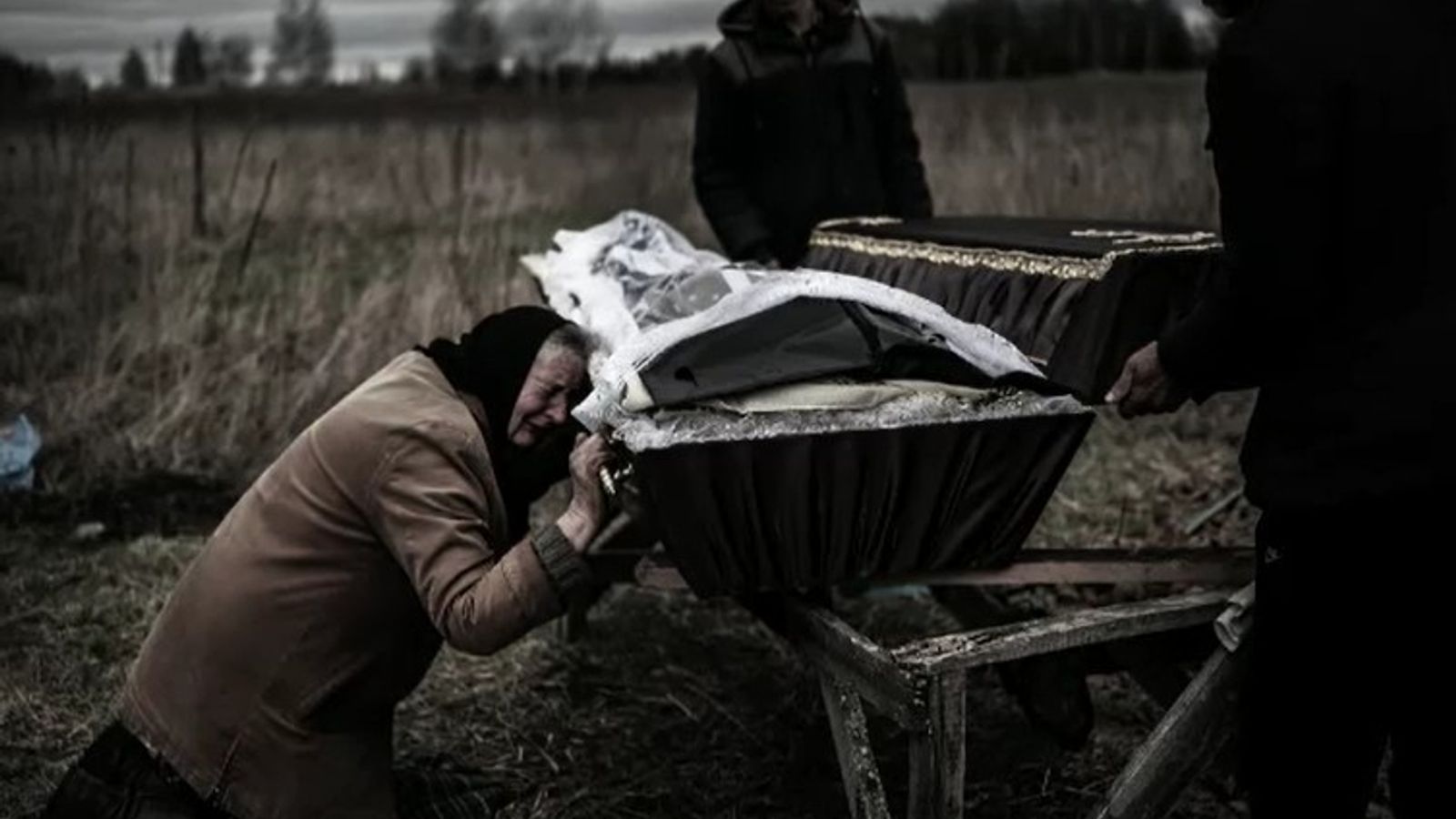 A group of 90 Ukrainian judges will undergo training, provided by the UK, to carry out war crimes trials for Russian soldiers.

The first group of judges attended sessions at a secret location in the region last week, and more will follow in the coming months, as part of a £2.5m investment.

In her first broadcast interview as Attorney General, Victoria Prentis told Sky News it would ensure perpetrators of atrocities can – at an unprecedented scale – be prosecuted while the conflict goes on.

The vast majority of war crimes trials are expected to be carried out in the country by Ukrainian judges.

So far, 14 Russian soldiers have been convicted, with the first trial carried out in May.

But a vast caseload of more than 43,000 reported crimes have already been registered.

“They are prosecuting war crimes in real time”, Ms Prentis said. “This is a live and very brutal conflict.

“Ukraine is managing with all the difficulties that we know are going on in the country at the moment, with things like power and organising courts, to try war crimes.

“This is very important, obviously because justice is important, but also because I hope that those Russian soldiers and officers who are watching the Ukrainian prosecutions at the moment will realise that they must act in accordance with international law.

“These 90 judges will go back after some really intensive training, able better to run those courts.”

Ukrainian President Volodymyr Zelenkyy and his wife Olena, who visited the UK this month, have been advocating for the establishment of a special tribunal for Ukraine, which they have compared to the Nuremberg trials, for the Russian leadership.

The International Criminal Court in The Hague has already opened an investigation into the Ukraine war – but the Zelenskyys say a special tribunal alongside it could prosecute a wider range of crimes.

This has not been explicitly backed by the UK government, but Ms Prentis said all options are being considered, in discussions with the Ukrainian authorities.

“I’m sure that the vast majority of these war crimes will be tried by Ukrainian judges in Ukraine, where the witnesses and the evidence are,” she said.

“But I’m also sure the international community will want to have a moment where justice is done, and seen to be done. We don’t yet know exactly what form that will take. All options are on the table.”

A special court which could try Russian leaders for the “crime of aggression” is now backed by the French government and the EU Commission President Ursula von der Leyen.

In her long career as a government lawyer before entering politics, Ms Prentis said: “I don’t think we ever anticipated we would have war crimes in Europe again and that we would have to start talking about Nuremberg-style trials.”

He spoke to Sky News on his return from the region after the first three-day session.

Sky News teams have witnessed the work of mobile justice teams in the country, such as in Makariv, outside Kyiv, where officials say 130 bodies were found in April.

“I’ve spent 25 years staring either literally or metaphorically into mass graves, and believe me it’s a very different exercise than a single body or a single victim.

“They [judges] are very much aware of the necessity to run these trials in accordance with internationally recognised standards.”

Sir Howard was the judge at the trial of former Bosnian leader Radovan Karadzic and said it was the hope senior Russian leaders could eventually be put on trial – but it would take time and commitment.

He said: “I was told when I was at the ICT [tribunal for the former Yugoslavia], that we would never try Milosevic, Karadzic or Mladic, and we tried all three.

“So you don’t know how the political winds will change direction in the future. It may be a long, slow process, but you cannot entirely rule out the Russians, senior Russians, in politics or in the military could one day come before an international tribunal.”