A fisherman whose crew saved 31 people stranded in the English Channel said he was woken in the early hours of the morning when migrants surrounded his boat “screaming for help”.

Skipper Raymond told Sky News he had been sleeping when he was awoken by a member of his crew, who told him, “There are migrants alongside the boat.”

“One guy was hanging off my wire,” he said.

“I thought at first it was just him, and once I got my fishing gear up – which took about three minutes – I stopped my boat and ran outside and along the port side there were five of them hanging off the side of my boat.”

Raymond said he then counted 45 people holding onto the collapsed dinghy and surrounding his fishing boat.

Four people have now died after the small boat got into difficulty off the coast of Kent in the early hours of this morning. 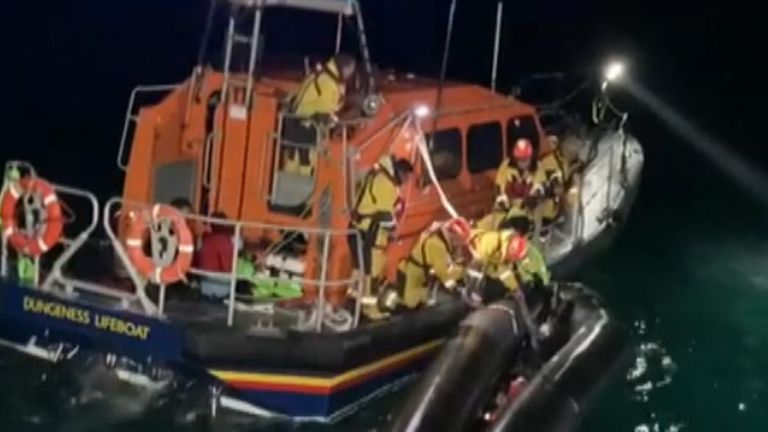 The scene shows migrants being rescued

After the first five were pulled aboard, the rest of those stranded began swimming towards his boat.

“It was like something out of a second world war movie, there were people in the water everywhere, screaming,” he said.

In footage shared with Sky News, the fishing crew can be seen hauling the panicked people over the side of the boat.

“The dinghy started to drift away, so I steamed towards the dinghy and we secured it with a rope to the side of the boat,” he said.

“We were trying to pull them off the dinghy.”

After calling the UK coastguard just before 3am, Raymond’s fishing crew spent two hours pulling people from the water: “Adrenaline kicks in and you find the strength to get these guys safe.”

He said those he rescued came from Afghanistan, Iraq, Senegal and India, and they told him they had each paid £5,000 to a smuggler in France for passage into the UK.

But as the crew began pulling away, taking its passengers into port, they realised one migrant had attached himself to the side of the boat and drowned.

“One of the crew shouted, woah, there’s a rope on the starboard side of the boat.

“The next thing I knew this rope was attached to a dead body.

“We had been concentrating on the port side and this one person had swum to the starboard side, tied a rope onto my fishing gear and tied it around his wrist to keep himself alongside the boat.

“When I put my boat into gear his body floated up.”

A government source said 43 people have been rescued alive and brought to the UK. Some of those rescued were taken from the boat and others from the water.

After being pulled from the water, Raymond says he gave everyone a “lukewarm shower”, to slowly warm them back up.

Read more:
People smuggler says ‘I do not force anyone to get on boats’ on dangerous sea crossings 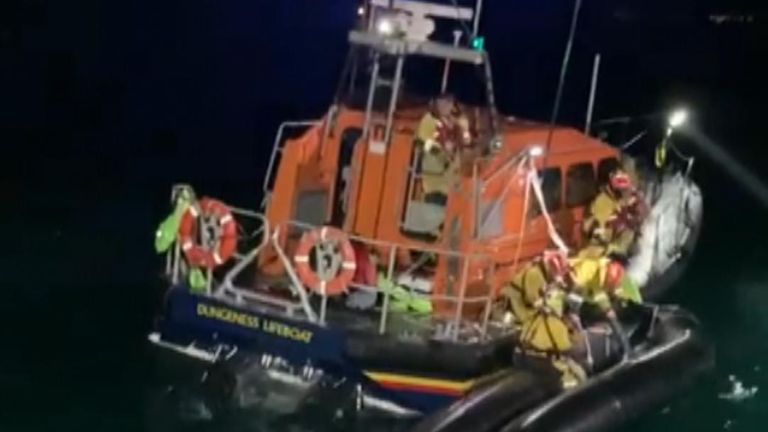 Here’s what we know about the timeline of the tragedy

“We stripped all their wet clothes off, and my crew gave them any clothes they had to keep them warm,” he said.

“We put them in beds to keep them warm, with quilts, to get their body temperature up slowly.”

All 31 rescued by Raymond’s team had survived, he said.

“It was very lucky that the sea conditions were good. It was very cold,” he said.

“When we got into Dover, a medic came down and checked on them and he couldn’t believe how good a condition they were in, none of them had any hypothermia.”

“I just see it as saving human life,” he added.

Searches have continued all day, but more are feared dead given the icy conditions, with temperatures believed to be as low as -4C overnight.

The Maritime and Coastguard Agency said HM Coastguard is working with the RNLI, Royal Navy, Border Force, French navy and Kent Police to look for the boat, while an air ambulance has also been sent to the scene.

A UK government spokesperson said: “We are aware of an incident in UK waters and all relevant agencies are supporting a co-ordinated response. Further details will be provided in due course.”

Home Secretary Suella Braverman said in a Commons statement that it was a “terrible tragedy”, and she had spoken to her French counterpart and is working “closely with the local authorities”.

Delayed and over-budget HS2 may not run to central London for another 15 years – or ever
Six more classified documents found in search of Biden’s home
Does Germany sending tanks to Ukraine mean the US is open to sending their own?
Smith drubs rival Eubank in 4th-round stoppage
For the first time on UK soil, Amazon workers have gone on strike