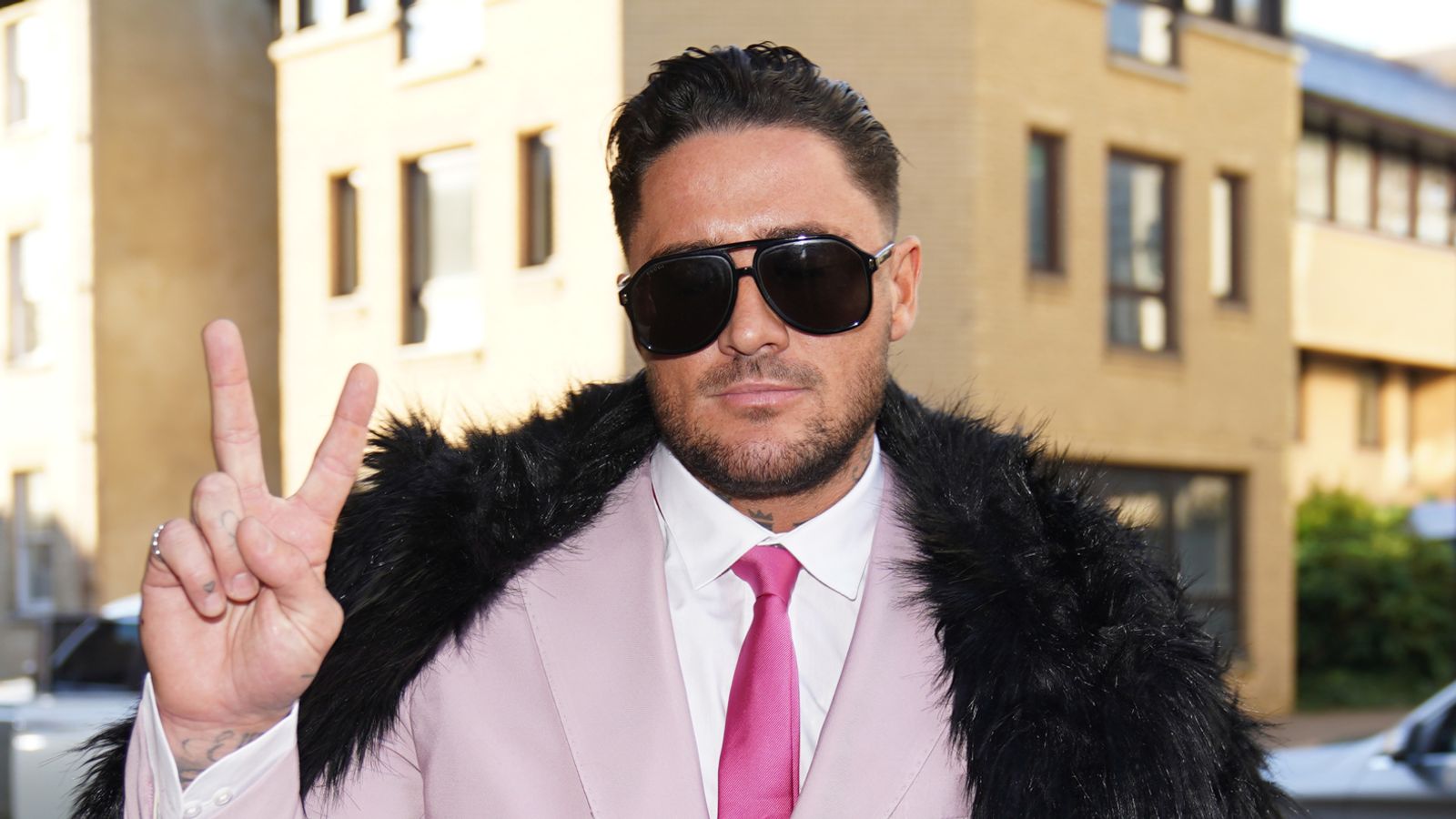 Stephen Bear has been found guilty of sharing a sex tape featuring a fellow reality TV star that then appeared on the online subscription site OnlyFans.

The 32-year-old was accused of voyeurism, and two counts of disclosing private, sexual photographs and films – and was found guilty on all three charges.

During the trial at Chelmsford Crown Court, the jury heard that Bear, who won Celebrity Big Brother in 2016, had sex with his ex-girlfriend and The Only Way Is Essex star Georgia Harrison in his garden before sharing CCTV footage of it on OnlyFans.

Wearing a black suit and tie, Bear looked straight ahead as the jury foreman returned the verdicts after more than eight-and-a-half hours of deliberation.

He then told the court: “My barrister said not to…

“In my opinion from the very beginning it was never a fair trial, what the press said against me.

“I was fighting a losing battle and it is what it is.”

Judge Christopher Morgan responded: “Thank you for that observation.”

Ms Harrison, who waived her anonymity in relation to the case, watched on from the public gallery and appeared to breathe a sigh of relief as the guilty verdicts were returned.

In a statement released through police, she said the “last two years have been absolute hell and this verdict will allow me to start to put the pain I have suffered in the past and start embracing the future”.

Ms Harrison added that she has felt “ashamed, hurt, violated, even broken at times” but now feels empowered after coming through the ordeal.

She had previously claimed she did not know Bear “had CCTV cameras in his garden that recorded them having sex”.

The 27-year-old said that when Bear showed her the footage, she told him “never to send” it to anyone and “made it plain how upset she would be if he did”, said Jacqueline Carey KC, prosecuting.

She claimed she saw Bear send the footage to someone on WhatsApp later that day, and that later that year she was made aware that it was circulating online.

The alleged offences are said to have taken place between August and December 2020.

During his trial, Bear posted a “50% off” deal for his adult entertainment website on Twitter alongside a photo of him arriving at court with his girlfriend Jessica Smith.

The image showed him walking from a hired chauffeur-driven white Rolls Royce to the court building, with the accompanying text reading: “50% off my adult site for the next 24 hours.

Bear had described himself as “like the jack-of-all trades” while giving evidence in court, adding he was also a labourer and did roofing before doing some “TV work”.

He added: “Now I do a bit of adult entertainment because my TV work has been on hold for two years because of this case.”

The judge bailed Bear until January 31 to return to the same court for sentencing, after a report has been prepared about him.

Dani Dyer reveals she is expecting twins and Jarrod Bowen celebrates with double for West Ham
Everything Everywhere leads Oscar nods, as popular films shine
‘Big Oil peddled the big lie’: UN chief slams energy giants for ignoring their own climate science
Does Germany sending tanks to Ukraine mean the US is open to sending their own?
Holocaust survivor describes horror of watching Nazi death squad kill her mother