Money stolen by the former boss of one of the world’s biggest cryptocurrency exchanges was being sent to political candidates to gain influence and impact policy in Washington DC, it has been alleged.

Sam Bankman-Fried, the founder of FTX, has been charged by the US Securities and Exchange Commission (SEC).

The allegations state that from 2019 until earlier this year he “stole billions of dollars” and lied to investors.

The “tens of millions of dollars” sent to political candidates went to both Republicans and Democrats, the attorney said.

“All of this dirty money was used in service of Bankman-Fried’s desire to buy bipartisan influence and impact the direction of public policy in Washington,” Mr Williams added.

The charges allege that Bankman-Fried defrauded investors out of $1.8bn (£1.5bn).

The FBI’s Michael J Driscoll said Bankman Fried “knowingly defrauded customers of FTX through the misappropriation of customer deposits to pay expenses and debts of a different company”.

“In addition, Bankman-Fried executed transactions designed to obscure and disguise the misuse of customer funds. He preyed on his customers, the victims of this case, abusing the trust placed – not only in his company but in himself as the lead of that company,” he added.

Mr Williams described the scandal as “one of the biggest financial frauds in American history”.

Meanwhile, Bankman-Fried’s lawyer Mark Cohen has requested bail for the one-time crypto magnate after Chief Magistrate JoyAnn Ferguson-Pratt ruled that he had the right to apply for it.

He said on Tuesday that Bankman-Fried has had “ample opportunity to flee” but has remained in the Bahamas to “make things right for FTX customers”.

Mr Cohen added that his client’s medications include Adderall and anti-depressants, and that Bankman-Fried does not object to being electronically monitored or checking in at a police station.

Later on Tuesday, Bahamas magistrate judge said Bankman-Fried’s risk of flight is “so great that he should be remanded to custody”.

John Ray, who was named Chief Executive of FTX after Bankman-Fried stepped down and the company filed for bankruptcy on 11 November, criticised the founder’s leadership and explained what led to the collapse of FTX.

Giving evidence in a congressional hearing in Washington earlier, Mr Ray said there was “virtually no distinction” between the operations of FTX and Alameda Research – Bankman-Fried’s first business.

According to the SEC complaint, Bankman-Fried diverted customer funds to Alameda, without telling it.

Mr Ray said the FTX group’s collapse appears to stem from “absolute concentration of control in the hands of a small group of grossly inexperienced, non-sophisticated individuals.”

He added that there was “literally no record-keeping whatsoever” and said employees would communicate invoicing and expenses on Slack.

Congressman Brad Sherman also raised concerns about crypto and said: “My fear is that we’ll view Sam Bankman-Fried as just one big snake in a crypto garden of Eden. The fact is crypto is a garden of snakes. From the outside crypto looks like a non-fungible token…But in reality, the hope of crypto is to be a currency to compete with the US dollar.”

Bankman-Fried was arrested in the Bahamas after authorities there received formal notice that separate criminal charges had been filed against him in the US.

The 30-year-old, whose net worth peaked at $26bn (£21bn), ran the firm from the island until he stepped down as chief executive last month.

Founder built a ‘house of cards on a foundation of deception’

“We allege that Sam Bankman-Fried built a house of cards on a foundation of deception while telling investors that it was one of the safest buildings in crypto,” said SEC chair Gary Gensler.

He has been charged with eight counts, including conspiracy to commit money laundering.

Bankman-Fried is also charged with counts tied to wire and securities fraud, as well as conspiracy to defraud the United States and violate campaign finance laws. 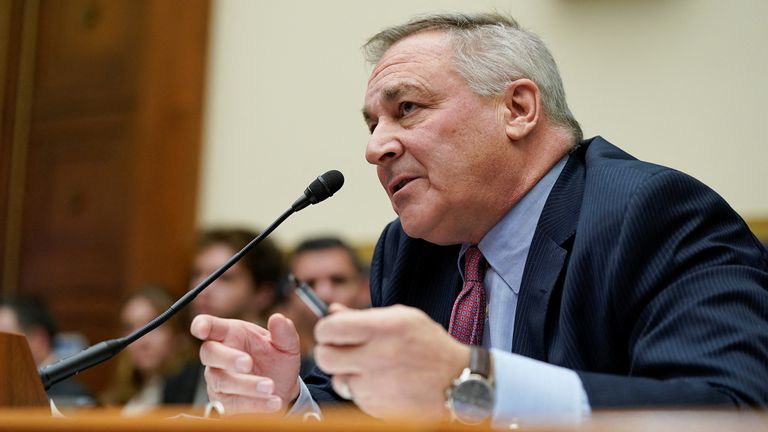 How did we get here?

Regarding the separate charges which led to his arrest in the Bahamas, those are expected to be revealed later.

Bankman-Fried has the right to contest his extradition to face them.

The charges came a day before he was due to testify before America’s House Financial Services Committee.

Read more:
Sam Bankman-Fried: What happened at FTX?
How FTX founder went from star-studded £21bn empire to being charged

Bankman-Fried has been the focus of investigations by both US and Bahamian authorities since the collapse of FTX, which ran out of money in the crypto equivalent of a bank run.

It had been the world’s second-largest cryptocurrency exchange, but was left teetering on the brink of insolvency in early November when larger rival exchange Binance dramatically withdrew from a non-binding bailout offer.

It led other investors to rush to withdraw funds, but FTX could not meet all the requests, as it apparently used its customers’ deposits to cover bad bets at Alameda.

During a string of recent media appearances, Bankman-Fried has insisted he did not “knowingly” misuse customers’ funds and has denied defrauding investors.

However, he has admitted that “clearly I didn’t do a good job” at running FTX.