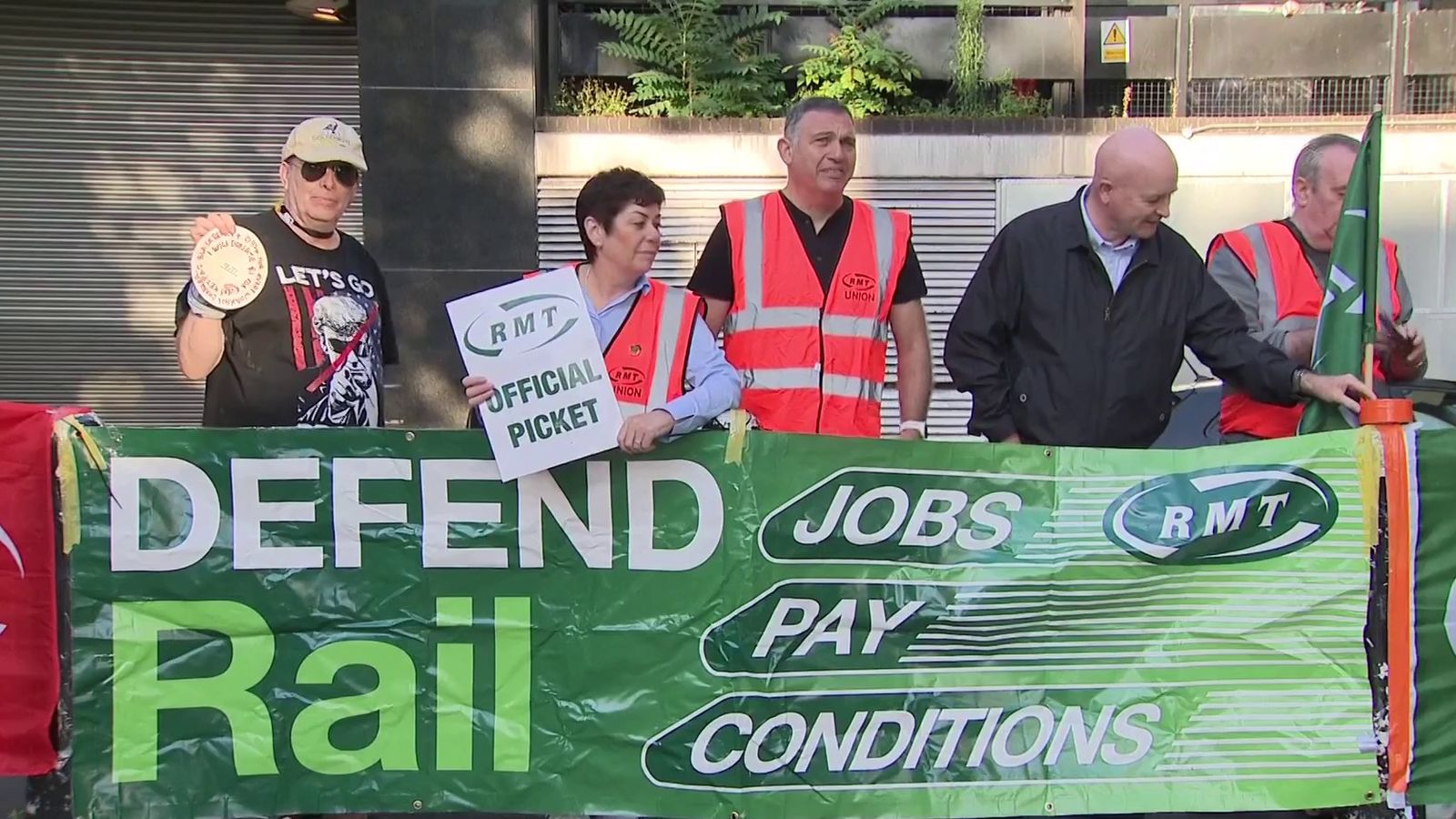 Rail strikes will go ahead this week after union members voted to reject an offer from Network Rail.

More strikes are planned from 6pm on Christmas Eve to 5.59am on 27 December.

It was expected that the offer would be rejected because the union had recommended members do so.

The RMT said the offer included a 5% and 4% pay rise over two years with thousands of job losses, a 50% cut in scheduled maintenance tasks and a 30% increase in unsocial hours.

The rejection “shows that our members are determined to take further strike action in pursuit of a negotiated settlement”, Mr Lynch said.

He blamed the government for the lack of agreement between the union and rail operator.

“The government is refusing to lift a finger to prevent these strikes and it is clear they want to make effective strike action illegal in Britain,” Mr Lynch said.

“We will resist that and our members, along with the entire trade union movement will continue their campaign for a square deal for workers, decent pay increases and good working conditions.”

Read more:
Your refund rights if strikes disrupt travel plans
Strikes every day before Christmas – which sectors are affected and why

Network Rail’s chief executive said the union’s leadership needs to “stop playing politics and work with us” to end the dispute.

Andrew Haines said the rejection was “especially frustrating” because colleagues represented by Unite, a different union, had accepted the same offer.

“Our offer, which is worth over 9%, with a guarantee of compulsory redundancies and no changes to anyone’s terms and conditions remains on the table,” he said.

“Our railway still faces a real financial crisis and because of that, we will continue with the consultation around the implementation of the maintenance reforms.”

The company said it would “work closely with operators to run as many services as possible” but asked passengers to only travel if absolutely necessary.

Huw Merriman, the rail minister, urged the RMT to call off the strikes as he hit out at its leadership for recommending members reject the “generous” offer from Network Rail.

“We do not believe the RMT leadership are speaking for the workforce, certainly not the passengers, and we want them to take these damaging strikes down so businesses can operate over Christmas, passengers can get to their jobs and there will be a future for the railways”, he said.

Rail staff are among hundreds of thousands of workers striking this winter across many sectors.

As inflation-driven cost of living pressures rise, many workers are seeking improvements to pay and conditions.

For the first time in history, members of the Royal College of Nursing are set to strike.They are due to be joined by other emergency workers, including ambulance staff, firefighters and doctors.

Members of the Communication Workers Union are continuing their month-long strike against Royal Mail.

Travellers are braced for chaos on the roads and at airports as bus workers, baggage handlers, Border Force agents and road workers also plan to walk out.

Frances O’Grady, the General Secretary of the TUC, has warned the wave of strikes will continue next year unless the government changes tack and commits to meaningful pay talks.

The union body accused the government of refusing to engage in good faith on pay, “stonewalling” negotiations and hiding behind pay review bodies.

“Unions stand ready to meet and find a solution, but the Conservatives must stop sabotaging efforts to reach settlements,” Ms O’Grady said.

“If we see more industrial action, it is because of their intransigence. Instead the government must come to the table and negotiate.”