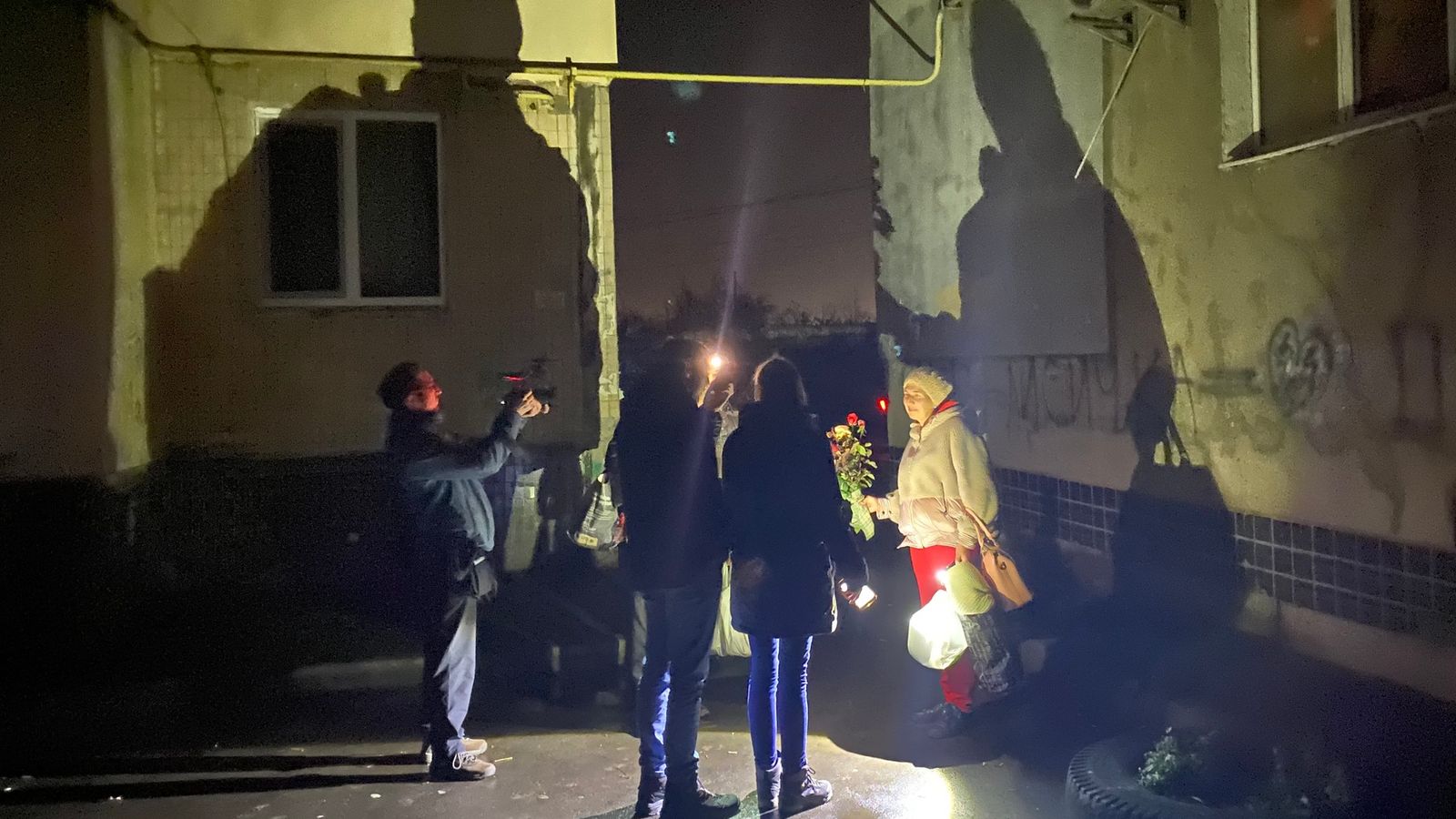 The inside light of a car flickered in the darkness next to a cluster of large apartment blocks in the Ukrainian city of Odesa.

A young couple, wrapped in furry dressing gowns over layers of clothes, were sat in the front seats, charging their mobile phones and enjoying a brief respite from the cold.

Oleh Yaskovets and Natallia Bovkush said they have had no electricity in their actual home for almost two days following Russian drone strikes against Ukraine’s energy infrastructure.

Asked how they were feeling, the pair laughed as they surveyed their predicament.

“Things aren’t great,” said Oleh, 28, behind the steering wheel. “Everything is wet in our flat because of the condensation.”

His wife, 24, in her bright pink dressing gown, said: “It’s 14-15 degrees inside. That’s why it’s more comfortable in our car and a bit warmer.”

Russia launched 15 Iranian-made suicide drones – so-called because they explode upon impact – against electricity infrastructure in this port city and the surrounding Odesa region in southern Ukraine overnight into Saturday, according to President Zelenskyy.

He said his country’s defences managed to shoot down 10, but that five struck their targets, initially leaving some 1.5 million people without power.

Engineers worked through the weekend trying to fix the damage.

By Sunday evening, the lights were coming back on in much of central Odesa city.

Read more:
Putin could use peace talks ‘as excuse to rearm and recruit troops’
‘It’s terrifying to live like this’: Ukrainians under relentless bombardment

But a number of residential areas towards the outskirts remained in total darkness – with streetlights and even traffic lights out.

Much of the country, including in Odesa, is already enduring rolling blackouts at set times throughout the day to preserve what limited power is available in the wake of waves of Russian strikes against power stations, sub stations and power lines since October.

Following setbacks on the battlefield, Russian President Vladimir Putin appears intent on breaking Ukraine’s resistance in a less conventional way – by turning off the heat, light and water.

His forces have used a combination of missile strikes and swarms of Iranian unmanned aircraft to penetrate Ukrainian air defences.

The drone strikes appeared to stop towards the end of last month after Russia exhausted its stockpiles. But they have begun again in recent days, with the UK warning that the Kremlin has likely received a resupply from Iran.

These energy attacks have left whole cities, towns and villages – far from the frontline of the fighting war – in cloaks of darkness for several hours at a time.

But Ukrainian engineers are working around the clock to fight back the only way they can – by repairing the damage.

Ordinary people too are building up their resilience and learning to adapt – wearing lots of layers, using torches and candles and stocking up on bottled water.

They also know to try to do as much as possible when the power does come on to reduce the impact on daily life, such as work and study, when it goes off again.

The authorities have created “points of invincibility” – dedicated buildings such as train stations, schools and other facilities with a more guaranteed supply of electricity and warmth.

Local people can go to these places to plug in, heat up and grab a cup of tea.

We visited a point of invincibility at a fire station in Odesa.

Iryna Kryvonos, 44, said she and her family – her husband, 47, and their two sons, aged 20 and eight – had been without power in their apartment for four days and counting. They were learning new tricks to survive.

Smiling, Iryna, a teacher, said: “We are here in warmth with hot tea, we are charging our gadgets. We even try to play cards at home with candles.”

While people remain defiant, complete blackouts – unlike the more predictable planned ones – are a new level of hardship and could turn an already punishing situation into a wider humanitarian crisis when temperatures plunge during the winter.

Across Odesa, residents were bracing for worse to come from Russia. But they vowed never to surrender.

Anjelina Kartashova and Pavlo Kartashov, in their 50s, used torches to make their way to the entrance of their apartment block.

“Everyone will survive in any way they can,” said Anjelina. “We are waiting for victory and then everything will be fine.”

Her husband added: “We will just put on more warm clothes, but we’ll never give up. Ukrainians are not giving up!”

Sources: Suns’ Booker could return for Nets game
UK to host summit in bid to ban Russia from 2024 Olympics
‘Utter shock and disbelief’: Head of Epsom College found dead on school grounds with husband and daughter
There’s a buzz about green hydrogen. But pink, produced using nuclear, may have a huge role to play too
Newgate wins race run only by 4 Baffert horses