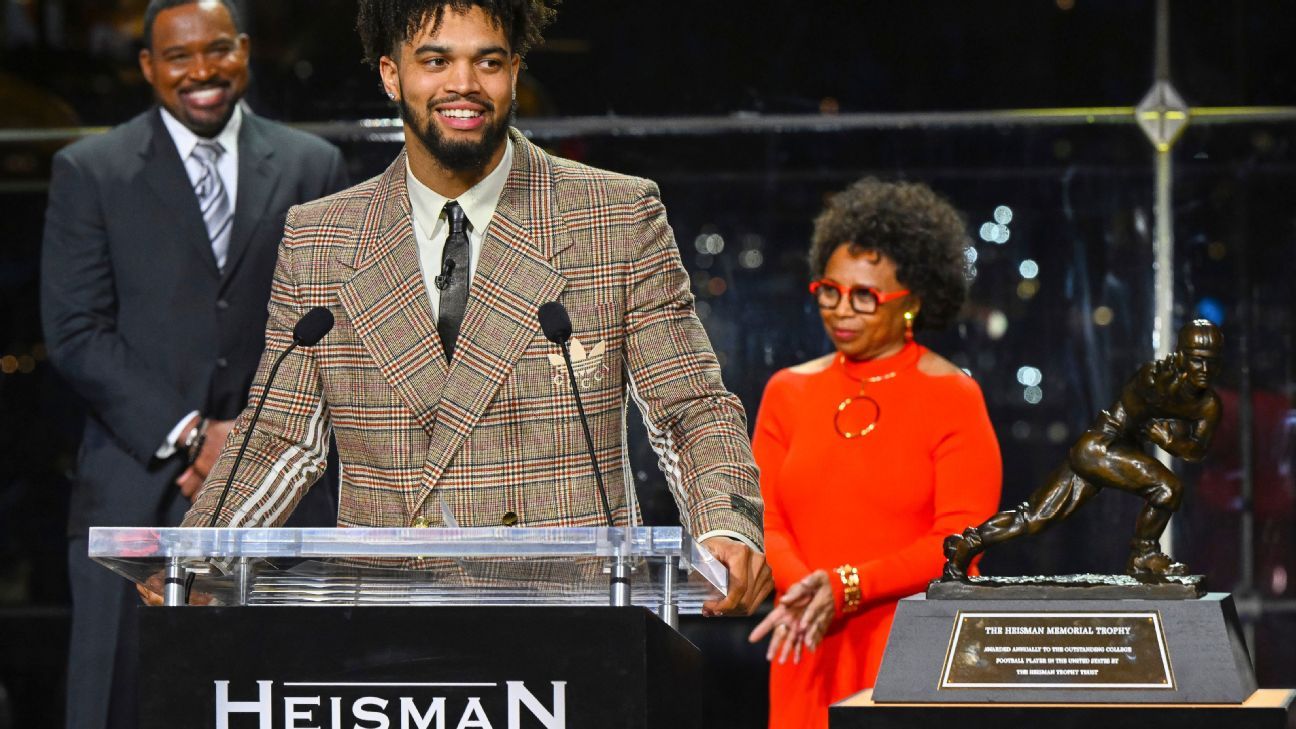 Fourteen months ago, USC quarterback Caleb Williams was a freshman backup at Oklahoma entering the Red River Rivalry game against Texas hoping to give the Sooners a spark.

Now, the 20-year-old is a Heisman Trophy winner.

On Saturday in New York, Williams — much like he did on the field this year — left no doubt that the Heisman was his, securing the award given to the most outstanding player in college football in a decisive victory. Williams outraced Georgia‘s Stetson Bennett, TCU‘s Max Duggan and Ohio State‘s C.J. Stroud for the award.

“I may be standing up here today, but y’all get to go to the College Football Playoff,” Williams said in his acceptance speech, in saluting the other finalists in front of him. “Guess you can’t win them all.”

Over the course of 13 games this season, the former five-star recruit from the Washington, D.C., area dazzled with his play, throwing for 4,075 yards and 37 touchdowns and rushing for 372 yards and 10 touchdowns, with only four interceptions.

He did it with a display of consistent efficiency and an array of highlight plays that left teammates, coaches and fans alike in awe. His creativity and vision when plays broke down resulted in almost never throwing the ball away, but instead turning scramble plays and potential sacks into electric runs or miraculous passes.

Williams’ performance went beyond the numbers and highlights, too. After head coach Lincoln Riley left Oklahoma for USC in November 2021, Williams followed and became the fulcrum for the Trojans’ turnaround from a 4-8 season to an 11-win team.

“While this may be an individual award, I certainly understand that nothing, in this sport or life, is done alone,” Williams said.

Despite his age, Williams was tasked with a crucial responsibility once he joined Riley in moving from Norman, Oklahoma, to Los Angeles via the transfer portal. He was one of the only players who was intimately familiar with Riley’s style and his offense. At 19, Williams became one of the captains of the team and, on offense, a second coach on the field.

Though the Trojans fell one game short of winning the Pac-12 title and playing in the College Football Playoff, Williams’ leadership during a year of transition for USC helped the Trojans have one of the best turnarounds of the sport. Williams and USC are likely to enter 2023 as both Heisman and title contenders, respectively.

A product of Gonzaga College High School in Washington, Williams is the seventh official USC player to win the award (though Reggie Bush’s 2005 Heisman remains vacated) and the third quarterback from the school. He’s the first Trojans quarterback to win since Matt Leinart in 2004.