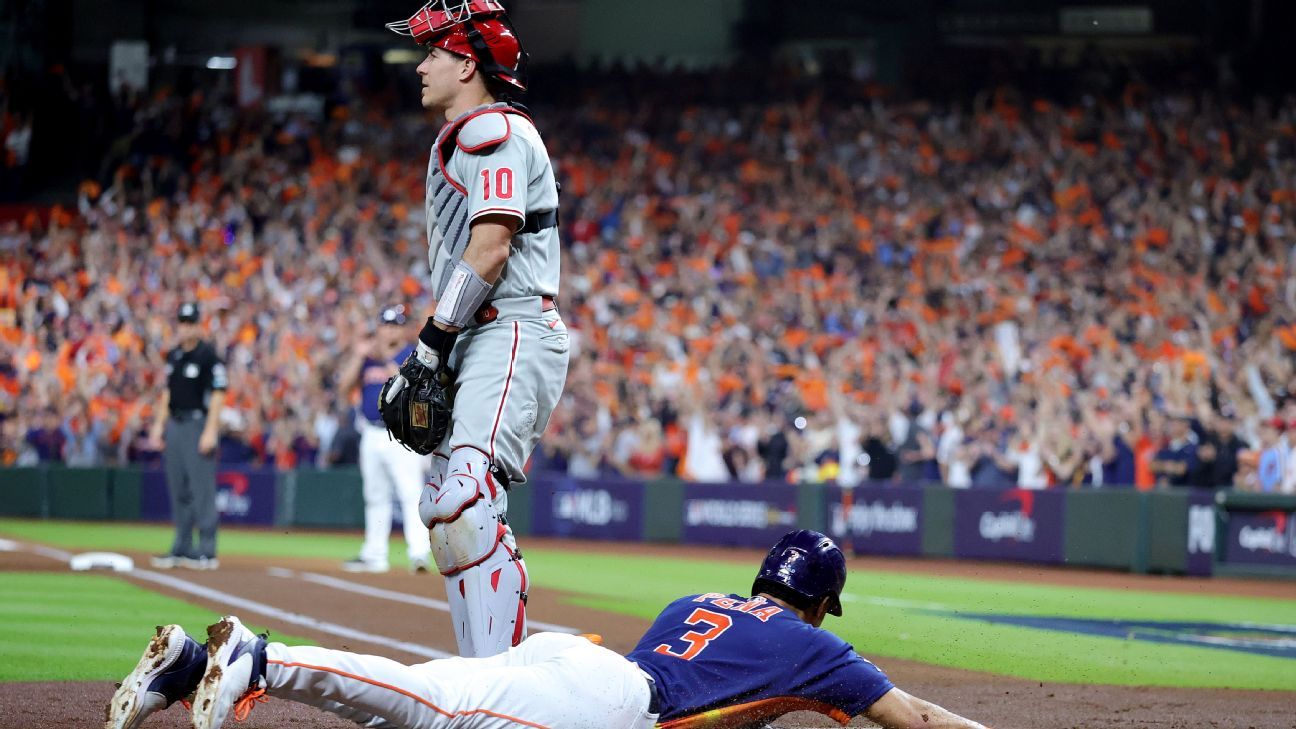 Two games into the 2022 World Series, there has been no shortage of drama on the field in Houston.

First, it was the underdog Phillies storming back from a 5-0 deficit in Game 1 and handing the Astros their first loss of the postseason thanks to J.T. Realmuto‘s game-winning 10th-inning long ball.

Then, it was Houston’s turn to remind everyone why they were such a heavy favorite to begin with by scoring three first-inning runs against Phillies ace Zack Wheeler in a series-tying 5-2 Game 2 victory.

With a travel day Sunday before the Series shifts to Philadelphia for three games beginning Monday night, we asked ESPN MLB experts Bradford Doolittle, Joon Lee, Jeff Passan and Jesse Rogers to break down what they’ve seen so far and what we should expect from here.

What has surprised you most about the first two games?

Lee: The continued struggles of Justin Verlander in the World Series. For someone who has such a storied career, it’s truly remarkable that the Astros ace’s 6.07 ERA is the worst among all starting pitchers with at least 30 innings pitched in the World Series. His inability to hold the lead opened the door for Philadelphia to beat the juggernaut Astros in Friday’s opener, and if the Phillies end up raising the trophy, that will have set the tone.

Rogers: Aaron Nola and Wheeler getting knocked around to the tune of 10 runs (nine earned) in their two starts. Wheeler, in particular, left too many pitches over the plate in the two innings he gave up runs, and neither pitcher looked very sharp. The Phillies need their two aces to be much better in their next outings.

Passan: The impermeability of the Phillies’ bullpen. Entering the Series, Phillies relievers were good enough — a 3.19 ERA, 53 strikeouts in 42⅓ postseason innings — but nothing compared to the Astros, whose bullpen allowed three runs in 33 innings, all on solo home runs. Between the 5⅓ shutout innings relieving Nola in Game 1 and three more scoreless picking up Wheeler in Game 2, Philadelphia’s pen is performing like a weapon. Whether it can do so deeper into the Series may make or break the Phillies.

Doolittle: I had wondered how the Phillies would navigate around the Yordan Alvarez/Kyle Tucker section of the Houston lineup late in close games once Jose Alvarado was spent. Rob Thomson was way ahead of me by using starter Ranger Suarez in the first game as a second bullpen lefty. But Suarez will be starting Game 4, presumably taking him off the table as a relief option in either of the next two games, so my curiosity remains.

Was the Phillies’ Game 1 victory a mirage, or will they hang with the Astros from here?

Doolittle: It wasn’t a mirage — unlikely as it is for the Phillies, or any team, to overcome a five-run deficit in a World Series. The Astros are still in good shape, but as long as the Phillies’ bullpen keeps answering the bell, we should be in for more tight games and some dramatic moments. Houston is still favored, but it’s a best-of-five now and Philly has the home advantage after the split.

We’ve got you covered this October with the latest schedules, results, news and analysis.

Lee: Even though I think the Astros are going to win this Series, I would be really surprised if the Phillies don’t pull out at least one, maybe two games during their three games at home. Philadelphia’s lineup made things interesting in the eighth inning of Game 2, making it tighter than the final box score would suggest — and I expect this to continue into Games 3, 4 and 5.

Passan: This series has all the hallmarks of a long one: a split to start, offenses capable of getting conflagrant at any moment and bullpens that are performing at an elite level. Of the 59 World Series to start with a split, 45 of them went to at least a sixth game, according to ESPN Stats and Info. And if this series follows suit and returns to Houston, it’s bound to be a coin toss between two very talented, very motivated teams.

Rogers: The Phillies can definitely hang with Houston — I thought that before the Series — especially considering they’re going home for three games. After Game 2, players in both clubhouses were discussing the Philly crowd and the electricity it’ll bring. Houston won’t be intimidated, but the Phillies won’t get swept there, either — no way. All to say: It’s going to be a long Series.

How do you expect the atmosphere to change now that the Series is headed to Philly?

Rogers: With all due respect to Astros fans — and it could be due to their building’s acoustics — it is likely to be louder and more chaotic in outdoor Citizens Bank Park than it was in indoor Minute Maid Park. Phillies fans have been a difference-maker, according to their players, for a team that has gone 5-0 at home this postseason. It’s going to be wild in Philadelphia for these next three games.

The Astros are American League champs once again! Check out all our coverage from their journey back to the World Series.

Inside Verlander’s return to dominance &#187

Lee: Astros fans have been loud and rowdy during the World Series, but Phillies fans are thirsty for their first championship since 2008. Between the Phillies’ success and the Eagles’ strong start, Philadelphia has a lot to cheer about right now, and I expect that energy to transfer over. And to give you some anecdotal evidence of how rowdy this Phillies crowd could get: A friend from college sprained his ankle while celebrating Rhys Hoskins‘ third-inning homer in Game 5 of the NLCS and stayed the rest of the game. “I’ll smash my other foot if it locks in a title.” Expect that kind of energy for Game 3.

Doolittle: More people rooting for the Phillies? It’ll be a different vibe and a wild one. Cooler weather. No option to close a roof. This shouldn’t be a huge factor, though. The Astros have a core of players who have won plenty of postseason games on the road, including the World Series. Houston has actually been more successful away from home during the Fall Classic during this current window of winning.

Passan: The Phillies are the only team in sports whose nickname directly descends from the name of the city, and that city happens to be populated by people who will tattoo the Phillie Phanatic around their bellybutton. So it’s no surprise that the get-in price for Game 3 is more than $700. If for some reason you still think Citizens Bank Park isn’t going to be the most rowdy, festive, ridiculous joint this postseason, well, you’re probably from Houston.

Who is your World Series MVP so far — and will he take home the award in the end?

Doolittle: Seems pretty wide open. I don’t think anyone has impacted one of the wins more than Realmuto in Game 1 or Framber Valdez in Game 2. I’d probably split the vote between them right now. Then I’d point out that Jose Altuve is heating up and will probably end up winning it at the end.

The Phillies are headed to the World Series! Check out all our coverage from their unlikely journey to the Fall Classic.

Rogers: Valdez. He came along at the right moment for the Astros after they dropped Game 1. Imagine being down 2-0 then going to Philadelphia — this Series would probably be over. I believe Valdez will win it in the end as well. He still has another great outing in him even after throwing 104 pitches Saturday night.

Lee: For now, Realmuto. If the Phillies are able to win the World Series, it will be because they were able to take one of the first two games in Houston — and that does not happen without the Phillies’ slugging catcher.

Passan: Generally speaking, positional adjustments are far more important over a large span of games. But when it comes to catcher, the demands they face in a short series — especially of immense consequence like the one that crowns the champion — need to be weighed heavily. Which means that as brilliant as Valdez was in Game 2, Realmuto almost single-handedly winning Game 1 and playing his typically excellent baseball in Game 2 makes him the choice. He’s not a bad bet for the rest of the Series, either.

Would you like to revise your original World Series prediction?

Doolittle: Astros in 6? Seems about right. Haven’t seen anything that would make me change my mind.

Lee: The Phillies have had an incredible playoff run, but I still think the talent of this Astros team will win out in the end.

Passan: Ask me after Game 4.

Rogers: I had the Astros in 7, and as much as I like the Phillies’ mojo, Houston’s pitching will be the difference over the long Series.