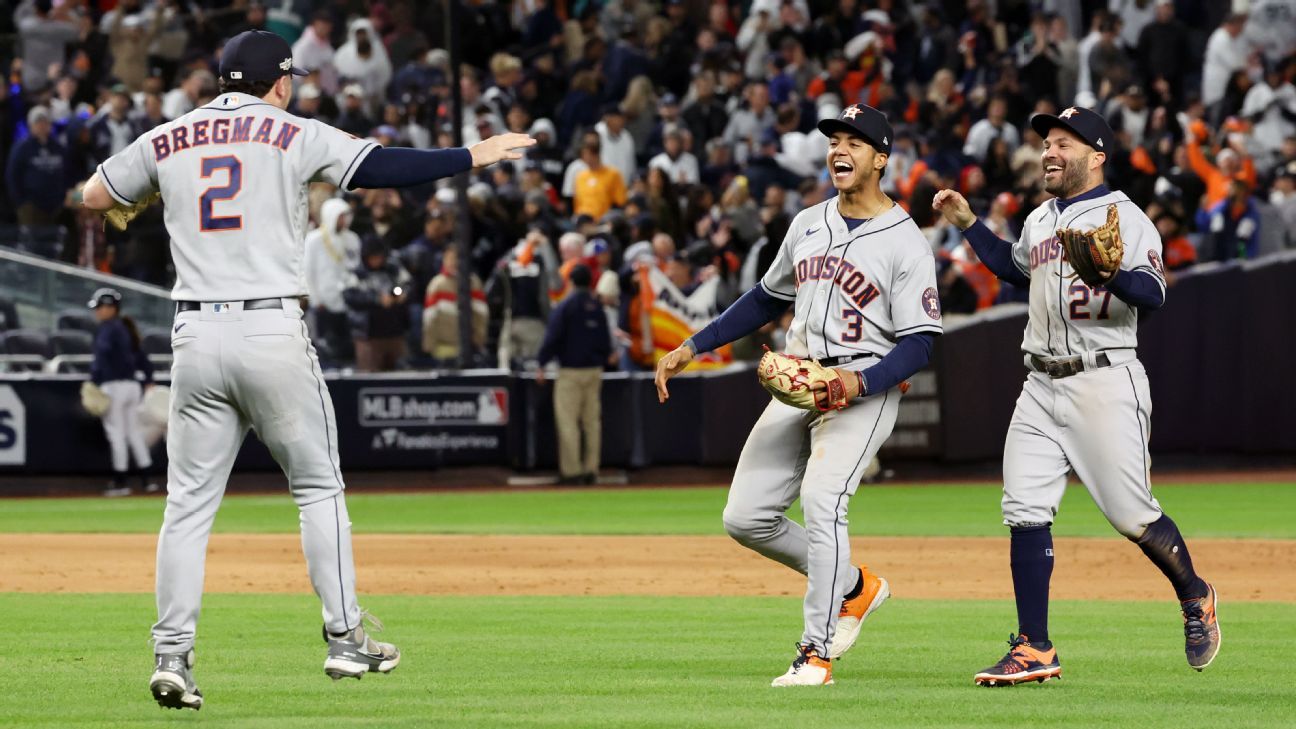 NEW YORK — There’s a hardness to this Houston Astros team, one honed by years hearing every insult imaginable, existing as flypaper for vitriol, living a life of perpetual villainy. It’s something that, by now, everyone who wears the uniform understands won’t wane, because the narratives that surround them are more stone carvings than pencil drawings. For all their magnificence, all the brilliant baseball they’ve played in their first seven games this postseason, the Astros, to those outside the Houston metropolitan area, won’t ever be anything other than the worst version of themselves.

Even with a mostly turned-over roster, that will not change. And accepting that — not embracing it but bearing it — has taken this exceptional group of baseball players and supercharged it. The Astros are going back to the World Series for the fourth time in six years. They finished an American League Championship Series sweep of the New York Yankees on Sunday night with a 6-5 victory that booked a date Friday in Houston for Game 1 against the National League champion Philadelphia Phillies.

That they did it by erasing a pair of deficits and scratching out another one-run victory — their fourth in seven games during this undefeated postseason sojourn — fit this team. The Astros have done what any group abiding the weight of its own misdeeds might: absorbed the negativity, internalized it and converted it into fuel. For some, it propelled growth, for others anger. For everyone, it’s something.

“The scorn that we take — this team is mentally strong,” Astros manager Dusty Baker said. “Sometimes when you go through adversity, it makes you stronger.”

Make no mistake, this Houston team is strong — mentally, physically, emotionally. It succeeds in spite of its failures and because of them. One can accept that the Astros’ sign-stealing scheme during the 2017 season sullied their World Series victory while acknowledging that what they’re doing in 2022 — placing themselves on the verge of an all-time postseason run — is wondrous, cognitive dissonance be damned.

Just look at the scores of their seven wins: 8-7, 4-2 and 1-0 in the division series against Seattle, followed by 4-2, 3-2, 5-0 and 6-5 against the Yankees. Six of the seven games taut, tight, capable of going sideways at any moment. But none did. The Astros defused bomb after bomb, stared down situations tense and intense, and emerged on the better end each time. And now they find themselves in rare company, alongside the 1976 Cincinnati Reds and 2007 Colorado Rockies, who went 7-0 out of the gate in the playoffs, and one win shy of the 2014 Kansas City Royals‘ record of eight straight wins to start a postseason.

The Astros are American League champs once again! Check out all our coverage from their journey back to the World Series.

Inside Verlander’s return to dominance &#187

The red-hot Phillies, fully embracing the team-of-destiny rhetoric that rightly accompanies a group that rode a No. 6 seed to the World Series, are all that stand between the Astros and perfection. That an unbeaten postseason is even a possibility in an October that saw the 111-win Los Angeles Dodgers and 101-win Atlanta Braves and New York Mets teams bow out in their first series reinforces the aberrant nature of Houston’s run.

“Today was really the first time I thought about it,” said Lance McCullers Jr., the Astros’ Game 4 starter and one of just five players left from the 2017 team. “I saw a lot of people making a big deal about an undefeated postseason. It really hadn’t hit me. I mean, baseball is so hard. These teams are so good. Like, Seattle, I said it the other day: I don’t think anyone else could beat Seattle. They were playing unbelievable. We come here [to New York] — once again, close games. We just scratch and claw and find a way.”

Since baseball’s postseason expanded in 1969, only the Big Red Machine have run through a postseason blemish-free, back in ’76. In the wild-card era, the closest to flawless were the 2005 Chicago White Sox and 1999 Yankees, who went 11-1. An 11-0 mark remains a moonshot for the Astros, too, with the Phillies primed to start Aaron Nola and Zack Wheeler in Games 1 and 2 and left-hander Jose Alvarado and right-hander Seranthony Dominguez getting four needed days of rest and a Bryce Harper-led lineup carving pitching staffs for the better part of a month.

But it’s by no means out of the realm of possibility. In seven games, Astros pitchers have held opponents to a .178/.248/.291 line — essentially turning a pair of playoff teams’ lineups into nine hitters who would be demoted to Triple-A for ineptitude. In 33 innings, Astros relievers have allowed two runs — a 0.55 ERA — on 14 hits and 10 walks while striking out 42. Their everyday players have committed just one error, and a borderline one at that, on a bad-hop, in-the-hole backhand from Jose Altuve that precipitated an offline throw. And they’ve managed to score enough to win, despite Altuve’s offensive disappearance and, in the ALCS, New York keeping Yordan Alvarez in check.

Near perfection with room for improvement is a frightening combination, and yet that’s where these Astros are: in their fourth Fall Classic in six years.

“Baseball is wild,” McCullers said. “The reason you don’t see a lot of teams going to so many postseasons, so many league championships, so many World Series is the game isn’t played on paper. The best teams don’t make it every year. They don’t win every year. And somehow, some way we’ve found ourselves the best team in the American League the last few years. We’ve won the American League championship many times. Now, we’ve gotta try to finish it off.”

They couldn’t in 2019, when they lost in seven games to the Washington Nationals, or in 2021, when Atlanta ambushed them and won a championship in six games. This year, though, they’re determined to — for Baker, who is more than 2,000 wins deep into a managing career that still doesn’t include a championship, and for Michael Brantley, the veteran left fielder missing the postseason following shoulder surgery. They want to do it as the ultimate validation for McCullers’ and Justin Verlander‘s returns from arm surgeries. And they want to do it to put to rest the idea that the only way the Astros win championships is by cheating.

Nobody in the Astros’ dugout was banging on a trash can Sunday, and still, there they were, down 3-0 and without a droplet of sweat on their brow. Rookie shortstop Jeremy Peña, the ALCS MVP, launched a three-run home run to tie the game. Later, trailing 5-4 in the seventh inning, the Astros parlayed an error on a potential double-play ball hit by Peña into a deluge: first an Alvarez RBI to score Altuve, then a go-ahead RBI single by Alex Bregman to plate Peña. At that point, Baker turned to Bryan Abreu, who threw a scoreless inning, followed by Rafael Montero and Ryan Pressly, who continue to overwhelm hitters.

This is an idealized version of the Astros — one better than everyone else at run prevention and plenty good with the bat to make that stinginess stand up. They are an exquisitely constructed unit that marries stars with depth and spits on the vagaries of small-sample baseball that define October. And what those in the opposite dugout or their opponents’ stands think about that simply doesn’t matter to them.

“I mean, it’s not like Tupac. It’s not us against the world, you know?” Baker said — and he said it with conviction, perhaps having convinced himself that really is the case, even when evidence suggests otherwise. Part of his job, as manager, is to write his own narrative, to grab a hammer and chisel and etch the Astros a different kind of history. Houston brought him in during the aftermath of the scandal to help forge a new identity, which was an impossible task, really.

Baker, like everyone in the Astros’ clubhouse, takes the most convenient pieces and parts of the past and leverages them to create a new future. Though these Houston Astros aren’t those Houston Astros, they cannot deny that their past informs their present. It helped make them who they are. And that’s the team that the Yankees and Mariners and everyone else in baseball wants to be.

BlockFi lawyer tells bankruptcy court that the priority is to ‘maximize client recoveries’
Boy, 16, arrested on suspicion of murders of two teenagers after fatal stabbings
Drivers are increasingly ditching Toyota and Honda gas cars in favor of EVs
Rishi Sunak declares ‘golden era’ between UK and China over as he calls for new approach
Defying forecasts, crude oil prices have wiped out most of this year’s gains and could head lower