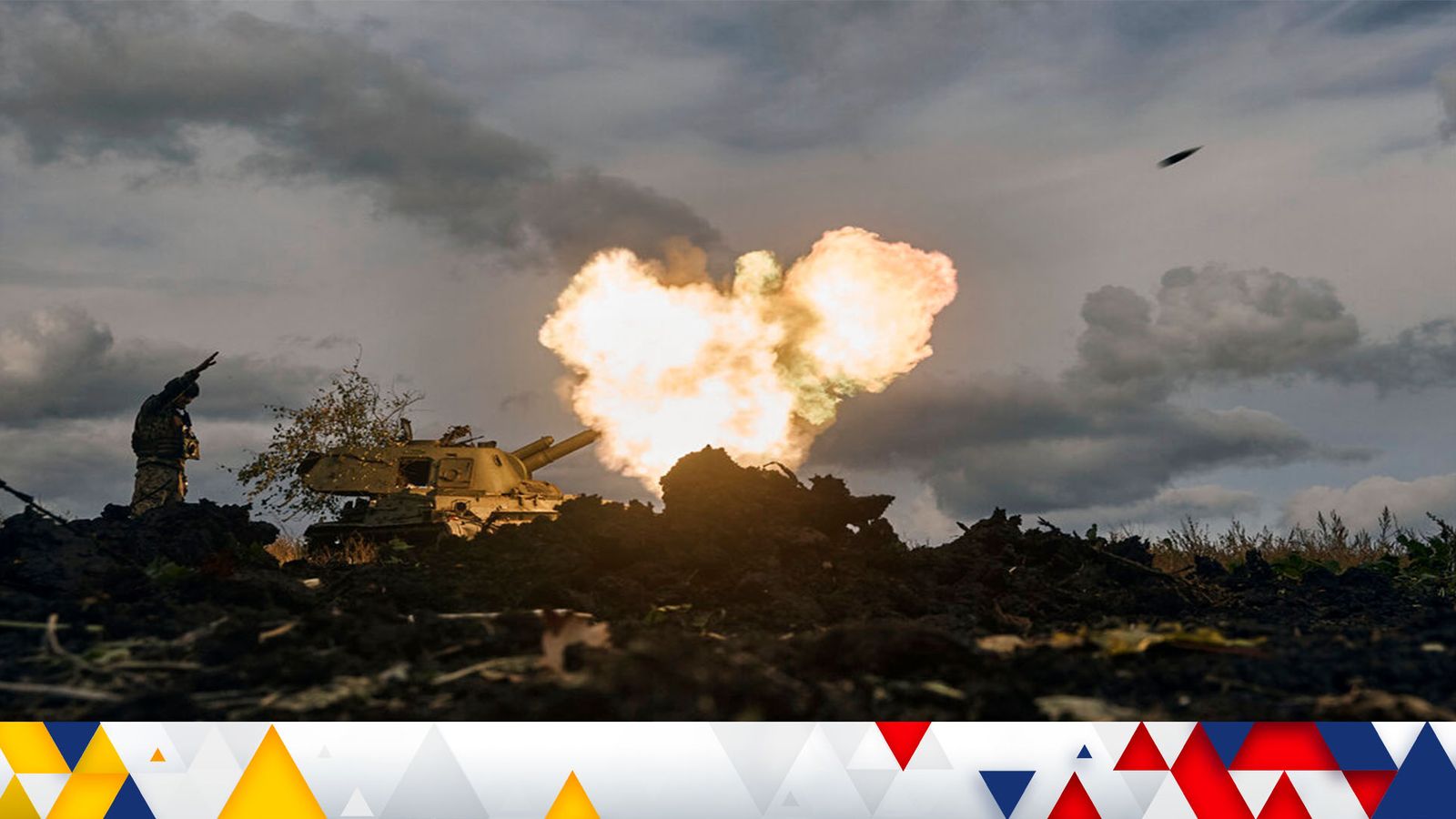 In the centre of Kyiv – protected by checkpoints, sandbags, soldiers and guns – stands the city’s military heart.

It is here that we meet Oleksii Danilov, head of the country’s national security council – President Zelenskyy’s most trusted security adviser.

Mr Danilov is not a shrinking violet. We speak for 20 or 30 minutes, during which time his dark gaze never moves from me and his focus never dips. He is resolute the war will be won and Russia will suffer its consequences.

Determined, too, that we should know the respect and affection he holds for the United Kingdom. Does he, I wonder, have a message for the new prime minister?

“I am more than sure that the next prime minister will do the same for our country, as Johnson and Truss did, and it will be a continuation of the great help that the people of Great Britain are doing.

“We have a great common cause, and we are aware that we are on the side of the light of the whole of Europe and the whole civilised world. In adding to military aid, training our soldiers and accepting our refugees, Britain has offered us the help of a joint family. And this moral help is very important. It is unsurpassed.”

His cheer fades, though. We talk about a succession of grim challenges. The missiles and drones, for instance, that have rained down on some cities and towns, destroying critical infrastructure and imperilling the nation’s power supply.

“These are the things on which people’s lives depend – the work of hospitals, schools, and the lives of the elderly. This is humanitarian terrorism,” he says.

Then there is the Kakhovka dam, which he says has been mined by the Russian army “with a huge amount of explosives”.

Read more: What is a ‘dirty bomb’ and is Russia planning to blow up the Nova Kakhovka dam?

There are claims Russia could blow it up in order to stop Ukrainian troops advancing towards Kherson.

“We will have to wait and see but if they do blow it up then the idea of water supply in Crimea will be gone for 10 or 15 years, or maybe forever.

“Then the question arises as to why they want Crimea if they are going to leave it without water.”

As for Kherson itself, he says the situation is “not easy” but that he does not expect Russian troops “to retreat on their own… they have their own plan, which I think we understand”.

He is, I think, laying the ground for a potentially brutal battle.

He fears, too, that a new front could open in the north.

Russian troops are reportedly massing in Belarus (a country for whose leaders Mr Danilov reserves a particular disdain), raising the spectre of them crossing the border and heading south towards Kyiv. It is, he tells me, a subject he had discussed with Mr Zelenskyy just before we met.

“Belarus has been occupied by the Russian Federation for a long time,” he says, gaze still full-on. “Russia does everything it deems necessary there, especially when that concerns the military sphere and the work of the Russian special services. In fact, they are under occupation.”

So could Belarus be the base for an attack?

“Yes, indeed, from that side, after a certain period of time, certain unpleasant events may occur for our country. They have worked out this question. And they can in a short period of time transfer a large number of their troops precisely by air and rail to Belarus.”

He tells me that Ukraine does not have a “dirty bomb”, despite the claims of the Kremlin, and doesn’t have the necessary material (“since 1994 when we gave everything [Soviet-era nuclear weapons previously stationed in Ukraine] to Russia free of charge”) and “we would not deal with this issue anyway – we are not North Korea, or Iran or Russia”.

And then we get to the awkward bit of the interview.

Before meeting Mr Danilov, I had canvassed the view of a few senior European diplomats. One topic kept cropping up – what could end the war? Would Ukraine accept a deal where, for instance, it gave up the land occupied by Russia since 2014 in exchange for, say, NATO membership?

“I don’t know who you talk to in Europe and what these people have to do with our independence,” he says, frowning.

“Let me remind you. At one time, a French figure [he refers to former President Nicolas Sarkozy] tried to negotiate with Russia regarding Georgia, Georgia lost part of its territories. After figures from France and Germany forced us to sign the Minsk agreements [in 2014], we lost part of the Donetsk and Luhansk regions. But we didn’t stop fighting for them, and we didn’t stop defending it, because it’s ours.

“This is our constitution, this is our laws, this is our land. Let them [European leaders] give their land to Putin. I want to see how their community, their constituents, and their children will react.

“Look, you can’t incite terrorists. Because in the future, their desire to capture, capture and capture once more will only increase. This is a dangerous practice. They made an example of Fascist Germany. So we have a very good memory. Now Putin is not much different from Hitler – he is just a modern Hitler.

So how, I wonder, can Ukraine and Russia ever be reconciled. After all, even when the war is over the geography won’t change – they will still share a long border.

“Firstly, I do not see that Putin will be in power for long,” Mr Danilov says. “He is doing everything in his power to make Russia fall apart. It is Putin who is destroying Russia with his actions. 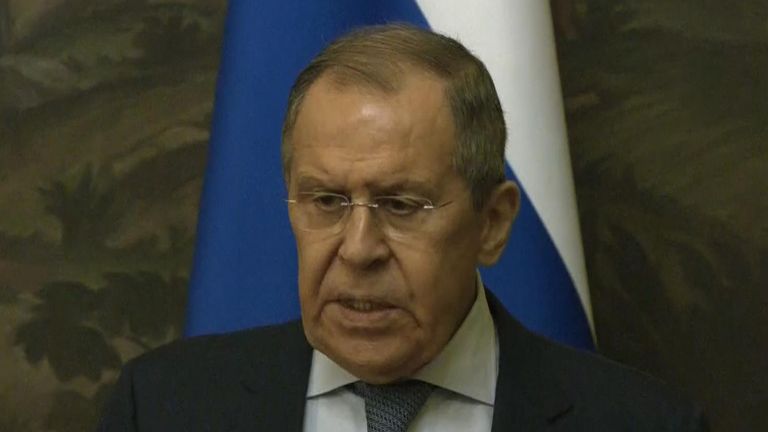 And this is the view that intoxicates and inspires so many people in Ukraine – a story of total victory: that Ukraine will prevail, Russia will be vanquished and Mr Putin will fall.

The truth is that there are many across Europe who do hope for a deal to end the war but I suspect they will have a hard time convincing Mr Danilov.

For the past eight months, Ukraine has been telling its people that they are fighting to save all of their country.

To move the goalposts now would be hard.

“Our society,” he says, “demands the liberation of all our lands from the Russian invaders.”

He neither looks nor sounds like a man ready to change his mind.

Weird Alibaba: A solar-powered $10,000 inflatable electric houseboat
PM faces first test at ballot box as Chester voters prepare to have their say
The protesters on streets across China know what will follow for them
Standards war? Things heat up between Tesla and CharIN
Musk would back Trump rival in 2024 election – with former president under fire for dining with white supremacist