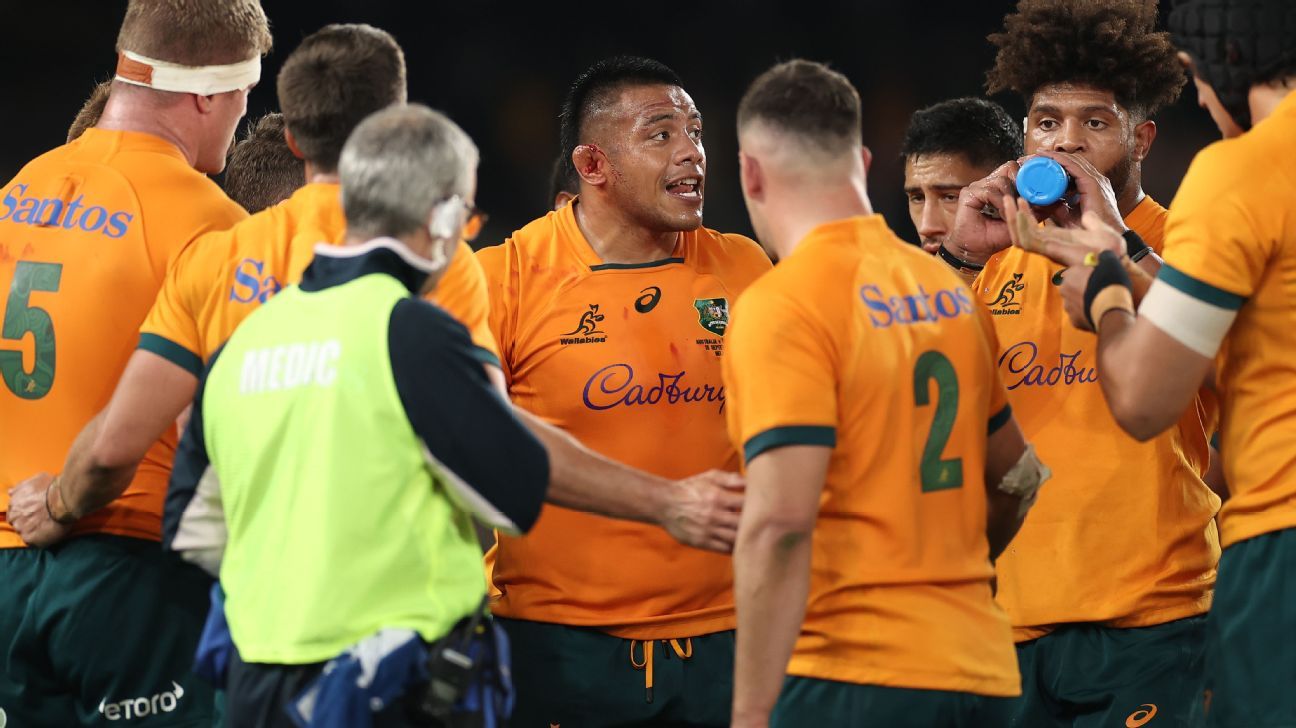 The Wallabies say they have taken onboard the lessons of Thursday night’s dramatic Bledisloe Cup loss to the All Blacks, insisting they will be better prepared for similar situations should they arise in the future.

As the fallout from French referee Mathieu Raynal’s controversial time-wasting call continues, Australia have done their best to put the decision behind them and switch focus to the return Test at Eden Park on Saturday.

But they first conducted a thorough review of the 39-37 defeat, the 80th minute incident in particular, in a bid to avoid such a vital mistake in the future.

“I think one [lesson] is just getting a clear call, and then executing it straight away,” Wallabies prop Allan Alaalatoa said when asked what his team had identified from the incident.

“That was probably the big two learning points from that little scenario at the end of that game because it was clear that we were going to kick for touch. So we just wanted to call there to exit the game better.”

Raynal’s decision not only caught the Wallabies off-guard, despite the referee having previously warned the Australians earlier in the Test and then insisting “we play now”, but so too the majority of the rugby world with players, coaches, commentators and fans alike struggling to recall a similar time-wasting decision.

And Alaalatoa, too, joined his coach Dave Rennie and captain James Slipper, as well as All Blacks vice-captain Sam Whitelock, in saying he had never seen such a call, a situation he now knows is possible and will seek to avoid in the future.

“I’ve never been part of the game when that happened before,” Alaalatoa said. “But now we’ve learnt that in the process of making those decisions, we need to be better, especially for myself as a leader and other leaders that were out there on the field at that time.”

Lalakai Foketi, the man responsible for winning the penalty that at that point look to have gotten the Wallabies home, or at least afforded them to close the game out with 30 seconds, meanwhile echoed Bernard Foley’s earlier sentiments that there was a lot of confusion out on the field after vision of the centre screaming for his fly-half to take the kick showed at least some Wallabies were aware of the urgency of the situation and that Raynal was about to hand down a sanction.

“I think Nard [Foley] said it was a couple of days ago, that personnel change on the field [added to the confusion],” Foketi said. “I guess as a backs’ perspective we were out there and we kind of had the same people on the field and we kind of just felt like we had an opportunity to win the game when we kick the ball out.

“So that was what we were thinking and we were so far away from the ref and the crowd was going crazy [we] couldn’t hear anything. And obviously Nard was looking at the forward pack huddled up and I think they were just trying to get their call ready for when we got the penalty and what we were gonna do in that last minute, so I don’t think everyone was on different pages.

“I just think that personnel changes and Nard was trying to figure out who was on the field and what calls was going on before we did our next move and that was to kick the ball out.”

Despite the result, Foketi, who impressed in just his second Test start at No. 12, said he enjoyed every minute of his first Bledisloe Test and would love another crack at New Zealand this weekend.

“It was awesome to be out there and like Al said to show the character within the lads and to come back from a few points down, and to give ourselves an opportunity to win the game in those last couple of minutes is something you can’t really describe when you’re out there — it was awesome,” he said.

“The emotion and the videos that have come out with me … I thought we gave ourselves an opportunity to win that and once that whistle was blown it kind of game them a sniff back to take that victory. So the last couple of minutes was crazy and I loved every minute.

“You look at the game and all the boys and everyone in the environment is disappointed in the result and we’ve just got to harness that and take that to New Zealand.

“Every opportunity to put on the gold jerseys is unbelievable. And if I get the opportunity to do that this weekend, I want to pay back the belief and the trust in the group for allowing me to day that.

“You’ve got great centres at the moment in this team and unfortunately a couple of them are injured so I just want to continue what they’ve been doing throughout the year.”

With Noah Lolesio fit again, Rennie has a big decision to make at No. 10 with the coach having last week indicated the Wallabies were keen to give the young fly-half some continuity at fly-half.

But that was before Foley returned from his three-year Test exile with a bang, even if his game ended such disappointing fashion.

“They call him the Iceman and he’s always controlled and he’s always calm and it gives you a lot of confidence,” Foketi said of Foley. “He asks what you want from him, and vice-versa. All week we trained together and we were just getting, combinations.

“When I moved to the Tahs in 2018, we played together a fair bit. He’s just calm and collected all the time and if there’s something that ever went wrong, or you did something (wrong), he’d never get up you. He’d pull you up off the ground and tell you your next job, so it was great to have him inside me.

“You could tell he was down and he was disappointed in the result. But there was no need for him to apologise to us. We all thought he had a great game and he was one of the main reasons why we had an opportunity to compete for the win. We back Nardy 100 percent, we back everyone in here so we don’t feel like he needs to apologise.”