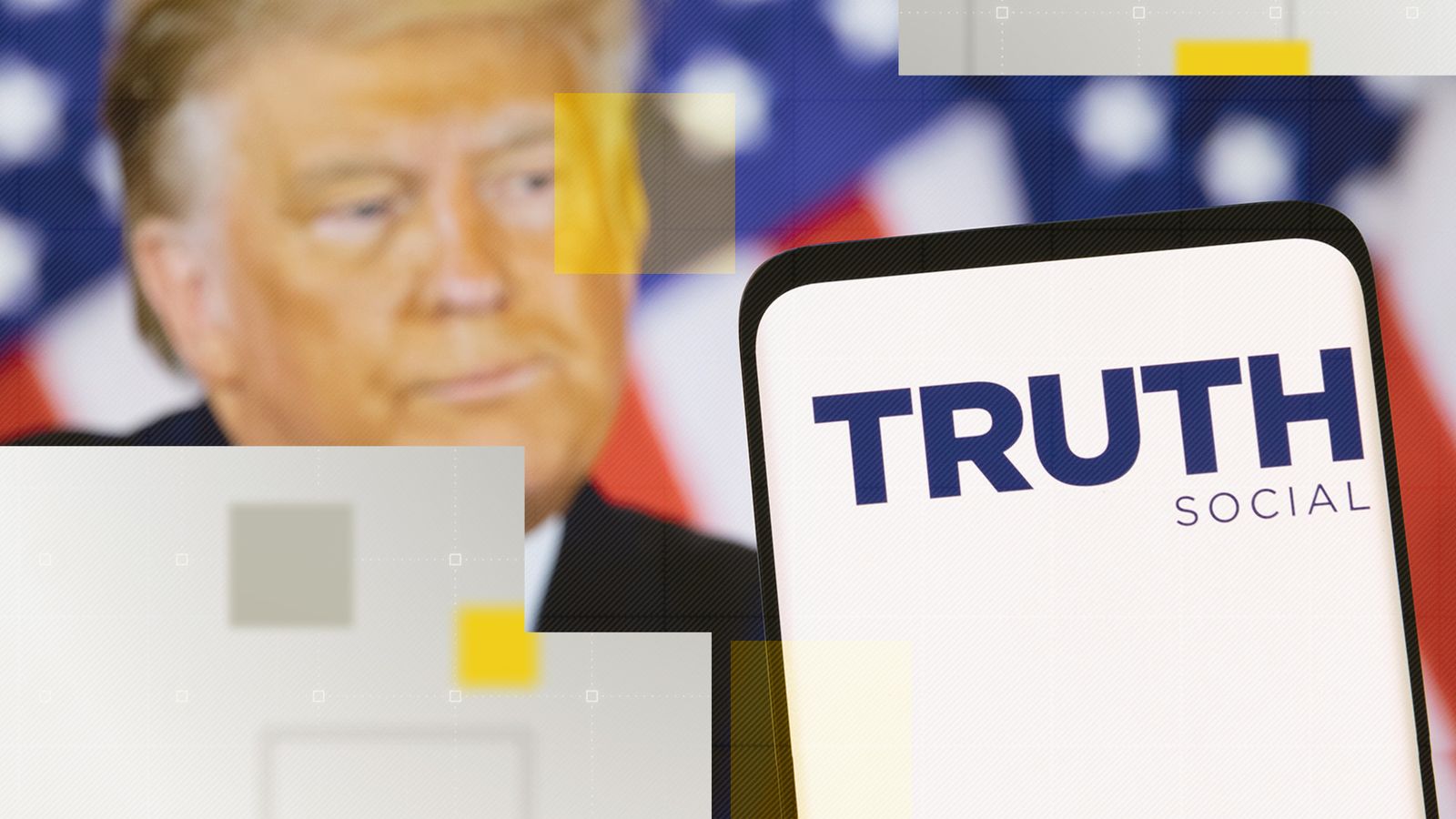 The app rose 66 places in the Apple App store from number 76 to 15 on 9 August, the day after agents searched his home. They were looking for boxes of classified information taken there after his time in office came to an end.

Many users have been posting angry messages about the FBI and one is believed to have carried out an attack on a Bureau office.

Mr Trump has used Truth Social as the main place to share his thoughts about the raid, including the post below.

The former president began Truth Social after he was suspended from Twitter for his comments during the Capitol riots when his supporters stormed Congress on 6 January 2021.

The platform went live on the Apple App store on 21 February this year but many people were on a waiting list and were unable to sign up until late April.

According to data collated by Similarweb, a digital intelligence platform, and shared with Sky News, both the Truth Social app and website have seen an increase in popularity since the raid.

The app briefly ranked #1 when it launched and after the waiting list of users cleared.

Truth Social was at its lowest ranking – #76 – the day of the raid. It leapt to #15 the day after and enjoyed a stint of renewed popularity as Mr Trump continued to post a series of messages on the platform.

We can see a similar trend with the number of times the app has been downloaded, with highs of between 80-90,000 downloads at the launch and after the waiting list cleared.

Downloads rose from 1,386 to 6,545 the day after the raid. These numbers are small compared to previous download figures.

The number of views for the web version of Truth Social began to spike on the day of the raid.

Also in the last ten days, anti-FBI phrases such as #FBIcorruption, #Truth and #DefundTheFBI have been trending on the platform, which uses many of the same features as Twitter.

Many users are highly critical of anyone they consider as acting against Donald Trump, including Liz Cheney, a Republican Congresswoman who voted to impeach him and is helping to investigate the Capitol riot.

But in recent days most of the anger remains focussed on the FBI.

Posts like these are not unique to Truth Social and are common among Trump supporters on other free speech platforms, such as Gab, Parler and GETTR, as well as encrypted messaging app Telegram.

In some rare instances, people posting threats have gone on to carry out attempted and successful attacks in the real world.

At least one example of this appears to have happened already on Truth Social, despite the platform being online for only six months.

Three days after the raid on Mr Trump’s estate, Ricky Shiffer, 42, was killed by officers while he was attempting to break into the FBI’s Cincinnati office.

Shiffer, who was armed with an AR-15 and a nail gun, is believed to have posted messages on Truth Social trying to encourage people to attack and calling for a civil war.

US media reports that an account with his name posted on Truth Social shortly after news of the FBI raid broke.

The user wrote: “I hope a call to arms comes from someone better qualified, but if not, this is your call to arms from me.”

He later added: “Evil already won, now we need to fight a civil war to take back the country.”

Shiffer also appears to have posted during the attack, with the account commenting: “Well, I thought I had a way through bullet proof glass, and I didn’t.

“If you don’t hear from me, it is true I tried attacking the F.B.I., and it’ll mean either I was taken off the internet, the F.B.I. got me, or they sent the regular cops while.”

The message stops after the word “while”.

His account appears to have been removed from the platform.

Mr Trump’s social media app and website is advertised as a home for free speech.

This compares to Twitter where users are warned “you may be exposed to Content that might be offensive, harmful, inaccurate or otherwise inappropriate” and Facebook blocks people from sharing content that is “unlawful, misleading, discriminatory or fraudulent” or “infringes or violates someone else’s rights”.

A report published this month by Public Citizen, an American consumer advocacy group, found content around abortions and the Capitol riots were sometimes blocked, with early users reporting bans after selecting usernames that were critical or made a joke at the expense of Mr Trump.

The Data and Forensics team is a multi-skilled unit dedicated to providing transparent journalism from Sky News. We gather, analyse and visualise data to tell data-driven stories. We combine traditional reporting skills with advanced analysis of satellite images, social media and other open source information. Through multimedia storytelling we aim to better explain the world while also showing how our journalism is done.