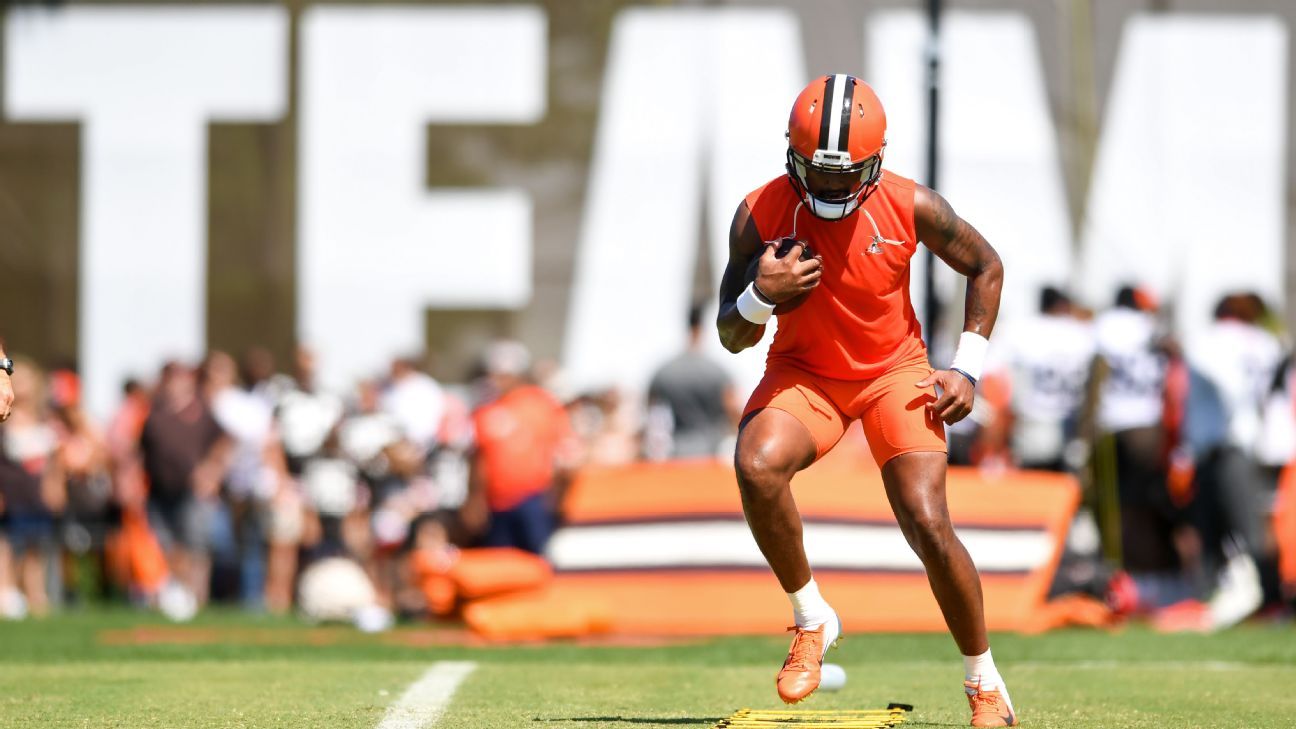 Monday’s news of a six-game suspension for Cleveland Browns quarterback Deshaun Watson has, predictably, triggered an intense reaction. This is fair and understandable, because the allegations of sexual misconduct against Watson are disturbing and deal with the issue of how the NFL polices players when it comes to behavior toward women. The history of the league includes enough mishandling of that to justify cynicism, and a lot of the reaction on Monday seemed to root itself in that cynicism. Many expected to be disappointed by the outcome, and to a large extent, they were.

Arbitration decisions aren’t designed to make everybody happy. The decisions are supposed to be based on the evidence presented and precedent in place. As you read through the 16-page report from retired federal judge Sue L. Robinson, it’s clear she tried to maintain that balance.

How did Robinson explain her decision, and how did she land on six games? And what did Robinson stipulate must happen for Watson’s future massage therapy sessions? Here are 12 key takeaways from the report.

Fundamentally, the NFL won its case against Watson

That he was found to have violated the policy at all is a critical point, because the collective bargaining agreement (CBA) states that the decision of the jointly appointed discipline officer (in this case Robinson), as to whether a violation of the personal conduct policy occurred, is binding. Meaning, if she had found no violation occurred (and thus no discipline was warranted), the league would not have had the right to appeal.

The league does have the right to appeal the determination of discipline, with commissioner Roger Goodell or his designee serving as appeals officer. According to the CBA, any appeal, either from the NFL Players Association or the league, “shall be in writing within three business days of the Disciplinary Officer’s decision, and any response to the appeal shall be filed in writing within two business days thereafter. The appeal shall be limited to arguments why, based on the evidentiary record below, the amount of discipline, if any, should be modified.”

If you’re asking yourself, “What’s the point of neutral arbitration when the commissioner still gets final say on discipline?” the answer is, under the new procedure, the league has to prove its case. It must, the CBA states, rely on “credible evidence” in front of an arbitrator, who in this case is a retired federal judge.

The NFLPA considers this a significant advance from when Goodell would simply hear the findings of his own investigators and rule on discipline without having to make those findings public.

On Page 3 of her report, Robinson — who writes that her decision is “limited by the record presented to me” — makes clear the case presented to her was not about 24 different women but four. The NFL interviewed 12 of the 24 women who were suing Watson for damages in civil court and “relied for its conclusions on the testimony of 4 therapists, as well as interviews of some 37 other third parties.”

The NFL’s investigators do not have subpoena power and thus cannot compel all 24 of the women to talk to them. They interviewed 12, and of those 12, they decided four would form the basis of their argument Watson violated the personal conduct policy. It’s unclear why they used only four, but that’s what they apparently decided was the best way to make their case.

The details of the behavior Robinson found the league to have proved are disturbing — from the way Watson solicited the massages to the unusually small size of the towel he insisted on using to cover himself during them to the intent and manner of contact he made with the therapists. Robinson found the four women in question convincing based on circumstantial evidence (including the fact they said they would have refused to work with him again after the alleged incidents) and found Watson’s blanket denial of all wrongdoing difficult to accept in light of what she called the “credible testimony of the investigators.”

No one who reads this report can come away thinking Robinson found Watson innocent of wrongdoing. Robinson concludes Watson “had a sexual purpose — not just a therapeutic purpose — in making these arrangements with these particular therapists.” Based on what she found to be the league’s definition of sexual assault, Robinson found Watson guilty of violating the personal conduct policy by engaging in sexual assault.

In the portion of the report that decides whether Watson engaged in conduct detrimental to the league, Robinson cites “Tom Brady‘s deflation of the game balls used in the AFC Championship Game in January 2015 and the 2021 New Orleans Saints’ ‘Pay-for Performance’” scheme as past cases in which the league invoked its “detriment to the league” clause: “Although the above examples were focused on the game of football itself, it clearly is within the purview of the NFL to expand the scope of its supervision to a player’s private life if he invokes his status as a player while engaging in prohibited conduct.”

Because Watson identified himself as an NFL player when reaching out to the therapists in question, Robinson found credible the NFL’s evidence that his actions were detrimental to the league.

If the NFL had its way, Watson would be suspended for the entire season

Having found Watson guilty of violating the league’s personal conduct policy, Robinson moves on to the question of whether the league’s proposed discipline was justified. The league proposed suspending Watson for the entire 2022 season and postseason and that he not be permitted to return until he satisfied certain conditions for reinstatement. Robinson writes on Page 11 she is tasked with reviewing that proposal “for consistency of treatment, uniformity of standards for parties similarly situated, and patent unfairness or selectivity.”

To be clear: If you’re asking why the NFL imposed only a six-game suspension, the answer is, it didn’t. The NFL, which contended in the hearing Watson’s conduct was unprecedented and therefore warranted an unprecedented suspension, wanted him suspended for a year.

In the final pages of her report, Robinson explains why she believed that was unjust: “Although I have found Mr. Watson to have violated the Policy, I have done so using the NFL’s post-hoc definitions of the prohibited conduct at issue. Defining prohibited conduct plays a critical role in the rule of law, enabling people to predict the consequences of their behavior.”

In citing the 2014 case of former Baltimore Ravens running back Ray Rice, Robinson notes the NFLPA’s characterization of what happened — specifically that Goodell suspended Rice for two games (as was the standard for Rice’s offense at the time) and only after public outcry revised its personal conduct policy to establish a six-game suspension as standard for first-time violent offenders.

She states that this policy change, even though it was a reaction to public outrage, at least “gave fair notice to its players and to the public of the probable consequences of certain violent conduct.”

The word ‘violent’ plays a key role in the report

The post-Rice personal conduct policy specifies the six-game suspension “for Policy violations including (1) criminal assault or battery (felony); (2) domestic violence, dating violence, child abuse and other forms of family violence; or (3) sexual assault involving physical force or committed against someone incapable of giving consent.” These are very specific types of violations, and Robinson states on Page 13, “It is undisputed that Mr. Watson’s conduct does not fall into the category of violent conduct that would require the minimum 6-game suspension.”

She also states prior cases involving nonviolent sexual assault had not led to six-game suspensions but rather no more than a three-game suspension. (Jameis Winston, then the Tampa Bay Buccaneers‘ starting quarterback, was suspended for the first three games of the 2018 season for violating the NFL’s personal conduct policy.) It’s important to note Robinson was not starting from the six-game baseline in the personal conduct policy because she defined Watson’s behavior as nonviolent and stated it did not meet the policy’s requirements for a six-game suspension.

Robinson strove for consistency where the NFL argued there was none

There’s an extremely interesting passage on Page 13. Robinson states the NFL argued “consistency is not possible, because there are no similarly situated players.” But Robinson looks at that differently and writes, “By ignoring past decisions because none involve ‘similar’ conduct, the NFL is not just equating violent conduct with non-violent conduct, but has elevated the importance of the latter without any substantial evidence to support its position. While it may be entirely appropriate to more severely discipline players for non-violent sexual conduct, I do not believe it is appropriate to do so without notice of the extraordinary change this position portends for the NFL and its players.”

Basically, Robinson is saying something akin to, You want to argue that this behavior deserves a more severe penalty, fine. Maybe you’re right. But that’s not in your policy, and you can’t just make policy to support one specific case as it’s going on. If the league wants to do what it did post-Rice and adjust its policy to account for the type of behavior Watson is herein found guilty of, it should do that — then everyone would know.

Interesting argument, for sure, but it answers a lot of the questions about the length of the suspension vis-à-vis some others in the past. She goes on to write, “It is inherently unfair to identify conduct as prohibited only after the conduct has been committed, just as it is inherently unjust to change the penalties for such conduct after the fact.”

The six-game duration of the suspension was not random

Remember, Robinson first decided she was not starting from a six-game baseline but from one of three games or fewer, based on precedent set by other nonviolent sexual assault cases. As “aggravating factors” (that is, reasons to increase the suspension), she cites Watson’s “lack of expressed remorse and his tardy notice to the NFL of the first-filed lawsuit.” As “mitigating factors” (that is, reasons to go easier on him), she cites “he is a first-time offender and had an excellent reputation in his community prior to these events. He cooperated and has paid restitution.”

Very interestingly, she also notes the league could have placed Watson on the commissioner’s exempt list last year and chose not to, which she appears to think means the league didn’t consider his behavior worthy of such punishment until it saw the public reaction to it. She makes that clear in her conclusion when she writes, “The NFL may be a ‘forward-facing’ organization, but it is not necessarily a forward-looking one. Just as the NFL responded to violent conduct after a public outcry, so it seems the NFL is responding to yet another public outcry about Mr. Watson’s conduct.”

Ryan Clark breaks down Deshaun Watson’s six-game suspension and how it stacks up to others in the NFL.

A big part of the NFLPA’s argument during the hearing (and likely a key part of its reaction if Goodell overrules Robinson and imposes harsher discipline) is the notion the league has not punished team owners for similar offenses. In Footnote 51 on Page 15, Robinson notes that argument while writing the personal conduct policy is equally applicable to team owners and management. Basically, it seems as if the NFLPA’s argument that she should consider the comparatively lighter discipline given to team owners as part of the precedent carried some weight.

It’s important to note Robinson states that Watson, as a condition of his reinstatement into the league after his six-game suspension is complete, must “limit his massage therapy to Club-directed sessions and Club-approved massage therapists for the duration of his career.” This means if he is caught going outside of his team’s purview for massages again, the league would have the right to reimpose the suspension.