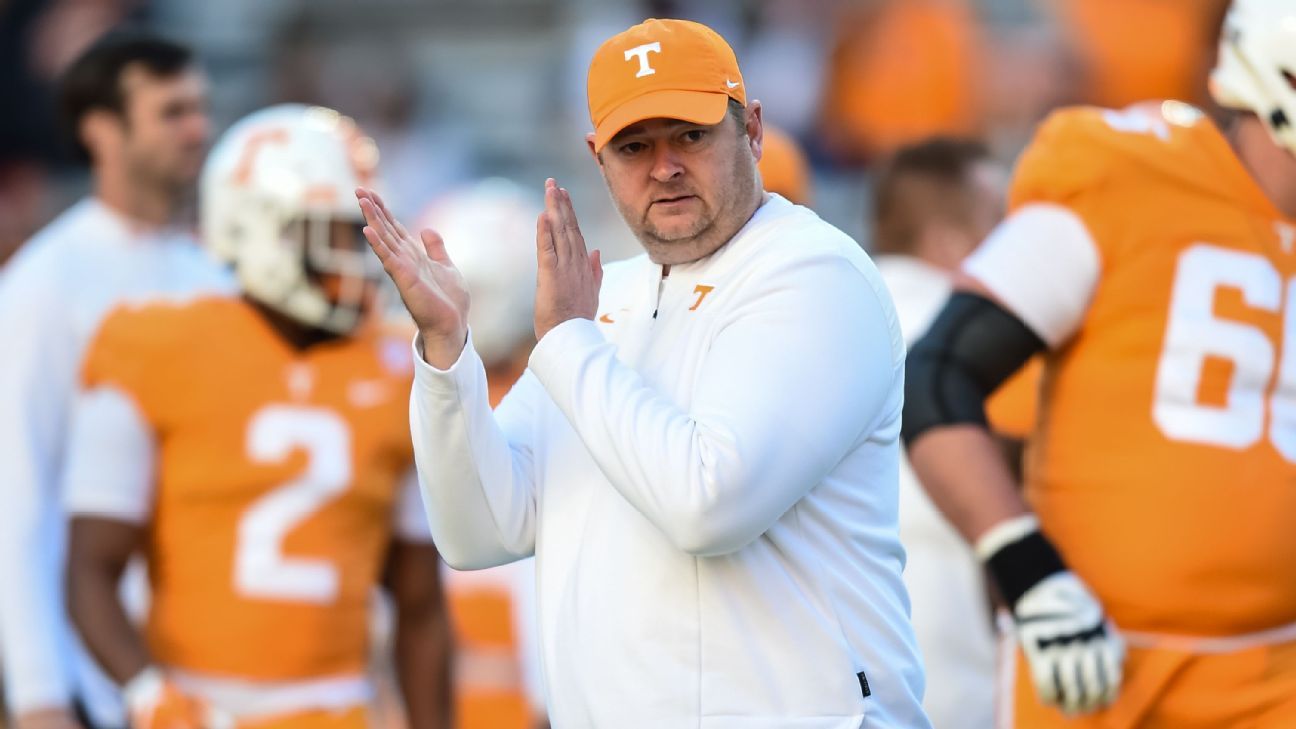 KNOXVILLE, Tenn. — Josh Heupel’s first year at Tennessee produced a 7-6 record against a rugged schedule that featured five of the top 22 teams in the College Football Playoff committee’s final rankings — just the second winning season in the past five years for the Volunteers — and came amid the shadow of an NCAA investigation stemming from recruiting issues under former coach Jeremy Pruitt that remains open.

Heupel, who came to Knoxville after three years as head coach at UCF, shared the Football Writers Association of America’s Steve Spurrier First-Year Coach Award last season with South Carolina‘s Shane Beamer. Along the way, Tennessee broke a number of school records offensively and reignited a fan base that had been desperately hanging on for much of the past decade.

Heupel knows that even more will be expected in Year 2 on Rocky Top. He expects more as well, which is why his office and the recruiting road have become second homes. It’s also why he’s just now taking his first real vacation with his family since being named the Vols’ coach on Jan. 27, 2021.

“It was overdue, especially for my family,” Heupel said. “We’d been to the Smoky Mountains for 48 hours or so, but this time we’re going to get away.”

Before getting out of town, Heupel sat down with ESPN to discuss a variety of topics, including the challenges of restoring the Vols to national relevance, what he learned in Year 1, what Hendon Hooker‘s return at quarterback means to the Tennessee offense and the importance of maintaining momentum on the recruiting trail.

Not a lot of people in the SEC knew what to expect from you or the team last season. But now they do. How equipped is this team to handle the different expectations this season?

Heupel: I think one of the great things about us a year ago, and a big part of the reason players bought in, is that we never put a ceiling on what we could or couldn’t do. There are no excuses, last year or this year. We’re at Tennessee. The guys that came here to play and the guys that came here to coach came to win and came to win championships.

Our football team is one that expects to win. They do that because of the way that they’ve worked up until this point. There’s still a lot of work left to be done. But from our support staff to our players to our coaches, we’re confident that we’ve done what it takes to take another step. Now, you’ve got to go out and earn it every Saturday, but we’re excited to go do that.

Former Tennessee athletic director Doug Dickey used to say that the coach at Tennessee will always be measured by how he fares against Alabama, Florida and Georgia. Going back to the start of the 2008 season (coach Phillip Fulmer’s final season), Tennessee is just 4-38 against those three rivals. How close or how much closer do you think you are to beating those teams, and what’s it going to take to close that gap?

Heupel: We’re in a race to get there, to become our best as fast as we can. Inherently, those three programs are big, big measuring sticks for us. But every game is. A year ago, our margins for error were really, really small. We’re going to continue to recruit, continue to develop and increase those margins, and find a way to come out on the right side of it. We determine where we’re at in the fall by how we go about our business every single day. I believe in what we’re doing. At the end of the day, this program is going to be built on chasing championships and winning those games, and I believe we’ll get there soon.

There seems to be recruiting momentum around your program. (Tennessee is 13th nationally and third in the SEC in ESPN’s latest rankings for the 2023 signing class). How confident are you that you’re beating the teams on the recruiting trail that you’ve got to beat on the field?

Heupel: You gotta win your fair share of those battles, and we’re getting the right kids on campus. As we go through the rest of this recruiting cycle, we’re going to have to close and win some of those battles too. But there’s a lot of positivity and a lot of momentum in what we’re doing, the experiences that our guys are having and our recruits are having when they’re on campus. This university, this city, the passion of our fan base … is second to none. We’re fighting the good fights, man. We’ve got to win some of these here down the stretch, but I think we’re in a good position.

Collectives linked to Tennessee’s athletic department reportedly have been especially aggressive in the world of name, image and likeness. What’s your stance on NIL and players’ ability to earn money?

Heupel: For me, it’s real simple. I just go back to my playing days. I look at what I was doing for the university I played for (Heupel was the Heisman Trophy runner-up at Oklahoma in 2000) and the logo that I played for, and at the same time, I feel like I had created a brand too, and would have liked to have been afforded the opportunity to take advantage of those things. I think that’s why today’s student-athletes, like freshmen coming into campus, the positive of it is kids are very aware of what they’re doing and what’s out on social media and that there’s a maturity they have to operate with.

But this is the game now. It is not going away, and we better embrace it. And from my playing days, I understand the positive side of it.

How widespread has NIL become in terms of being a recruiting inducement for, not only high school players but players in the transfer portal, and is that what it was intended to be?

Heupel: How things are intended and how they functionally operate … that’s the space we’re in, trying to navigate it. There’s always going to be unintended consequences. Recruiting is operated differently at different times. This is the landscape that some schools are operating in. It’s a paradigm shift, right? Everybody’s trying to figure out how you navigate it and what it looks like as you move forward. It’s like anytime there’s a new landscape in business. It’s different than it was a year ago at this time. I mean, drastically different.

Compared with some of the other schools you’re recruiting against, how well-positioned is Tennessee to capitalize in the world of NIL?

Heupel: Well, I think this is a great, great collegiate city, one of the greatest college towns and college cities, and that’s how I describe it. Everything bleeds orange and white, and there are so many opportunities, a great place, great businesses with worldwide national headquarters being located here. Our fan base is as rabid as any, top five on any social media platform that you look at. You put all those factors together, our stadium seating over 100,000, and there are a lot of unique opportunities here.

Heupel: I think we have a chance to be more efficient on offense just in the normal function of snap-to-whistle and execution too. But what’s different is Hendon, his comfort inside our building, his being a year into our system — and he’s the guy. Everybody knows he’s the guy, and that’s really the first time it’s really been that way for him during his career. It’s helped him gain confidence and helped him use his voice in a different way than he did a year ago. He’s in command of his position group. He’s in command of the offense. He’s in command of his football team. His presence is felt in a completely different way than it was a year ago.

From your perspective as a former quarterback, what about Hooker stands out to you?

Heupel: His competitiveness and the physical way that his competitiveness comes out on game day. All quarterbacks have to be competitive. But for him, man, it’s the way he plays the game. People know he’s going to lay everything on the line on every play, and they know how he prepares. Every day, you’re going to see him in our building early and leaving late, always trying to find a way to get better. I think that extra work and the positive communication that he has with his teammates, the way that he leads, has transcended our team room and our locker room. You’re starting to see those attributes in more guys and more positions too.

What did you and your team learn from the close losses last season, particularly the home losses to Pittsburgh and Ole Miss?

Heupel: I think last year we probably started off as a team that hoped to win and grew into a team that believed that we could win. I think they gained confidence in some of those close losses. I think one of the unique things for our football team is in some of those setbacks we were able to pinpoint specific things that we could control. We got better throughout the course of the season, and we’re going to need to do that again this year. I think we’ll be a more confident football team from the outset because we’re doing all of the right things to put ourselves in a position to win.

Where are you most encouraged and most concerned about your defense (which ranked 122nd nationally in passing defense and 101st in third-down defense last season)?

Heupel: Creating tackles for loss and creating negative plays, we did a good job of that. We weren’t good on third down, particularly third-and-long. We’ve got to be better in that, and that starts with getting a pass rush. I feel like the guys that have come back have made some strides. It was a big emphasis in spring ball. We’ve got to be better knowing our pressure packages of keeping quarterbacks inside the pocket and not letting them out. We got hurt with that multiple times last season. We’ve added some guys that give us a chance to be a little bit different off the edges.

Heupel: You can feel that positive energy, and it surrounds our program, the foundation that we built last year across this state. I think people are proud of how we played a year ago. We played really hard, and that’s the first step. We all want to play better and win more ballgames, and I think we’ve set ourselves up to have a great season. This is a great time to be at Tennessee, the leadership that we have on campus and the way people have rallied around what we’re all doing here. Man, I can’t wait, and we can’t be more excited about the fall.

The price of a pint is going through the roof. Here’s why UK beer costs are far outpacing inflation
Girl dies at water park near Windsor ‘after getting into difficulty’
Go inside the place this farmer says even the Ukrainian military fears
SolarEdge is willing to sacrifice margins today to capture huge demand growth in Europe, CFO says
China begins military exercises around Taiwan hours after two suspected drones fly over island’s territory