Conservative MP Sir David Amess has died after being stabbed at a surgery in his constituency, police say.

Sir David, who represented Southend West in Essex, was attacked on Friday afternoon at Belfairs Methodist Church in Leigh-on-Sea. 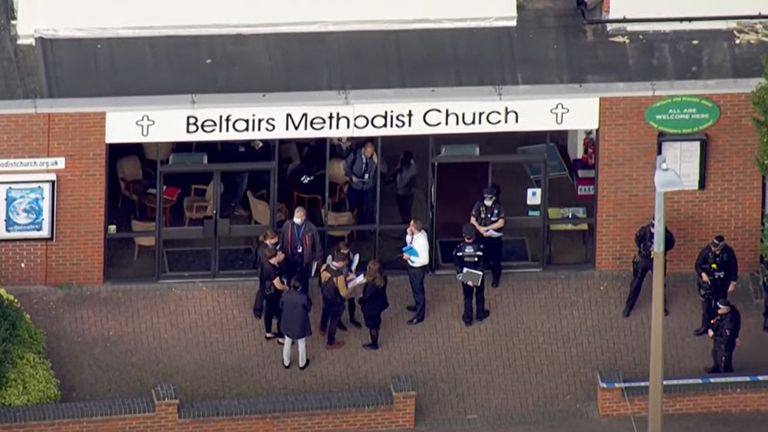 Sky News understands a man walked into his constituency surgery and stabbed him multiple times.

The 69-year-old father-of-five had been MP for Southend West since 1997 and first entered parliament in 1983.

“A man has been arrested on suspicion murder after a man was stabbed in Leigh-on-Sea,” Essex Police said in a statement.

“We were called to an address in Eastwood Road North shortly after 12.05pm today (Friday 15 October).

“We attended and found a man injured. He was treated by emergency services but, sadly, died at the scene.

“A 25 year-old man was quickly arrested after officers arrived at the scene on suspicion of murder and a knife was recovered. He is currently in custody.

“We are not looking for anyone else in connection with this incident.” Tributes have been paid to the long-serving MP.

Health Secretary Sajid Javid said Sir David was a “great man, a great friend, and a great MP killed while fulfilling his democratic role”,” while Foreign Secretary Liz Truss said he was “a lovely, lovely man and a superb parliamentarian”.

Grant Shapps, the transport secretary, described him as a “dedicated, thoughtful man and a true parliamentarian, who lost his life while serving the constituents who he worked relentlessly for throughout his career”.

“He was a good and gentle man, he showed charity and compassion to all, his every word and act were marked by kindness. My heart goes out to his family.”

Chancellor Rishi Sunak wrote on Twitter: “The worst aspect of violence is its inhumanity. It steals joy from the world and can take from us that which we love the most.

“Today it took a father, a husband, and a respected colleague. All my thoughts and prayers are with Sir David’s loved ones.”

Devastated to learn of Sir David Amess’ murder. A great man, a great friend, and a great MP killed while fulfilling his democratic role.

My heart goes out to Julia, his family, and all who loved him.

Let us remember him and what he did with his life.

Lord Pickles, a former Conservative minister, told Sky News his Tory colleague was a “great family man, somebody who was very open and very good company as a fellow member of the House of Commons”.

“He was enormously good company. He cared passionately about a number of issues, in particular animal welfare, and he was somebody who really knew how the system operated,” he said.

“Some people choose a path of being a minister, but David knew how to operate on the floor of the House of Commons to get things done.”

“I could write reams on how Sir David was one of the kindest, most compassionate, well liked colleagues in Parliament. But I can’t. I feel sick. I am lost,” she wrote on Twitter.

“Rest in Peace. A little light went out in parliament today. We will miss you.”

My thoughts and love are with David’s family. They are all that matter now. This brings everything back. The pain, the loss, but also how much love the public gave us following the loss of Jo. I hope we can do the same for David now. pic.twitter.com/hwRN0PODPK

“He was hugely kind and good. An enormous animal lover and a true gent. This is so completely unjust. Thoughts are with his wife and their children.”

Brendan Cox, widower of the late Labour MP Jo Cox, who was murdered in an attack in 2016, said Sir David’s killing “brings everything back”.

The pain, the loss, but also how much love the public gave us following the loss of Jo. I hope we can do the same for David now,” he said.

Nicola Sturgeon, Scotland’s first minister said: “Elected representatives from across the political spectrum will be united in sadness and shock today.

“In a democracy, politicians must be accessible and open to scrutiny, but no-one deserves to have their life taken while working for and representing their constituents.”

Mark Drakeford, first minister of Wales, described it as a “truly despicable and horrifying act”.

“My thoughts are with David’s wife and children, the wider family, friends and David’s community,” he wrote on Twitter.

“A truly terrible day for British politics but most importantly of all our prayers are with all the people who loved David.”

“Sir David was a thoroughly decent man, who was well liked across parties and the House of Commons,” Mr Blackford said.

“All of us are appalled at this barbaric attack, which was as senseless as it was cowardly. He was murdered while simply doing his job.”

75 more Omicron COVID cases found in England – as UKHSA releases risk assessment
This ‘Super Jelly’ Material Created With 80 Percent Water Can Withstand an Elephant’s Weight
U.S. natural gas sinks, on track for worst month in three years
Tesla’s Giga casting strategy to be adopted by half a dozen other automakers
Student breaks down after learning classmate died in shooting