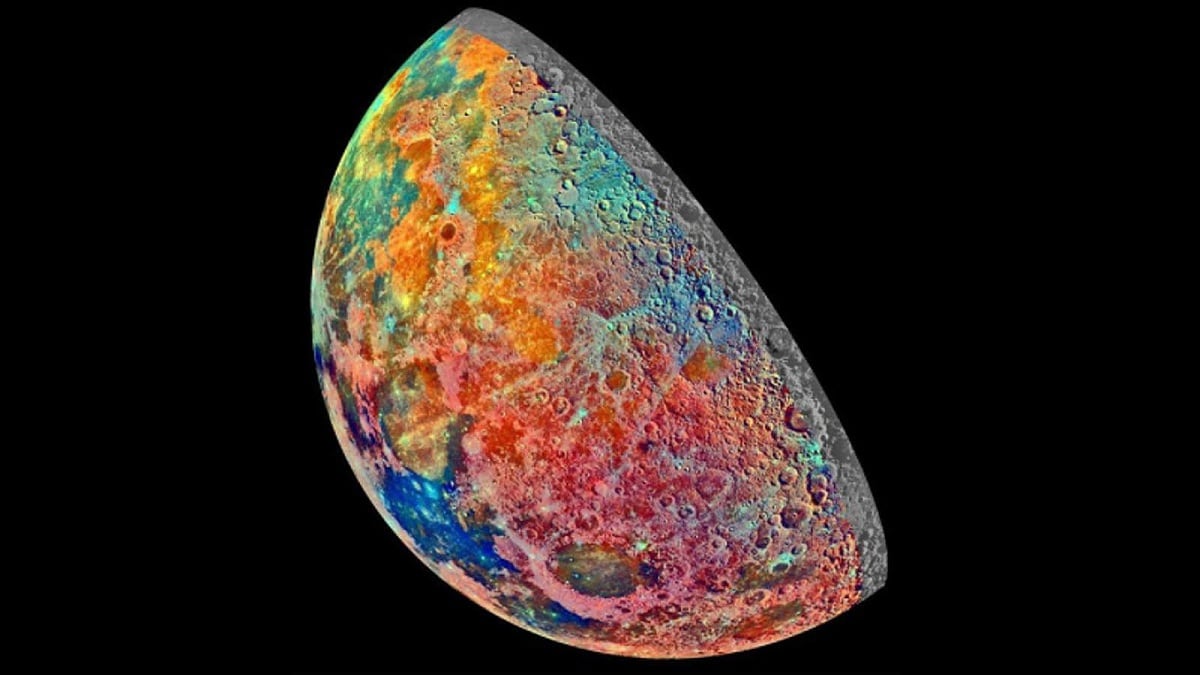 We adore NASA for stunning us with marvellous pictures from various nooks and crannies of the Universe. Be it amazing landscapes of Mars or dreamy nebula clouds, we won’t miss out on any of them if we keep a track of NASA’s social media handles. The latest feast for our eyes is this “false-colour mosaic” photo constructed from a series of 53 images. Any guesses which planet it is? Nope, it’s not a planet at all. The photo on Instagram is of our Moon.

“Our Galileo spacecraft took this false-colour mosaic, constructed from a series of 53 images, as the spacecraft zoomed over the northern regions of our Moon on December 7, 1992. The spacecraft was on its way to Jupiter,” says NASA.

The colour splatters all over the Moon represent different features of those areas. The bright pink areas spreading over the region represent the highlands. They surround the oval-shaped ”crisium impact basin” that we spot at the bottom. Ancient lava activities are shown by blue-to-orange shades.

The dark blue stretch at the bottom is Mare Tranquillitatis, where Apollo 11 landed. It represents an area richer in titanium than the green and orange areas elsewhere. The light blue colour represents mineral-rich soil. These are associated with recent meteorite or asteroid impacts. The brightest blue light sparks are from the youngest craters.

The Galileo spacecraft orbited Jupiter from the year 1995 to 2003 and fed our scientists with many discoveries. The probe, named after Italian astronomer Galileo Galilee who discovered the four largest moons of Jupiter, indicated that the planet’s icy moon Europa could nestle an ocean under its surface. NASA’s caption mentioned Juno, Galileo’s successor mission which is currently exploring the planet “to help us understand the origins of our solar system.”

Instagram users are loving this colourful image of the Moon. The post has received over 20,00,000 likes and over 7,000 comments. Many have left red heart and heart-eye emojis.

“It’s a moon pie,” one user wrote in wonder. “I’m screaming. This is amazing,” wrote another who couldn’t hold their excitement.

A user commented to remind us of the time that has passed since the photos were taken in 1992, “I was exactly 8 months (+1day) old when this picture was taken.”

We’ll all agree that never before did the Moon look more beautiful in a photo.

Can Nothing Ear 1 — the first product from OnePlus co-founder Carl Pei’s new outfit — be an AirPods killer? We discussed this and more on Orbital, the Gadgets 360 podcast. Orbital is available on Apple Podcasts, Google Podcasts, Spotify, Amazon Music and wherever you get your podcasts.
This article was originally published by Ndtv.com. Read the original article here.

VinFast combines US and Canadian business operations into VinFast North America
‘Explosions and calls in the night’: Zelenskyy recalls first moments of invasion and how close Russian forces got to him
Asteroid 2023 BU Just Passed a Few Thousand Kilometres From Earth. Here’s Why That’s Exciting
Politicians are not offering a comprehensive solution on how to fix the NHS
‘Over my dead body’: Proposals to make some NHS patients pay for care spark backlash