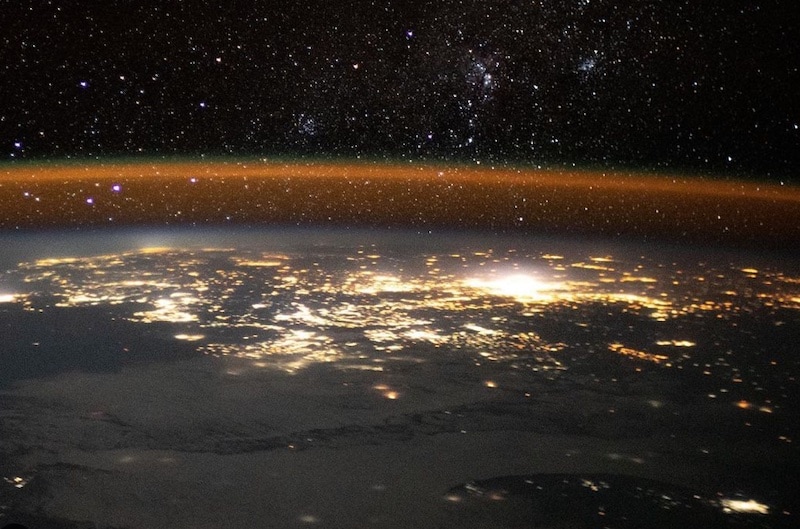 NASA has shared another stunning view of the Earth from the International Space Station (ISS) at night time. The image, glittering with stars right above the Southeast African coast, was captured by one of the ISS crew members while flying in the space station at an altitude of 423 km, the American space agency said. While the stars hung in the sky, the land was illuminated by bright light. The combination of lights creates an illusion as if tiny water droplets skitter after falling on a hot surface.

“Remember: you are made of star-stuff and nobody can take that away. So shine bright today, and enjoy this glittering image of the southeastern African coast,” NASA said.

The International Space Station orbits Earth at an average altitude of 402 km. The space station travels at a speed of 17,500 mph, meaning it orbits the Earth every 90 minutes.

The mesmerising photograph has received wide attention from Internet users.

“You made my day, NASA,” a user named Shel said.

“That’s here. That’s home. That’s us,” said another, with the username Aron Visuals.

Africa is the second-largest continent in the world. It is an isolated landmass with only a small land bridge, connecting the African Mainland with Western Asia, in the northeast.

The NASA image is of the southeastern coast, which includes Lesotho, Eswatini, Mozambique, Tanzania, Kenya and Somalia on the mainland, and Madagascar, Mauritius, Reunion, Comoros etc as island-nations.

NASA regularly shares incredible images of the Earth captured from the ISS.

The space agency had shared an image of Tokyo glowing stunningly bright “with the magic” of the Olympic Games 2020.

Surrounded by the blue Pacific Ocean, the illuminated part of the Japanese capital was clearly visible. Proper lighting is required to hold the Games, which are also played at night and outdoors.

Virginia schools boss fired after teacher shot by six-year-old despite ‘warnings’
‘New clock’ on police accountability after death of Tyre Nichols, says civil rights campaigner
Toyota is the latest car company to jump on the electric bike bandwagon
Putin threatened to kill me with a missile before Russia invaded Ukraine, says Johnson
Hunt set to declare that dire predictions about UK’s future are ‘wrong’