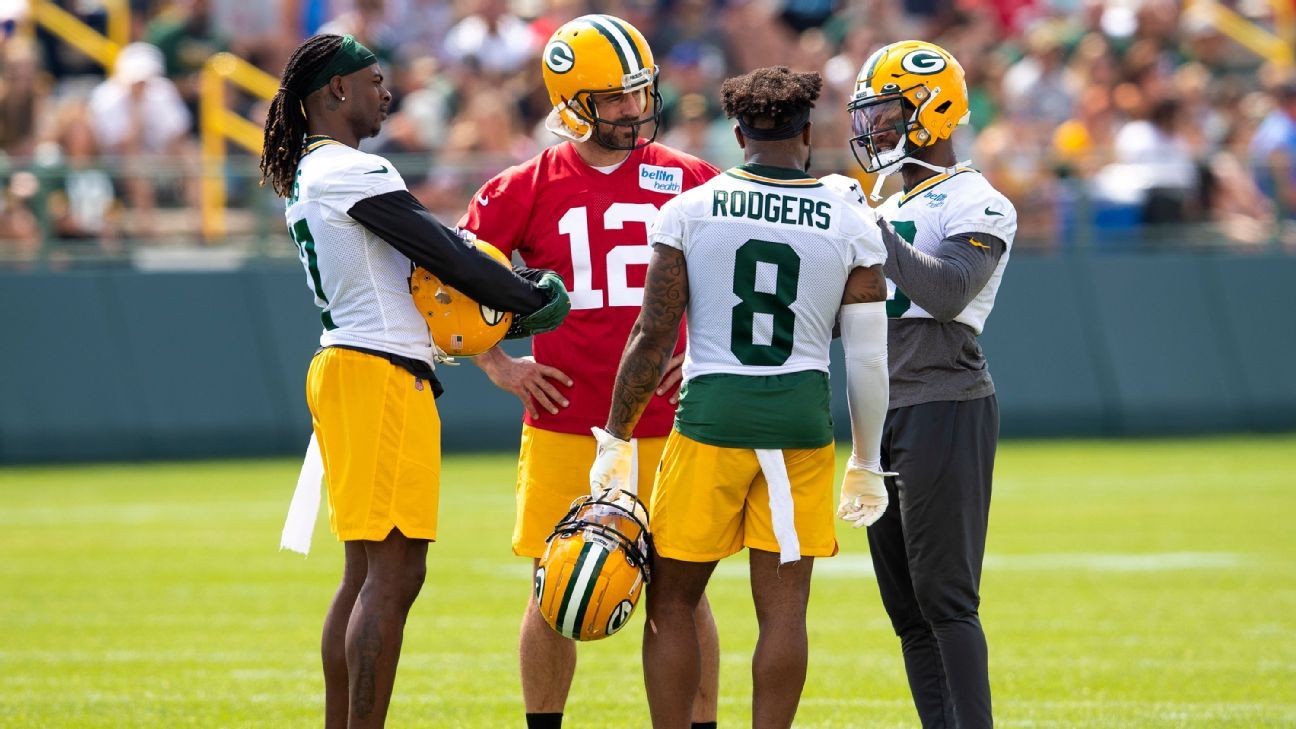 GREEN BAY, Wis. — The first week of training camp here has revealed an early test of the Green Bay Packers‘ shadow general manager, aka quarterback Aaron Rodgers. Two slot receivers — one a veteran whom Rodgers campaigned to acquire, the other a rookie drafted when Rodgers was contemplating his future — have each gotten work with the starters.

Packers fans and fantasy managers alike want to know how playing time and targets will shake out between Randall Cobb and Amari Rodgers. The Packers’ actual general manager, Brian Gutekunst, expressed confidence last week coach Matt LaFleur would find roles for both players. But make no mistake: Aaron Rodgers’ long and clear history of favoring veteran receivers should be the guiding light of this discussion.

“He’s a dear friend,” Rodgers said of Cobb, “and a guy that I still believe can really play.”

Over the years, Rodgers’ exacting expectations of receivers has reduced his reliance on rookies to levels unseen elsewhere in the NFL. Since his career as a starter began in 2008, Rodgers has never targeted a rookie receiver more than 68 times in a season (Marquez Valdes-Scantling in 2018). Every NFL team has had at least one rookie receiver targeted more frequently in a season than that, and overall there have been 101 rookies with between 69 and 144 targets in a season between 2008 and 2020. To be fair, the Packers have never used a first-round pick on a receiver when Rodgers was a starter. But 59 of those 101 rookies cited (58%) were not first-round picks.

The NFL regular season is just around the corner. Here are the biggest questions and roster projections for all 32 teams. Read more »
&#8226 Full 2021 schedule | Depth charts »
&#8226 Transactions | Injuries | More NFL »

In the time they played together, Cobb was Rodgers’ favorite receiver based on targets. He threw Cobb’s way 607 times between 2011 and 2018, 62 times more than fellow veteran Jordy Nelson. Cobb caught 71% of the passes Rodgers threw him, the highest catch percentage of any Packers receiver.

There was and remains a deep connection between the two, one Rodgers wanted to wring more production from in the twilight of their careers. Rodgers’ desire to influence Packers’ personnel moves, at least the ones that revolve around the passing game, was a big part of his offseason reluctance to return to the team. And as they rekindle their magic this summer, Amari Rodgers is undergoing the demanding process of earning his quarterback’s trust.

“[Cobb] already has the trust of 12,” he said, referring to Aaron Rodgers’ jersey number. “I’m just trying to earn the trust of 12, and every single day just learn the offense and get the gist of it so, when Sundays come, whenever we get our opportunities, we’re going to make those plays so we can win the Super Bowl.”

We’ve seen what happens when Rodgers has a short list of trusted receivers. Over the past two seasons, he has found ways to target veteran Davante Adams 277 times. The next most-frequently targeted pass-catcher has been tailback Aaron Jones (128), followed by Valdes-Scantling at 119. The 149-target difference between Adams and Jones is tied for the highest between the top two pass-catchers on any team in the NFL since the start of 2019, according to ESPN Stats & Information research. Adams’ 25.6% share of his team’s total targets is the second-highest in the NFL, behind DeAndre Hopkins (29.1% with the Houston Texans and Arizona Cardinals).

Adams is unquestionably one of the most talented receivers in football, of course, and it makes sense to target him as much as possible. But even in his rookie season, as a starter alongside Cobb and Nelson in 2014, he was targeted 68 times — 85 fewer than Nelson and 61 fewer than Cobb.

Amari Rodgers faces more obstacles than Adams did as a rookie, assuming Cobb stays healthy. (He has missed 14 games in the past three seasons due to injury.) Using both players in three-receiver sets would stretch LaFleur’s creative limits. Cobb has started 80% of his career snaps, and caught 44 of his 48 touchdown passes, from the slot. Amari Rodgers, meanwhile, ran 88% of his routes from the slot at Clemson in 2020.

In other words, neither has much experience working as an outside receiver. At least early in the season, that could lead to a focus on one-off plays such as bubble screens and backfield pitches for Amari Rodgers, as well as an emphasis on kick returns. Rodgers is an exceptional open-field runner and led the Power 5 last season with 602 yards after the catch on routes he ran from the slot.

“I knew as soon as I got drafted [that] every tiny bit of selfishness in me had to go out the window,” Amari Rodgers said. “Because I know the goal here is to win a Super Bowl and that’s my goal too. So I’m going to do everything in my power to help the team do that.”

Fortunately, the two receivers have a unique relationship that should minimize any hard feelings. Amari Rodgers is the son of former Tennessee quarterback Tee Martin, who was Cobb’s receivers coach during his final year at Kentucky in 2010. (Martin is now an assistant with the Baltimore Ravens.)

So, Cobb first met Amari Rodgers when Rodgers was 12 years old, and they have stayed in touch since. Upon his unexpected return to Green Bay, Cobb pledged to help the rookie get acclimated to the Packers’ culture. That starts with building trust with the quarterback, and the recent history in Green Bay tells us that it takes time.

Inside the ‘Wormhole,’ Relativity Space’s monster factory 3D-printing reusable rockets
Elon Musk says Twitter is ‘trending to breakeven’ after near bankruptcy
Biden says he’s willing to work with political rivals – but Republicans say he is ‘unfit’ to be president
Ammunition running out but ‘no new money’ for defence despite war in Ukraine, sources say
Zelenskyy cheered as he says ‘freedom will win’ during historic UK address