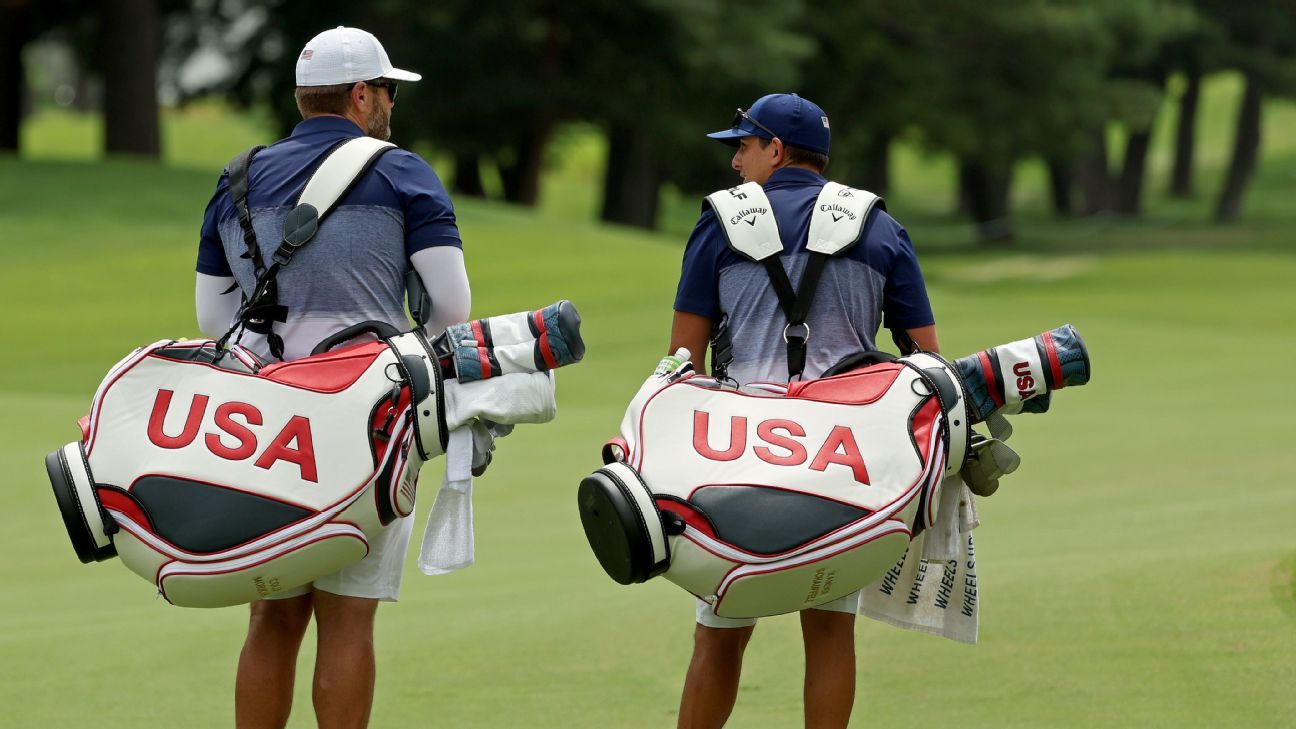 Golf is back in the Olympics for the second time after a 112-year absence, following a successful return in Brazil in 2016, when England’s Justin Rose captured the gold medal. Rose held off Sweden’s — and then-reigning Open champion — Henrik Stenson. American Matt Kuchar finished third to win the bronze.

None of the three medalists are back this time when the event begins Thursday just outside Tokyo. Masters champion Hideki Matsuyama figures to be among the biggest storylines in his home country, but there are plenty of others, including one that involves a couple of top players who will not participate — Jon Rahm and Bryson DeChambeau.

Here is a look at the tournament.

How we got here

Only 60 players qualify for the competition, based on the Official World Golf Ranking of June 21. A maximum of two players per country can participate, with up to four if all of the players are ranked among the top 15 in the world. The United States had 10 players ranked among the top 15 and is the only country to qualify the maximum of four players.

Starting Thursday, there will be 72 holes of stroke play through Sunday, with no cut.

There are 35 countries that have at least one player competing in the tournament.

Kasumigaseki Country Club is the home for both the men’s and women’s events. The club is a 36-hole facility located about 35 miles outside of Tokyo, with the East Course being used for the competition. Opened in 1929, the club has hosted several high-profile tournaments, including the 1957 World Cup, where Koichi Ono and Torakichi Nakamura of Japan defeated the heavily-favored U.S. team of Sam Snead and Jimmy Demaret. It has also been home to multiple Japan Opens, Japan men’s and women’s amateur championships and the 2010 Asia-Pacific Amateur Championship, won by Matsuyama — earning him his first invitation to the Masters the following year.

The East Course has made Golf Digest’s top 100 courses in the world and underwent a renovation in 2016 by Tom and Logan Fazio. It measures 7,466 yards and features the Japanese dual green system, meaning each hole has two greens, one used for summer play and the other in the winter.

The favorite is out

Keep up with the Summer Games in Japan on ESPN: Read more »

Spain’s Jon Rahm figured to be a strong bet to win the gold medal, given his recent form that included a victory at the U.S. Open and a T-3 at The Open. But prior to leaving for Tokyo, Rahm tested positive for COVID-19, ending his dream of representing his country in the Olympic Games.

Rahm’s withdrawal — along with that of Bryson DeChambeau, who also tested positive for COVID-19 — means a rocky start for a tournament that expected to see both players figure prominently. This is Rahm’s second COVID-19 withdrawal; he was forced out of the Memorial in June after three rounds of an event in which he led by six strokes going into the final round.

Given his positive test there, Rahm would have no longer been required to test on the PGA Tour for at least three months. The Tour actually had plans starting last week to halt its testing program.

But the Olympics required a series of tests and Rahm is out. Spain will still have two competitors, with Jorge Campillo a late add who will join Adri Arnaus.

Dustin Johnson would have qualified, but he announced in March he would be skipping the Olympics. Collin Morikawa, Justin Thomas and Xander Schauffele are top-10 in the world and will be considered among the favorites to win the event — or at least earn a medal. Patrick Reed, who is replacing DeChambeau, has fallen to 13th but was ninth when the Olympic cutoff occurred on June 21. He’s the only American to have competed at Rio in 2016, when he tied for 11th. Both Morikawa and Schauffele have Japanese family ties, which heightened their interest in competing.

What will DeChambeau do next?

He won’t be competing in the Olympics, and perhaps an eventful month that included a back-nine blow up at the U.S. Open, a caddie break-up at the Rocket Mortgage and then a dust-up with his equipment manufacturer at The Open (for which DeChambeau apologized), this will be a welcome break. DeChambeau was in need of a re-set anyway, and will get that chance.

Reed appears excited about the opportunity that was presented when DeChambeau had to withdraw and will endure quite a few hassles to make it happen. He was required to go through a prolonged testing process that won’t get him to Tokyo until Wednesday, which means he will not have time for a practice round.

Fresh off his Open victory — and second major championship — Morikawa now takes a shot at Olympic glory. He became just the eighth player to win two majors before the age of 25 as well as becoming the first to win two majors in his debut appearance in each.

As for the Olympics, Morikawa was certainly excited about the prospects when he qualified.

“It’s going to be one of the best things of my life,” he said. “To think back that I was an amateur two years ago, literally two years ago, and to be on this team and heading to Tokyo puts a smile on my face. I’m really excited.”

A lot of attention will be focused on Matsuyama, who became the first Japanese male golfer to win a major championship when he captured the Masters in April. Matsuyama, who won the 2009 Japan Junior Championship and the Asia-Pacific Amateur at the same course in 2010 (and then defended his title a year later in Singapore), has had little success since his victory at Augusta National. He tested positive for COVID-19 at the Rocket Mortgage Classic, which caused him to skip The Open. Rikuya Hoshino, ranked 76th in the world, is the other Japanese player in the field.

Justin Rose is not in Tokyo to defend his Gold from Rio, but fellow Englishmen Tommy Fleetwood and Paul Casey are determined to keep the medal for the United Kingdom. Both players have come across as more than eager for this opportunity, spurred on by the joy shown by Rose.

“What came from that was the surprise of how proud Justin was and the emotions he felt from winning,” Fleetwood said. “He spoke to me about it a lot. I just think it was really cool seeing his face light up and hearing him talk about how he felt about not only competing in Olympics but being an Olympic gold medalist. It was very, very cool seeing him and watching him talk about it.”

Fleetwood added that “you’re not just playing as an individual, you’re playing for the nation. I don’t know that we would see that as pressure. We would see that as a proud moment and something that we’re, really, really excited about. It is fantastic that we’ve had a gold medalist for our sport, and I’m sure we would just absolutely love to keep that going.”

Juvic Pagunsan is the sort of player golf’s leaders had in mind when they began pushing for inclusion in the Olympics more than 15 years ago. It wasn’t all about the top names; part of the plan was to inspire Olympic participation in countries where golf might have otherwise been underserved.

Pagunsan is 43 and from the Philippines. He has played most of his golf on the Japan Tour, where earlier this year he won his first title, the 2021 Gateway to The Open Mizuno Open. He used only 11 clubs and had to carry his own bag due to COVID-19 restrictions, which did not allow caddies. That victory got him into The Open but he elected to skip the tournament at Royal St. George’s in order to prepare for the Olympics.

Viktor Hovland and Kristian Krogh Johannessen will represent Norway at the Olympics. They have known each other for years. Johannessen has been somewhat of a mentor to Hovland, who played college golf at Oklahoma State and has won twice on the PGA Tour. They partnered at the 2013 European Boys event.

“We have a very rich Olympic tradition,” Hovland said. “Now, with golf being an Olympic sport, I think it would be great for people back home to just get into the sport.”

How important is the Olympics to Sungjae Im and Si Woo Kim? The South Koreans are both prominent players on the PGA Tour. Each decided to skip The Open in order to be better prepared for the Olympic tournament. And it’s not just the medals they covet: Earning a spot on the podium means an exemption from military service.

Both Im and Kim are subject to compulsory military duty called conscription in South Korea. Males ages 18 to 28 are required to serve at some point. Sangmoon Bae was on the International Presidents Cup team in 2015, his last professional event before his mandatory service. He came back to golf and won on what is now the Korn Ferry Tour. But it has been a struggle to regain his place. Bae barely played during his two years of service.

The way to avoid military service? Win an Olympic medal.

Gold, silver and bronze medals are the obvious prizes for Olympic glory. There is no prize money.

For those competing in the tournament, world ranking points are being offered. But it appears that the Olympic competition will have a strength of field that offers fewer than 50 world ranking points to the winner, a number that was decreased due to the loss of Rahm and DeChambeau. That would put the Olympics in line with a tournament such as the Rocket Mortgage Classic. Those points can be particularly important to those players farther down the list.

The tournament is also considered an official event on the European Tour and a victory would offer full status there. The winner of the tournament will also receive a one-year exemption into the major championships and the Players Championship, while the medalists are exempt from local or first-stage qualifying for the U.S. Open.

Liz Truss rules out future PM bid but ‘doesn’t regret’ her short time in No 10
Elon Musk cleared of deceiving investors with Tesla tweet
Harry Styles wins Grammys’ biggest prize – as Beyonce makes history
US zero-emission transit buses saw a 66% increase in 2022 – here’s why
‘I was not given a realistic chance’, says Liz Truss, as she makes comeback