After a three-hour filibuster, the Community Solar Act (SB 84) passed on April 5, 2021. The act authorized community solar projects in the state and requires that 30 percent of each community solar facility serves low-income households. The first three years of the program are capped at 200 megawatts of total generating capacity. This total does not include native community solar projects or rural electric distribution cooperatives. The bill defines “native community solar projects’ ‘ as facilities located on native land that is owned or operated by “an Indian nation, tribe, or pueblo or a tribal entity or in partnership with a third-party entity.” This addresses ILSR’s third principle: that any community solar policy must be additive, rather than detract from any existing renewable energy policy. Subscriptions can supply up to 100% of subscribers’ average annual electricity consumption.

New Mexico is the second sunniest state in the United States, with an average of 300 days per year of sunshine. This climate makes the state a prime candidate for solar power. Early estimates suggest that New Mexico’s community solar program should be up and running by Spring 2022. The Community Solar Act requires that the Public Regulation Commission finalize the rules process by April 1, 2022.

In addition to investor-owned utilities, third parties can own community solar facilities ( fulfilling the Institute for Local Self Reliance’s second principle of successful community renewable energy, flexibility). The system is regulated through renewable energy certificates. In the case of community solar facilities, these certificates are actually owned by the electric utility to which the facility is interconnected. These certificates may be traded or sold, and serve as proof of compliance with New Mexico’s renewable portfolio standard. The community solar program will help to fulfill New Mexico’s requirement that investor-owned utilities are carbon-free by 2045 and 2050, respectively. 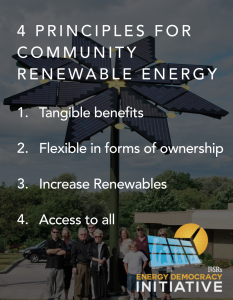 A study by the University of New Mexico’s Bureau of Business and Economic Research predicts that the community solar project will be a massive boost to New Mexico’s economy. For a small state, the numbers are staggering: 3,760 jobs over the next five years, $517 million in economic benefits, $147 million in labor income, and $2.9 million yearly in tax revenue. Community Solar also offers excellent benefits to small and medium sized landowners, like local farms, many of whom do not possess the amount of property necessary to host a full-scale solar plant. Additionally, projects can partner with local farms and offer landowners revenue for leasing space to solar gardens.

In addition to the boons to New Mexico’s economy as a whole, individual subscribers will receive meaningful benefits. Utilities must provide credits to subscribers for at least twenty-five years after interconnection. The credit rate is proportional to the kilowatt-hour production of their share of the facility, and is “derived from the qualifying utility’s aggregate retail rate on a per customer-class basis”. That amount is then credited to the subscriber’s bill from the provider. If a subscriber uses less than their allotted credit’s worth of electricity in a given month, the surplus amount is applied to their next month.

The program has yet to start, but based on these factors and predictions, New Mexico’s plan passes the Institute for Local Self Reliance’s first principle for successful community renewable energy, tangible benefits.

Tribal lands cover 10% of New Mexico, the third highest of any state. There are already multiple small-scale tribal owned solar facilities, including a 115 KW system for the Santo Domingo Tribe. Native community solar gardens are exempted from the overall cap and the individual 100% of average annual consumption limits. The Act states further that “nothing in the Community Solar Act shall preclude an Indian nation, tribe, or pueblo from using financial mechanisms other than subscription models, including virtual and aggregate net-metering, for native community solar projects.

Beyond the Indigenous-focused pieces, the program contains further components designed to ensure access for a wide variety of subscribers, fulfilling ILSR’s fourth principle. All subscriber material must be printed in English, Spanish, and, if applicable, native or Indigenous languages. New Mexico’s Public Regulation Commission vows to seek input from a variety of stakeholders, which the Act notes includes “low-income stakeholders … disproportionately impacted communities … (and) Indian nations, tribes, and pueblos.” The program’s 30 percent capacity carveout for low-income subscribers compares favorably with other programs.

For more on solar in New Mexico, check out these ILSR resources:

Learn more about community solar in one of these ILSR reports:

This article was originally posted at ilsr.org. For timely updates, follow John Farrell on Twitter or get the Energy Democracy weekly update.