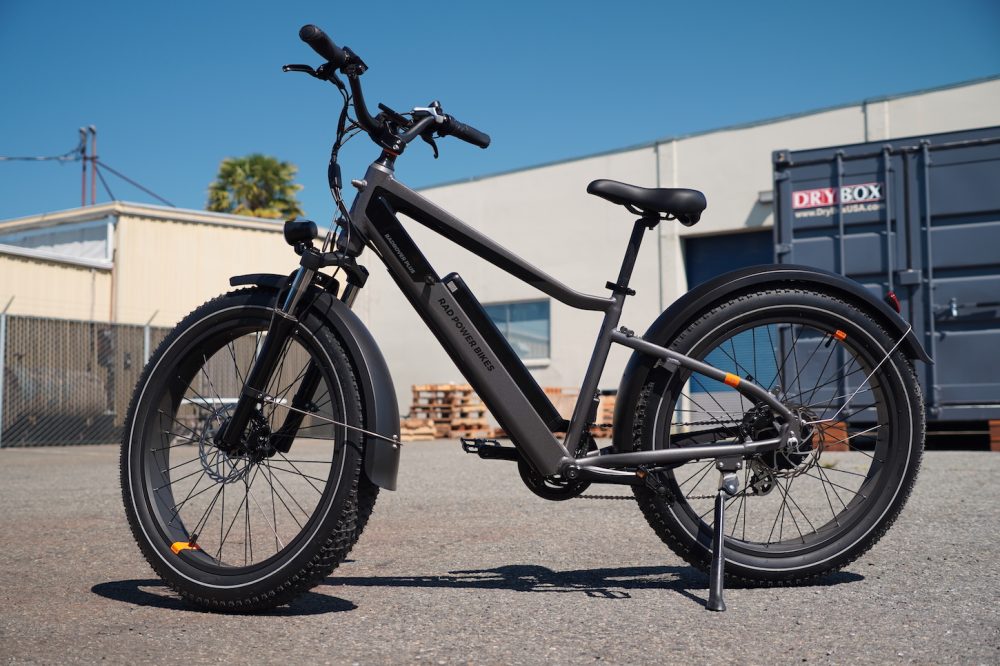 The last few years have seen several new models released by Rad, and 2021 is shaping up to be similarly bike-packed

When the RadRunner 6 Plus was unveiled last year, it wasn’t clear if the “Plus” moniker would follow on future models, but the new RadRover 6 Plus has solidified Rad’s intentions to provide both entry-level and higher-spec e-bikes that all combine the company’s reputation for value-oriented bikes and industry-leading service.

Across my many conversations with Rad Power Bikes Co-founder and CEO Mike Radenbaugh, the phrase Mike has continuously used to describe Rad’s model is “democratizing electric bikes.” That means bringing good quality e-bikes with a reliable support system to the masses at a price that most people can afford.

When it comes to quality, the new RadRover 6 Plus definitely raises the bar. Check it out in my video review below to see me cruising Seattle in style on the new e-bike. Then keep reading for all of my thoughts on this major update to the Rad line!

So much is new, where do we start?

There’s so much to talk about here, I don’t even know where to start.

Let’s begin with the new batteries. It’s a brand new design developed by Rad and it’s a big improvement. The batteries are semi-integrated so they sit down in the frame tube instead of resting on top. That buys you more space in your frame and simply looks sleeker.

The old plastic case has been replaced by extruded aluminum, and the battery also sheds its old key lock, which is now housed in the frame instead of coming along with the battery.

The capacity is the same at 672 Wh, but the whole thing is just a much nicer solution. It’s a bit longer, which makes it narrower and thus easier to hold in your hand. There are built-in rails on the sides that make it even easier to grip. And it even has this satisfying “pop” up when you turn the key to unlock it, like it’s just asking to be grabbed.

I didn’t just take the company’s word for it thought – I took the bike and its new motor to some steep hills and put it to the test. See it in action in my video above.

Moving on, we’ve got new hydraulic disc brakes that use ceramic pads for the best stopping power. The levers are adjustable so big and small hands can both fit nicely, and the hydraulic brakes allow more comfortable 1-finger braking. That’s a convenient factor for every day riding, but especially for off-road riding when you want to keep more fingers on the bars while modulating the brakes.

They’re also a lower maintenance component, which is one less headache to worry about down the road. No more pulling out a 5mm hex wrench and adjusting brake cables!

There’s also a new display screen – or rather two display screens. This one struck me as odd at first, as it seemed like it would just busy up the bars.

But as soon as I started riding the new RadRover 6 Plus, I totally got it. You see, the main display right in front of you has the info you’ll want at a quick glance, things like your speed, power, distance, etc. This screen is centered on the bars so it’s easy to look down and see the info that you’ll check often.

Then on the left side of the bars is the remote that controls the lights and pedal assist setting, and it also has a large format screen that displays your pedal assist level and battery, plus a light icon to let you know when your lights are on. These are items you only look at occasionally, so they don’t need to take up space on the main screen. Also, the buttons that control this info are located right next to the readout, meaning you don’t need to look to the left to find the buttons for pedal assist settings then look back to the center to see what pedal assist level you selected. It’s all right there in one location.

The buttons are also much bigger, which is great for when you’re bouncing around off-road and need a big target, or for when you’re wearing gloves in the winter. Older riders will especially appreciate the larger buttons and larger read out.

The frame has been re-engineered too. While it was always a good fit for larger riders (the RadRover is a big bike, make no mistake!) now the frame also fits shorter riders better as the saddle can now go even lower. The new frame has improved ergonomics and a lower center of gravity, partly helped by that new semi-integrated battery. The step-through model also has an even lower step-through since it isn’t clogged up by the battery mounted on the frame anymore.

The lighting has also been updated. The front gets a halo headlight and the rear light has been shifted onto the fender, meaning it can no longer be obscured when you’re carrying cargo or a rear rack.

Having tested the bike personally, I can say that the RadRover 6 Plus is the best RadRover to date, by far. In fact it’s one of the best fat tire e-bikes I’ve tested, even among more expensive offerings.

One small thing irks me, but it also offers a cool feature at the same time, leaving me with mixed emotions. The built-in USB charger from the previous RadRover is gone. Now there’s an upgraded USB charger that provides more power and is relocatable from the front to the rear of the bike (in case you want to power a device in your bag on the rear rack or in a rear bag). The only problem is it’s now an added accessory, not included equipment. On the plus side, you can daisy chain up to two in the front and two in the rear to power four devices from your bike. On the other hand, you’d have to buy four USB accessories.

All told though, I think Rad made great choices when it came to this new era for the RadRover 6 Plus.

Rad spent money where they needed to and saved money where it made sense. For example, unseen upgrades like ceramic brake pads instead of stock pads give riders safer, more responsive braking. That’s money well spent, even if it isn’t immediately obvious when looking at the bike. On the other hand, the 60mm spring fork is an economical and effective solution to offer good suspension but without the added cost of air forks that we find on many higher-priced electric bikes.

That’s something I asked Mike about specifically, since I find it particularly interesting now that Rad is aiming at both the budget-minded rider with low-cost $1,099 e-bikes and higher end customers with this new $1,999 RadRover 6 Plus. “To me, it’s all about whether or not something adds real value to the customer. If it doesn’t, I don’t want it on the bike,” Mike explained. He described how adding higher-performance parts like an air fork would be silly on a heavy electric bike where the weight savings aren’t worth the added cost. But investing in higher quality brakes, a battery that is easier to use and an interface that provides a better rider experience all speak to the company’s goal about making sure every component adds value.

At $1,999, Rad Power Bikes is definitely entering a different league with the RadRover 6 Plus. But from what I could tell from my day of riding the new model, they’re doing it right.

The bike features a number of key updates and new features that push it into more premium territory. By maintaining a healthy breadth of models on both the entry-level end of the spectrum and now the more premium end, Rad Power Bikes is offering a little something for everyone all under one roof. I just hope we get to see even more models get the “Plus” treatment in the future.

‘Coming very soon!’: Jeremy Renner shares image of new show which will be out ‘as soon as I’m back on my feet’
‘Spy balloon’ spotted over Latin America is for ‘civilian usage’, China says
Lectric XP Trike launches for pre-order as low cost, folding electric trike
‘I was not given a realistic chance’, says Liz Truss, as she makes comeback
Elon Musk cleared of deceiving investors with Tesla tweet