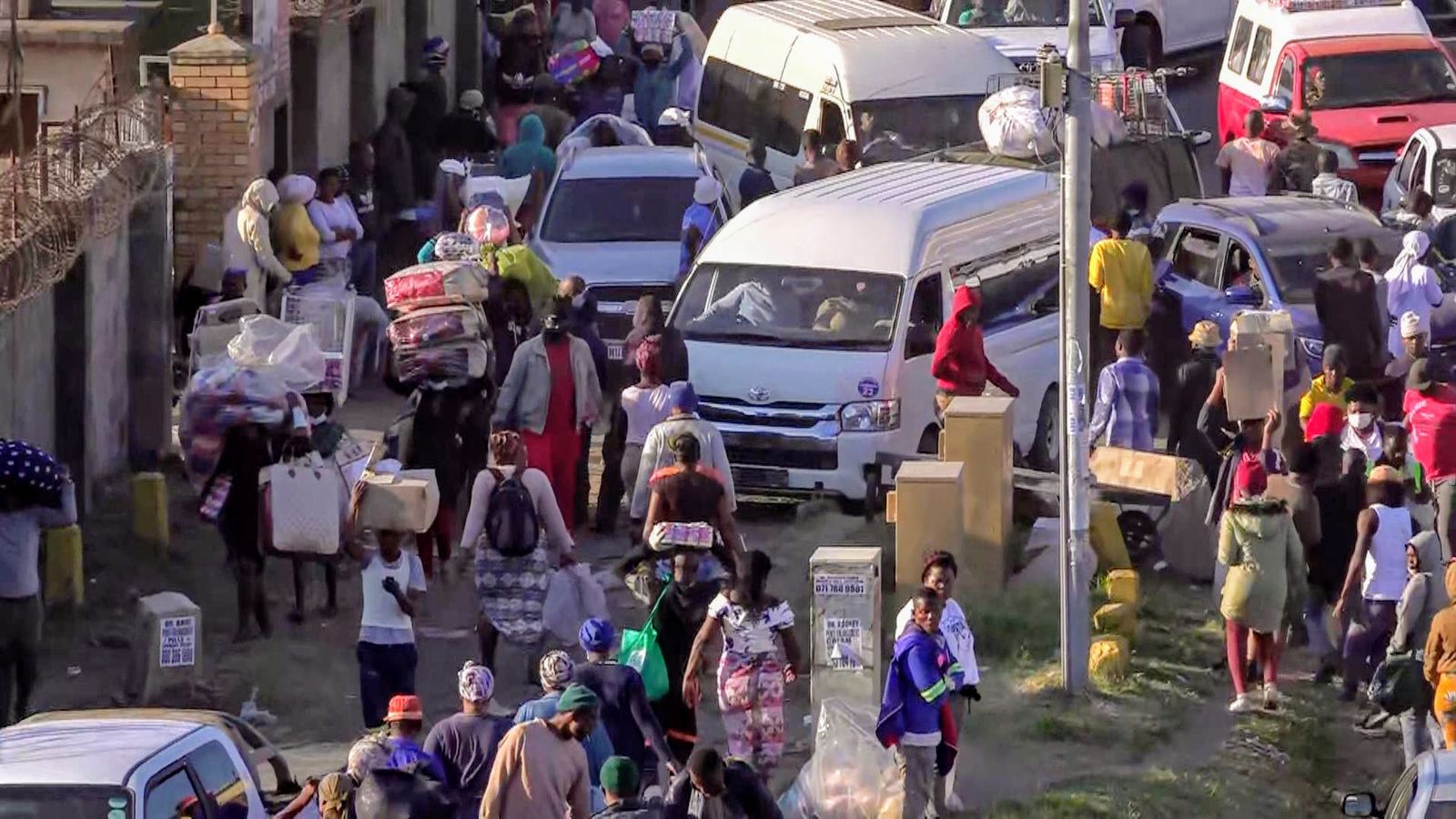 The number of soldiers deployed on the streets of South Africa has doubled to 5,000 as the army and police struggle to quell days of looting and violence.

President Cyril Ramaphosa is considering boosting troop numbers even more, as at least 72 people have been killed in the worst unrest in the country for years.

And some citizens are arming themselves to protect their property and businesses from the rampage, which has hit two of South Africa‘s nine provinces – KwaZulu-Natal, where Durban is located, and Gauteng, which includes Johannesburg.

In the Mobeni area of Durban, several food warehouses and a rice depot have been “invaded” and “ransacked”, according to Sky News correspondent John Sparks.

He described the scene as “absolute chaos” and “out of control” as looters have been “carting off” what was inside the facilities.

He said they had brought cars and trucks to fill up their vehicles with what they could get their hands on.

There has been mass looting and rioting in multiple locations in the city and elsewhere in the country, including in some areas of Johannesburg, such as Vosloorus.

The unrest was sparked by the imprisonment last week of former president Jacob Zuma, which has spiralled into days of looting.

At least 1,234 people have been arrested in waves of rioting. The violence has not spread to the country’s other seven provinces, where police are on alert.

Many of the deaths were caused by chaotic stampedes as thousands of people stole food, electric appliances, alcohol and clothing from stores, police said.

Thousands of soldiers have been deployed to support officers and try to restore law and order.

But Sparks said the army was nowhere to be seen as people were just “helping themselves”.

He added: “This is really out of control.”

Extraordinary scenes in Mobeni in Durban as thousands of people loot food warehouses and a rice depot … people are hungry but here, people have brought trucks and cars and stuffed them full with anything they can seize. pic.twitter.com/Z34uHMveqh

“What we have here is something quite extraordinary. People have broken into food warehouses and they are stripping them, they are emptying them.”

Among the items being stolen were mattresses, kitchen appliances and boxes of sardines.

In eastern Johannesburg, some shopping centres continued to be targeted, while in Soweto township, south of the city, police and army units patrolled malls and streets.

Acting minister in the presidency, Khumbudzo Ntshavheni, said the government was working with the consumer council to ensure food security.

Police roadblock in Durban run by a handful (5) officers … looters are stopped but they don’t have the infrastructure to arrest them… pic.twitter.com/fguN8Ff9wr

There have been fears that the anarchy and looting could lead to food shortages.

She claimed putting troops on the streets was beginning to have the desired effect.

She said: “We are getting positive reports that the deployment of additional law enforcement agencies is starting to reap positive results as we are seeing less incidents of violence and looting reported.”

She added: “5,000 members of the national defence force have already been deployed on the ground. Law enforcement officers, supported by the military, are working tirelessly to ensure the country returns to peace and stability and that those responsible for the instability are quickly brought to book.”

Sparks had earlier been at another mass looting location where people told him they were “hungry”.

Lots of South Africans have lost jobs in the pandemic, including during lockdowns, and they were living “very much a hand-to-mouth existence”.

More than half of the country’s 60 million people are living in poverty, with an unemployment rate of 32%, according to official statistics.

Violence broke out after Zuma began serving a 15-month sentence for contempt of court.

He was jailed for refusing to comply with a court order to testify at a state-backed inquiry investigating corruption claims while he was president from 2009 to 2018.