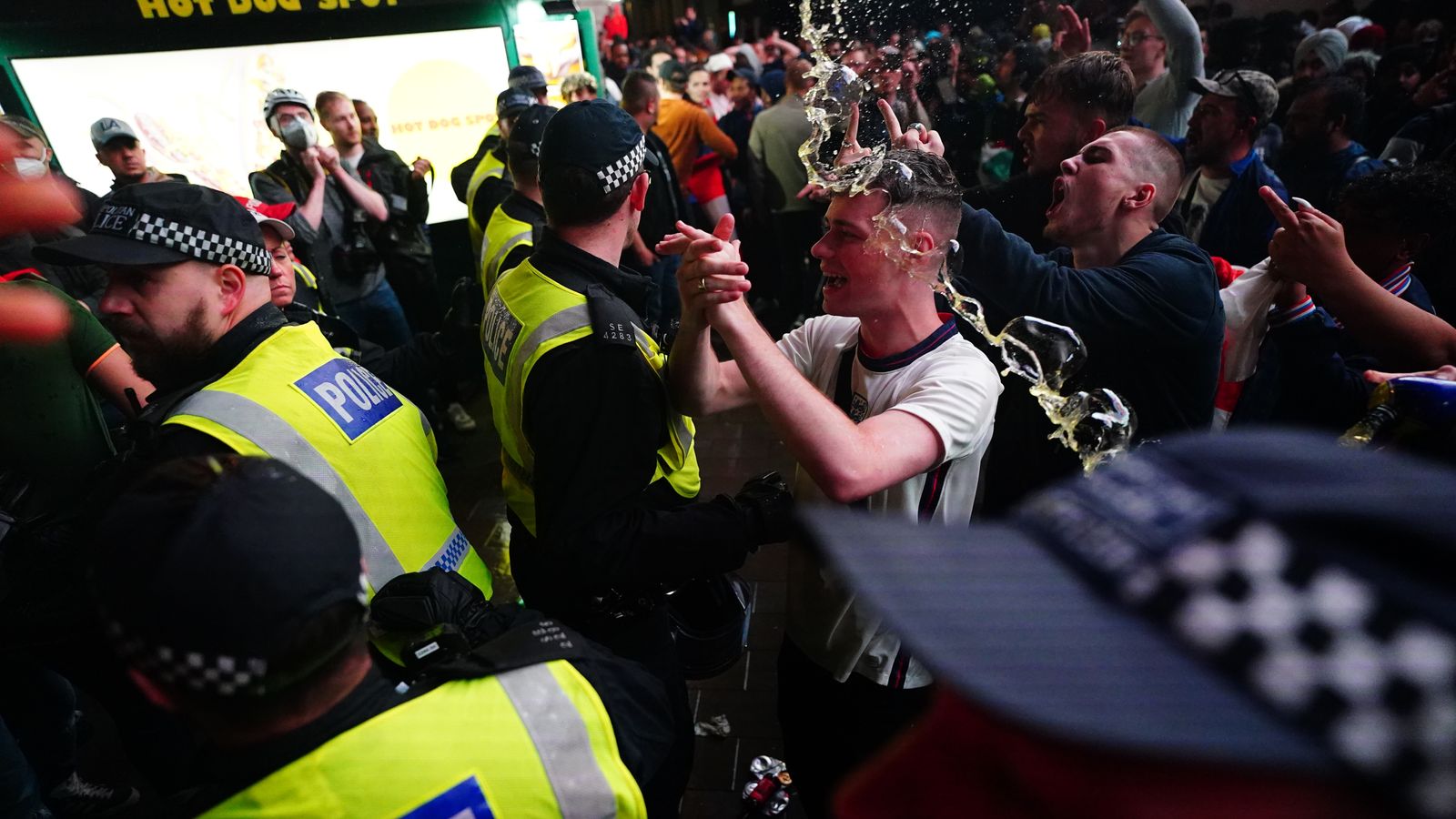 The body, which represents thousands of London’s police officers, tweeted: “These people should be ashamed of themselves.

“They are not fans. They are thugs. We wish our injured colleagues well.”

The Met Police said 19 of officers were injured when they “confronted volatile crowds” in the capital after the game and 49 people had been arrested for a “variety of offences”.

Police said some people in the capital had been “jumping off street lamps or hoardings”, something officers warned “could easily end in injury”.

Clean-up operations were well underway in the capital by 7.30am following the huge mess left by football fans, with only a handful of diehard England supporters remaining around Leicester Square.

Before kick-off, up to 100 ticketless fans broke through security barriers at Wembley to get into the stadium while there were reports of match stewards being abused.

Footage showed people jumping over walls and running towards the stadium to gain access, with police on a manhunt to track down those who got in without tickets.

There were also scuffles and clashes with officers throughout central London where people gathered to watch the match, including at Leicester Square, Trafalgar Square and Piccadilly Circus.

Junior minister Edward Argar told Sky News that these fans do not represent the majority of supporters.

He said: “I think the police did a fantastic job and sadly we saw a number of police officers, as I understand it, injured last night and I think there have been 45 arrests made so far, and action will be taken against those who have perpetrated these offences, who broke the rules or broke the law.

“The police did, I think, a fantastic job – they know what they are doing, they know how to operationally police events.

“It is sad when a very small number of people, a tiny minority, bring the sport into disrepute by trying to do something like this.”

He added: “Again, I would say they are not reflective of the fans of our national game and our national team.

“The police will take, I know, all action necessary against those who have been arrested where they can prove an offence has been committed.”

Moment young girl pulled from rubble of building in Syria
Inflation Reduction Act has spurred 100,000 new green jobs so far: Here’s where they are
Westminster’s ‘nepo babies’ are here to stay – whether we like it or not | Adam Boulton
Electric truck maker Rivian confirms it is developing an electric bike
Record-breaker Kane sees Spurs dent City title hope