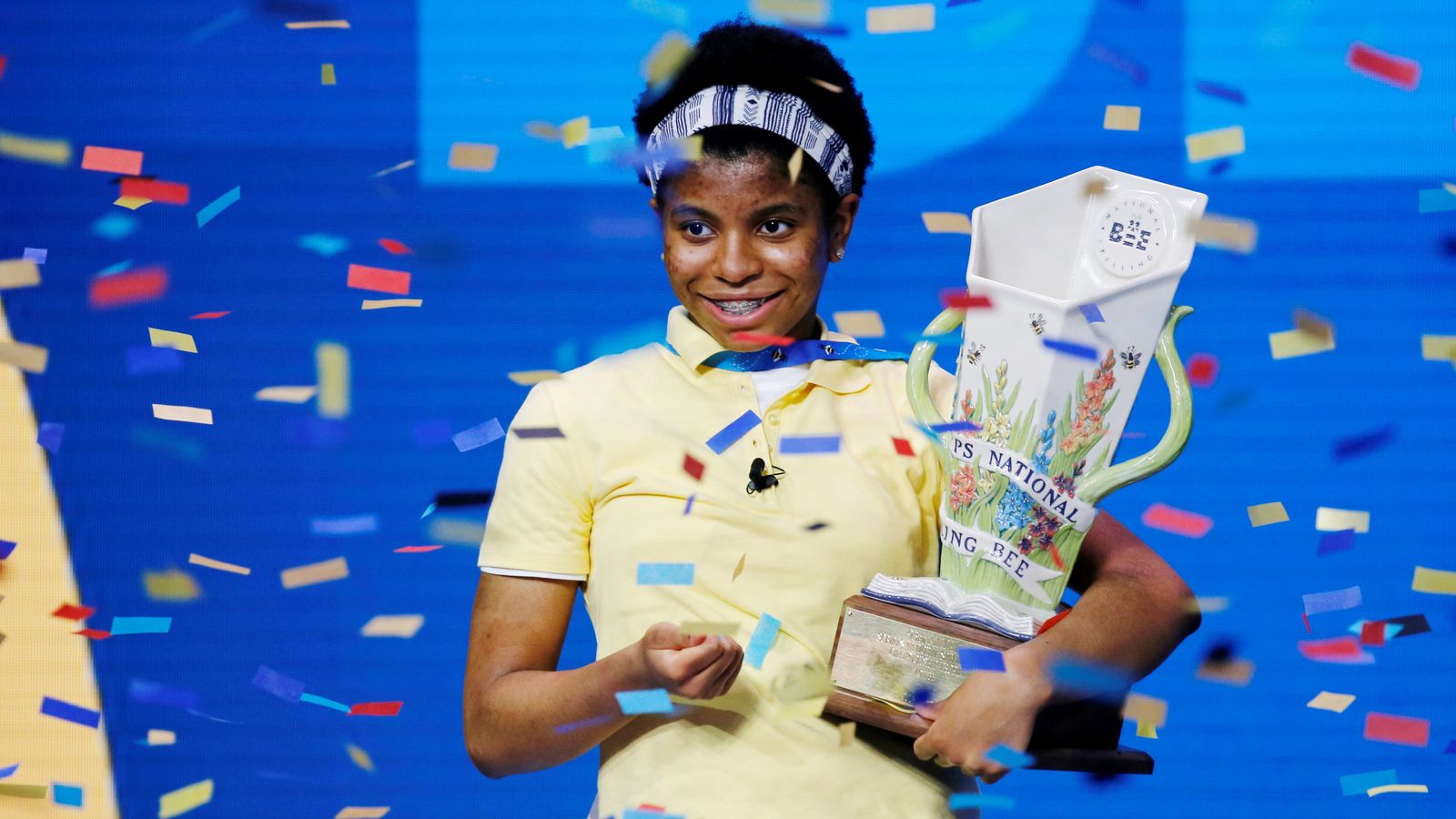 A 14-year-old girl has made history by becoming the first African American to win the 96-year-old US Scripps National Spelling Bee.

Zaila Avant-garde, a sporting prodigy with several Guinness World Records to her name for dribbling multiple basketballs at a time, won the event by correctly spelling Murraya – a genus of tropical Asiatic and Australian trees.

The confident teenager from New Orleans appeared relaxed, peppering pronouncer Jacques Bailly with questions about Greek and Latin roots, and bantering with the judges and moderators before jumping and twirling for joy on stage as she was told she was right and was declared the champion to claim the $50,000 (£36,308) top prize.

“I was pretty relaxed on the subject of Murraya and pretty much any other word I got,” she said afterwards.

It wasn’t all plain-sailing, though. She had struggled with another botanical word.

Pausing at the unstressed sound in the middle of Nepeta, a word for another plant genus, she collected herself, started again, and nailed it.

Zaila, who hopes to one day play in the WNBA or even coach in the NBA, described spelling as a side hobby, even though she routinely practiced for seven hours a day.

She is the first black contestant to win since Jody-Anne Maxwell of Jamaica in 1998, also the only international winner.

Ahead of the final, she told the Associated Press that she hoped to inspire other African Americans, who she said might not have the money to pay for the tutorials needed to be competitive.

She even thought of MacNolia Cox, who in 1936 became the first black finalist at the bee and wasn’t allowed to stay in the same hotel as the rest of the contestants.

Many top Scripps spellers start competing when they are of nursery age. Zaila only started a few years ago, after her father, Jawara Spacetime, watched the competition on TV and realised his daughter’s affinity for doing complicated maths in her head could translate well to spelling.

She began working with a private coach, Cole Shafer-Ray, a 20-year-old Yale student and the 2015 Scripps runner-up.

He said: “Usually to be as good as Zaila, you have to be well-connected in the spelling community. You have to have been doing it for many years. It was like a mystery, like, ‘Is this person even real?’

“She really just had a much different approach than any speller I’ve ever seen. She basically knew the definition of every word that we did, like pretty much verbatim. She knew, not just the word but the story behind the word, why every letter had to be that letter and couldn’t be anything else.”

Zaila’s win also breaks a streak of at least one Indian-American champion every year since 2008, with children of South Asian descent dominating the competition.

The competition finals returned before a live audience at the Walt Disney World Resort near Orlando after being cancelled last year because of the coronavirus pandemic.