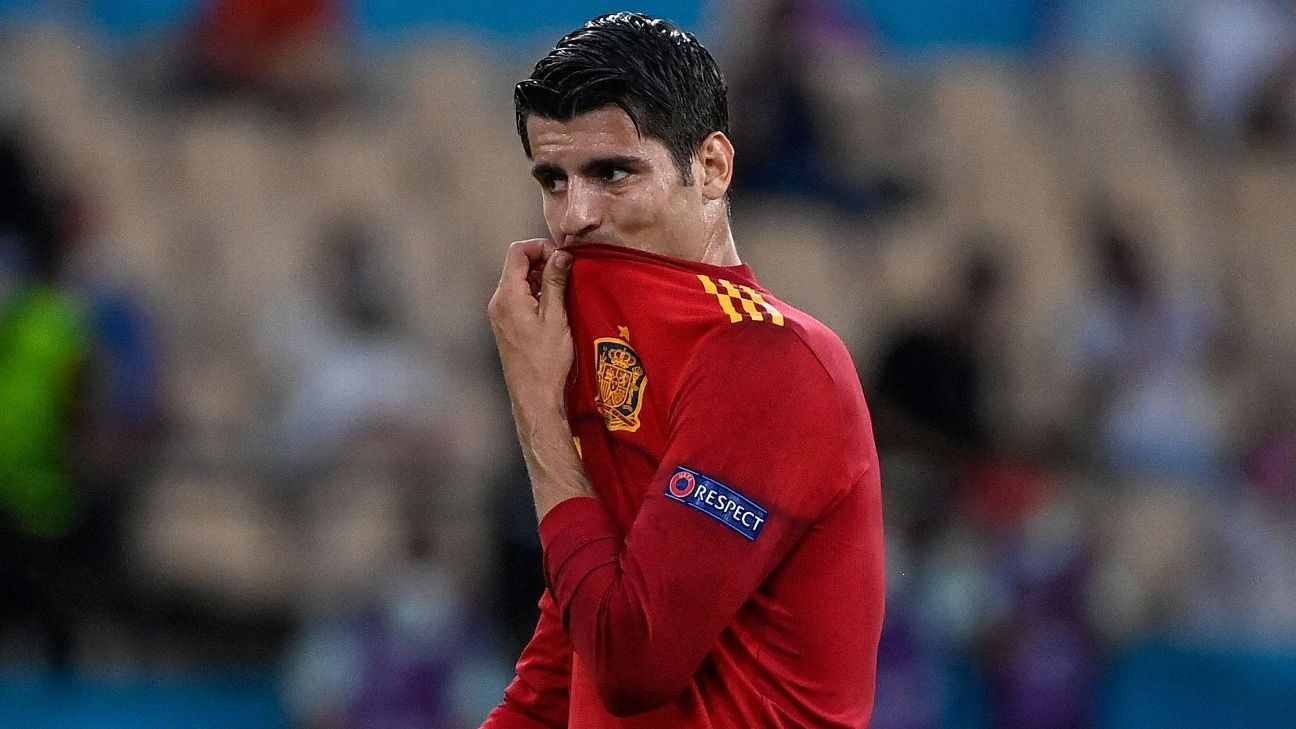 Luis Enrique has backed Alvaro Morata to win over Spain’s fans who have whistled him, favourably comparing the forward’s goalscoring record to players like Kylian Mbappe, Karim Benzema and Romelu Lukaku.

A section of the crowd at Seville’s La Cartuja stadium whistled Morata after he missed a chance during Spain’s 0-0 draw with Sweden on Monday in their Euro 2020 opener, while some fans sang “Morata, how bad you are” during a pre-tournament friendly with Portugal.

Luis Enrique has confirmed that the Juventus forward will start for Spain against Poland on Saturday, saying the team will be “Morata and ten more.”

“Coaches have access to a lot of information that fans and journalists don’t have,” he said in a news conference on Friday. “They don’t see the training sessions. I say ‘Morata and ten more’ as a stimulus to give him more confidence, but not just because he’s missed a chance… He does a lot of things well. It isn’t about gifting him anything.”

The coach went on to praise Morata’s scoring record for Spain since making his debut in 2014.

Morata — who Juventus confirmed this week will return to play for them next season on loan from Atletico Madrid, after scoring 11 goals in Serie A last campaign — said he’d been “calm” this week.

“I’ve been working since the under-17s to be here, to play at the Euros,” he said. “You can’t please everybody. When you get criticism for your work, you have to accept it and respect it… I’m looking forward to the match tomorrow, not just for me but for the team, I believe we can do something great.”

The 28-year-old denied that his first-half miss against Sweden had been playing on his mind, but admitted he had struggled to sleep afterwards.

“They’re moments that happen so fast that it doesn’t give you time to think,” he said. “I don’t consider it a bad miss, the goalkeeper is fast and I had to try to place my shot towards the post. It’s part of the job.”

He added: “When you draw a game you deserve to win, it’s normal that it’s hard to sleep afterwards, with the adrenaline. I talk to [the team psychologist] a lot, about everything.

“He’s available to me just like all the players. I’ve had a lot of messages that I appreciate from people, but I’m fine. I’ve had a long career. People’s opinions don’t change my life or make me sad.”

Morata also called for a normalisation of discussion of mental health issues in football. He previously spoke about coming close to suffering depression during his first season at Chelsea and began to see a psychologist to help him cope with the day-to-day pressure ever since.

“I think it’s important, not just in football but in any job people might have,” he said. “It’s true that a lot of mental health issues, anxiety, depression, aren’t considered with the seriousness they should be. Sometimes someone with anxiety or depression is told to ‘cheer up’… I’d urge people to talk to specialists. It’s a problem.”