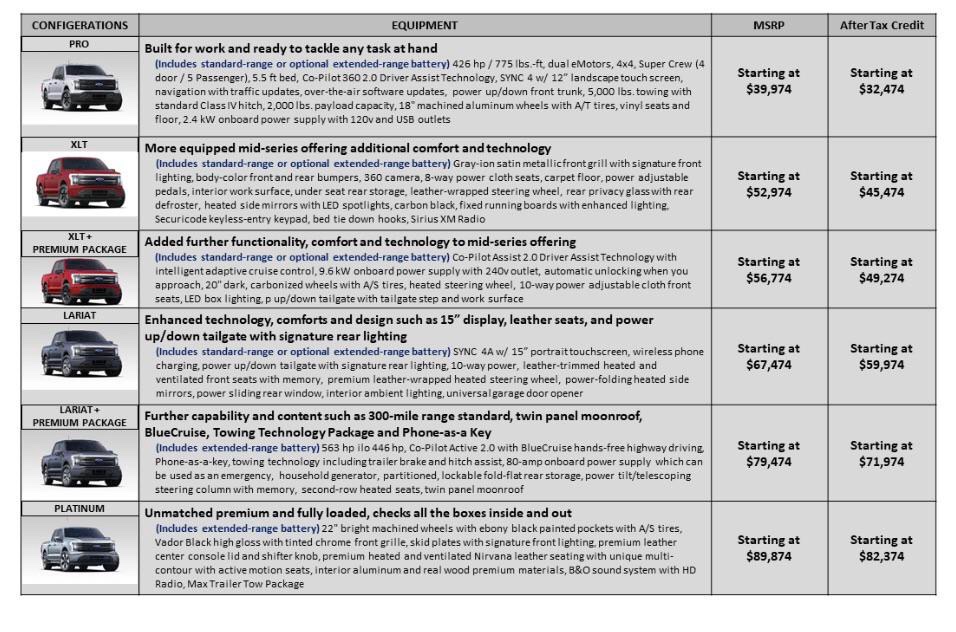 We’ve not seen excitement over an EV quite like the furvor over the F-150 Lightning – and for good reason. The F-150 package combined with the ability to use the huge battery power to power a worksite or back up a home combined with the speed and power of EVs is a tantalizing cocktail.

But potential customers have only been treated so far with base prices and spec packages. Ford this week, however, gave a better idea of what the different packages might contain and, more importantly, some price points.

Before we show you the goods, which were uploaded to Reddit by u/Nifty_5050, we should note that these aren’t Ford’s final prices/packages. They are however a good gauge of what Ford is thinking, and actually put out by Ford, so worth significant consideration.

Results from this survey will help us understand consumers’ demand for various models, options and accessories. This survey is not representative of final pricing or feature availability.

Also note some spelling slips like “Configerations?” so clearly not very well vetted, at least by PR, so caveat emptor…

Of particular note, the Extended Range packages besides the Pro version start at close to $80,000 or $71,974 after $7,500 federal xax credit. That makes the Pro Extended, if still priced at $10,000 above standard range (also where the fleet version is priced), the best deal on the page.

It looks like all Extended Range models will send out 80A to a worksite.

F150gen14 got more details on each model. Click to enlarge:

The F-150 is America’s best-selling vehicle for over a generation, but the electrified version will be up against some new competitors. Chief among these will be Tesla’s Cybertruck and Rivian’s R1-T.

Rivian, which is partially owned by Ford, looks to be the first out of the gate with their R1T pickups. The trucks, which have been delayed multiple times, are now due next month and have been tested extensively on streets over a year. Rivians have higher price points (though a cheaper model is rumored) and are aimed at the high end of the market with some incredible configurations.

Tesla, with its massive battery scale, has lower price points on its Cybertruck, which even beat Ford in some areas. The California automaker’s plans/configurations/prices have been known to change however as production nears. Tesla’s Cybertruck futuristic design has often been seen as polarizing though the company has had a significant number, possibly over 1 million, of $100 pre-orders. Polls have put the Cybertruck neck and neck with Ford’s F-150 Lightning though Ford is heavily skewed toward traditional truck buyers.

Ford’s traditional competitor GM has announced a high-end GMC Hummer Truck and SUV that will be a six-figure purchase for the near future and is expected to launch a more competitively priced Electric Silverado in the coming months.

Ford execs have also hinted at electric versions of the newly minted smaller Maverick pickup and iconic Bronco in recent months, but no formal plans have been laid bare.

Ford has produced the following F-150 spec sheet at launch:

We’re seeing a ton of hype for the F-150 and not just from traditional EV buyers. No EV has quite hit the mainstream like the Lightning, so any information we can get is of great interest.

On the surface, a lot of these prices seem exorbitant but the higher-tiered trims of the F-150 actually match up with the high margin gas versions pretty well and all of the extras you get with electric.

In fact, I’m (not, ha!) concerned Ford might have “Osborne Effect-ed” the best-selling vehicle in its lineup and in America. Who is going to buy a F-150 Raptor now that a four-second 0-60 model is available next year that will blow its doors off? Who is going to pass up that huge/powered Frunk space/Tailgating dream for a carbon belching motor? Can a typical F-150 quietly power a Texas home through a now common three-day power outage?

In fact, Ford is scrambling to keep up with the demand already

It will be interesting to see Ford’s ICE sales tank over the next year. I imagine the 300-mile range (at load) will be the only real limiting factor here.

Puss In Boots is back, and new film’s ‘dark’ storyline has struck a chord with Antonio Banderas
Watch Tesla Cybertruck’s impressive 4-wheel steering at work
Google poised to unveil how it plans to take on ChatGPT
First images released of Nicola Bulley on day she vanished – as private underwater rescue team joins search
Newgate wins race run only by 4 Baffert horses