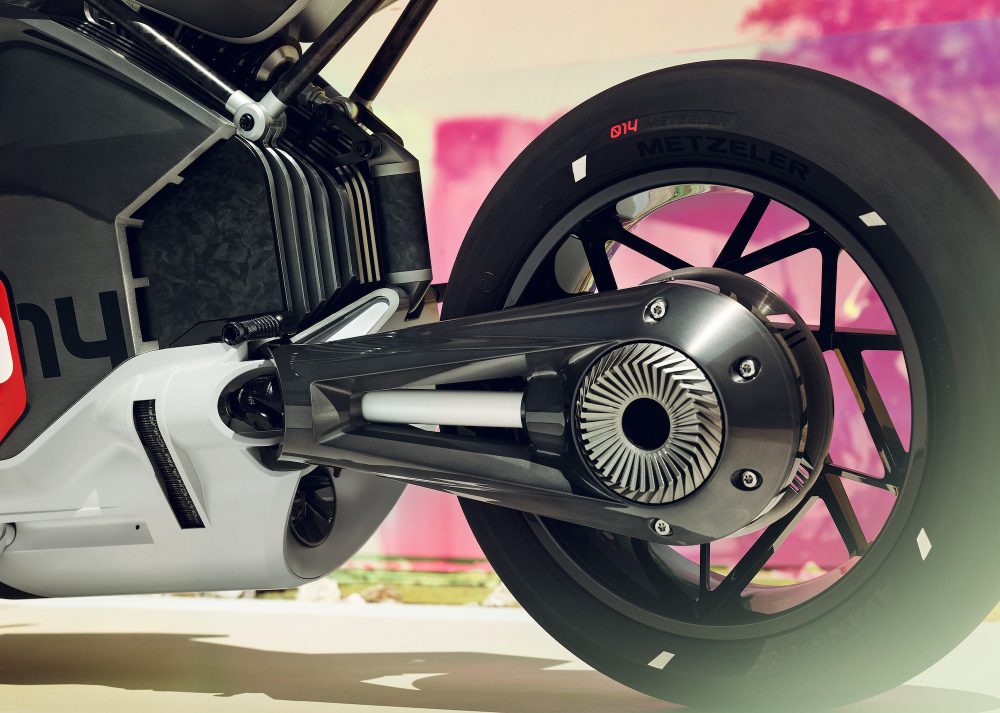 BMW loves its driveshaft motorcycles, but the electric motorcycle industry hasn’t been as keen on them.

Electric motors and batteries have freed motorcycle manufacturers from the typical design constraints of gas-powered drivetrains. Unshackled from traditional gas tanks and bulky internal combustion engines, designers have been granted unprecedented levels of freedom thanks to the modularity of electric motorcycle components.

Even so, most of that innovation has gone into interesting battery designs and placements. Outside of the Harley-Davidson LiveWire, electric motors have largely still been mounted transversely and don’t vary too considerably from one manufacturer to another.

The traditional transversely-mounted electric motor creates a simple and easy method to connect the motor’s output shaft to the rear wheel sprocket or pulley via chain or belt drive, respectively.

Some electric motorcycles have opted for gear reductions, while many others simply use a direct drive setup.

But BMW has explored driveshaft designs for its electric motorcycle concepts such as the Vision DC Roadster.

Now a new patent shows how such a system might work.

As you can see in the patent drawings, the inclusion of a driveshaft would allow BMW additional freedom in motor placement. It would also create the potential for interesting gear reduction options.

A planetary gear system (marked as item 20) can be seen in the patent drawings, which would allow BMW to use a high-efficiency and high-speed electric motor that could be stepped down to reasonable rear wheel speeds.

The patent drawings also show options for various engine placements including with the longitudinally mounted motor being placed both co-axially with, or offset from, the bike’s long axis.

Constant-velocity joints in the driveshaft would enable such freedom of placement, potentially paving the way for some of the more far-out and futuristic motorcycle designs we’ve seen in BMW’s concepts.

While we originally assumed BMW was just throwing crazy designs at the wall to see what would stick when the company unveiled the first Vision DC Roadster electric motorcycle concept back in 2019, new design filings show that the manufacturer may be preparing to actually produce the bike.

If the driveshaft design was implemented, it could make BMW the first electric motorcycle manufacturer to provide a production electric bike with such a shaft drive setup.

We’ve seen other electric motorcycles attempt this, such as the nascent electric motorcycle manufacturer ALYI that claims to be working on a BMW-inspired bike with a shaft drive. But so far the company has produced around a hundred more fluffy press releases than motorcycles, so it doesn’t appear they’ll be beating BMW to the punch.