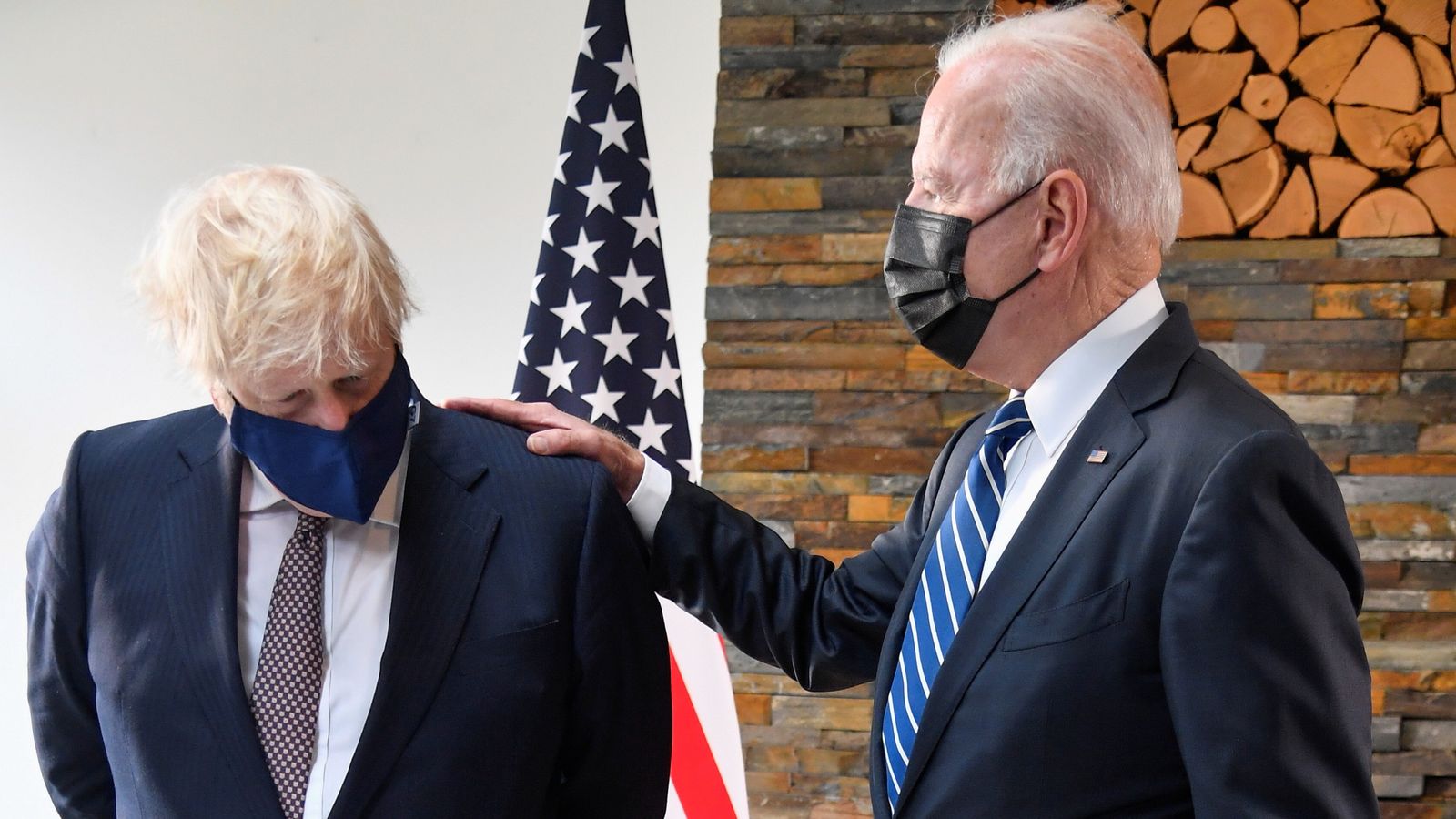 Boris Johnson has described working with US President Joe Biden as a “breath of fresh air” following the pair’s first face-to-face meeting.

The prime minister met Donald Trump’s successor in Carbis Bay on Thursday, ahead of this week’s G7 summit at the Cornwall resort.

Mr Johnson said the new US administration had “so much they want to do together”, including on NATO and climate change – subjects on which Mr Biden has dramatically different viewpoints to Mr Trump.

And the prime minister also suggested a possibly strained conversation with the US president over post-Brexit arrangements in Northern Ireland had been avoided, as he hailed the “common ground” between the UK, US and EU on preserving the Good Friday Agreement.

It follows reports Mr Biden’s administration had accused Mr Johnson’s government of “inflaming” tensions during an ongoing row between the UK and EU over the implementation of the Northern Ireland Protocol.

After the pair’s discussions, which lasted around an hour and 20 minutes, Mr Johnson said: “The talks were great, they went on for a long time, we covered a huge range of subjects.

“It’s wonderful to listen to the Biden administration and to Joe Biden, because there’s so much they want to do together with us, from security, NATO, to climate change.

“And it’s fantastic, it’s a breath of fresh air.”

Mr Johnson and Mr Biden had been due to meet at Saint Michael’s Mount, an historic castle on a tidal island off the coast of Cornwall.

Reports suggested their wives, Carrie Johnson and Jill Biden, were due to have a tour of the island while the leaders held talks.

But a Number 10 source confirmed the visit to Saint Michael’s Mount was “sadly off due to the weather” and the talks were rearranged to Carbis Bay, where the G7 summit will be held between Friday and Sunday.

Prior to their meeting, Mr Biden and Dr Biden, Mr Johnson and Mrs Johnson, stood together to enjoy the view across the bay.

And, after Mrs Biden and Mrs Johnson left the two leaders, Mr Biden revealed how he told the prime minister “we have something in common, we both married way above our station”.

“Or indeed on anything else, I think it highly likely,” he added.

Dr Biden wore a jacket embroidered with the word “LOVE” on the back, an item she previously wore at the kickoff rally of her husband’s presidential campaign in 2019.

Asked about her outfit, Dr Biden said: “I think that we’re bringing love from America.

“This is a global conference and we’re trying to bring unity across the globe and I think that’s important right now – that people feel a sense of unity… feel a sense of hope after this year of the pandemic.”

Some immediately drew comparisons between Dr Biden’s jacket and her predecessor as first lady, Melania Trump, who wore a green jacket that said, “I Really Don’t Care, Do U?” on a 2018 trip to a Texas border town to visit migrant children housed in shelters.

Before getting to the substance of their talks, Mr Biden and Mr Johnson inspected documents related to the Atlantic Charter, a declaration signed by Winston Churchill and Franklin D Roosevelt in August 1941 that set out common goals for the world after the Second World War.

Mr Johnson noted that the charter laid the foundation for the United Nations and NATO.