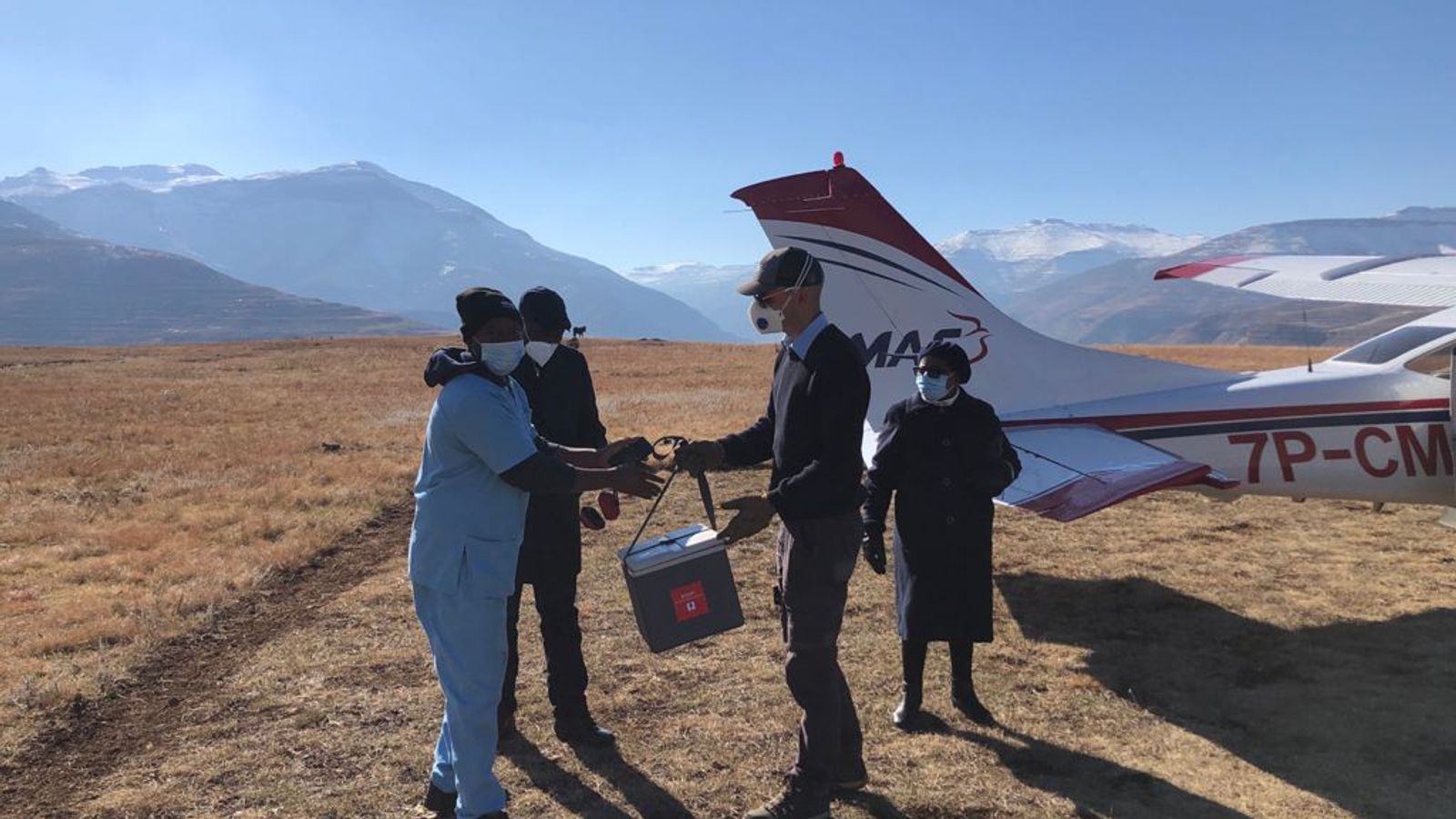 There is an old, corrugated hanger in the centre of Maseru, the diminutive capital of the kingdom of Lesotho and through the doors we could hear the words of prayer.

Inside, amongst the wings and tails of several brightly coloured aeroplanes, there were medics and mechanics getting themselves ready for the day ahead.

The government-run unit is assisted by a Christian charity called the Mission Aviation Fellowship and together they provide medical services and emergency treatment to communities that are completely inaccessible by road.

Live COVID updates from the UK and around the world

Yet the team that runs this service has been presented with a new and weighty task.

As COVID-19 spreads and mutates in southern Africa, its members have been asked to deliver and administer vaccines to much of the nation.

Lesotho acquired a batch of 36,000 AstraZeneca vaccines through the UN-backed COVAX facility in March and health workers were prioritised for their first dose.

The French government donated an additional consignment to ensure they are fully protected but the vast majority of 2.2 million Basothos have yet to receive a vaccine.

The flying doctors are doing what they can and we followed them for the day as they delivered a small batch of vaccines to a community called Kuebunyani.

It was a complicated trip as the pilot had to pick up a box of AstraZeneca vaccines in another community, called Thaba Tskeko. Its hospital still had a few vials left.

“How many vaccines have you got now,” I asked the Flying Doctor Services medic, Dr Justin Cishiya.

“How many are you going to need in total?”

“In total, we will need, let me estimate, two million doses.”

We strapped our precious box in the back of the plane and headed east in the direction of Kuebunyani.

This district of some 10,000 people clings to the slopes of the Maloti range and the pilot had to negotiate its rudimentary airstrip.

Our cargo was then handed over to a nurse called Paul Enock.

“How many people have been vaccinated here so far?” I asked.

“So far 73, yes, mostly the village health workers and the health centre committee and some of our staff members.”

“Yes, especially for the people (who live) here, yes.”

It may be an isolated spot but the message has gone out about COVID-19 as the third wave of infection begins to take hold in Africa.

Cases are on an upward trend in 14 countries and in the past week, new cases rose by more than 30% in eight countries.

In Kuebunyani, we watched as local residents begin to congregate. Some had left their homes the day before to reach the clinic.

“Why do you want to get a COVID vaccine?” I asked.

“It is you (the health workers) who told me to come here,” he said, bursting into laughter.

“Do you think the virus could come here to the mountains?”

“Here? Of course, it will come here because human beings live here.”

Several village health workers, a local official and a handful of senior citizens with chronic conditions were offered these precious vaccines and one man told us he felt fortunate to receive one.

The supply of vaccines to Africa has ground to a halt with the India-based makers of the AstraZeneca vaccine now concentrating production at home.

The distribution of Johnson & Johnson vaccines has been blocked after a batch was contaminated in the United States.

Sky News understands there are one million J&J vaccines “ready to be shipped within an hour” from a factory in neighbouring South Africa but the manufacturer cannot get clearance to move them.

In response the World Health Organisation and others are pleading with wealthy nations to move immediately and donate their stocks.

Seven countries have said they will make contributions via COVAX but only France has actually delivered the goods.

As we left Kuebunyani we asked an administrative nurse, Mampho Leleka, what she thought of the discrepancy in vaccines between rich and poor countries.

“We are not comfortable, it is not fair at all. It has to be rolled out as (quickly) as possible because this pandemic is killing people.”

This mountain kingdom – like much of Africa – has been left behind in the race to vaccinate the public.

Only 1% of the public has been inoculated in sub-Saharan Africa. But this shapeshifting virus is encircling the world and the protection of Basothos should become everyone’s responsibility.