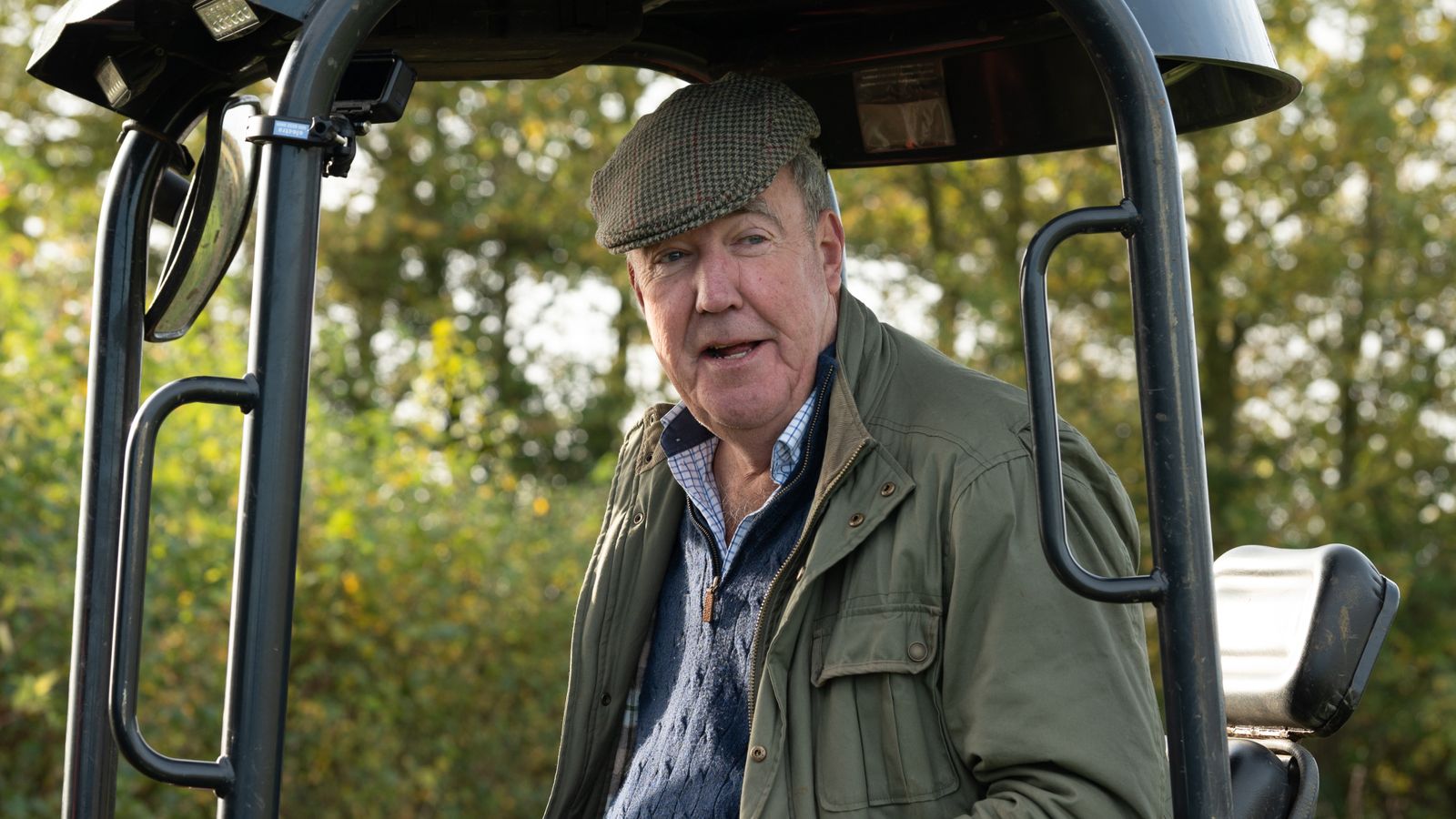 He’s known for hosting The Grand Tour and previously Top Gear, but in his latest show Jeremy Clarkson is swapping cars for cows as he takes up farming.

Clarkson‘s Farm sees the presenter getting to work on land he owns following the retirement of the farmer who had been looking after it, and follows his antics for a year.

In order to learn the ropes, the 61-year-old calls in local farmer Kaleb Cooper, who almost immediately has to tell Clarkson off and put him in his place.

It’s a sight many viewers won’t be familiar with, but Clarkson claims it’s something he’s used to.

“I get shouted at all the time,” he told Sky News’ Backstage podcast. “I’m constantly being shouted out by newspapers and bosses, I’m always being shouted at. You don’t see it on television – I’m shouting at James May and Richard Hammond, that’s usual.

“But in real life, you get shouted out by people who know what they’re doing. I didn’t know what I was doing… I thought I know best, and then, of course you realise you don’t know best, you must listen.”

There’s no doubt it’s been a steep learning curve for the star, who says he bought the farm that he lives on in 2008 on impulse and then decided to work on it himself on impulse, too.

He says the idea to turn his endeavours into a TV show grew as he started farming and realised how much he had to get his head around.

“Whatever [farming insights] we get are from the news, which is: look at this American with an overheated shed full of animals that are dying of thirst and hunger and misery, or you’ve got Kate Humble with a newly born lamb in a nice little barn, bottle feeding it.”

The presenter says his farm is typical of many in the UK, so the series really raises awareness of the challenges faced by farmers.

“It’s not the one that falls over and catches fire, it’s the one who gets shouted out all day long.”

Clarkson unwittingly chose a tough year to start his new career, not because of the coronavirus pandemic, but because the weather made life for farmers extremely challenging.

He says there were five weather records broken in the year from 2019 to 2020, with a wet autumn and a hot dry spring.

But despite the rough start, Clarkson has no regrets. “Because I’ve got nothing to judge it against – I’d never been in a good year and here I am in the next year and we’re having the wettest spring just about ever… it’s all mad, so I can’t judge.”

Cooper, the young farmer tasked with teaching Clarkson the basics, told Sky News’ Backstage Podcast the star does not make a good pupil.

“He didn’t listen, he just switched off and goes, ‘you know what, I know how to do it anyway’.”

Clarkson’s Farm is out on Amazon Prime Video – hear our review in the latest episode of Backstage, the film and TV podcast from Sky News

How the on and off history of standalone energy departments reflects crises faced by the UK
Big Oil rakes in record profit haul of nearly $200 billion, fueling calls for higher taxes
Family and friends insist ‘no evidence’ behind police theory Nicola Bulley fell in river
‘So heartbreaking’: Love Island star Ekin-Su eager to volunteer in Turkey – and reveals family have been caught in disaster
‘I can’t put my girls to bed again with no answers’: Nicola Bulley’s partner reveals heartbreak as new CCTV released