Hospitalisations for COVID-19 remain “broadly flat” despite a rise in the Indian variant in parts of the UK, the health secretary has said.

Matt Hancock told the House of Commons that the majority of people in hospital “appear to be those who haven’t had the vaccine at all”.

He also said that only about 1% of people who had tested positive with the Indian variant, also known as the Delta variant, had been admitted to hospital.

Live updates on the COVID-19 pandemic

The health secretary said: “As of 3 June, our data show that of the 12,383 cases of the Delta variant, 464 went onto present at emergency care and 126 people were admitted to hospital.

“Of these 126 people, 83 were unvaccinated and 28 had received one dose and just three had received both doses of the vaccine.”

Mr Hancock said government figures show “jabs are working” and encouraged the public to get vaccinated – as he announced over-25s in England would be eligible to book one from Tuesday. 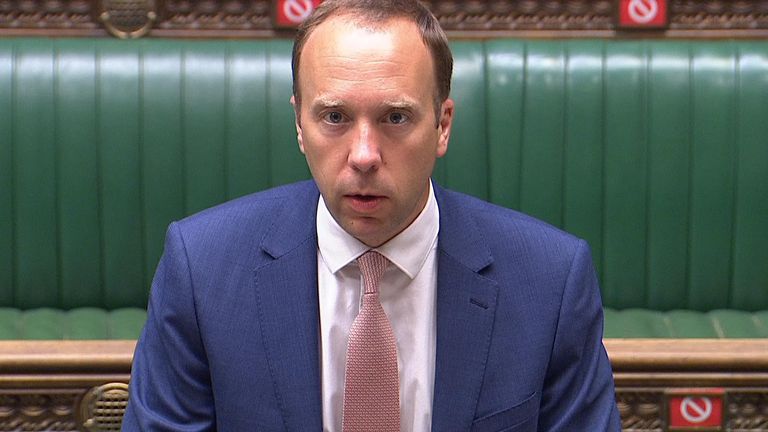 A total of 40,460,576 people in the UK have received at least one dose of a vaccine so far, with nearly 28 million getting both doses.

Despite the speedy rollout, which began six months ago, there is concern the Delta variant could delay England’s final step out of coronavirus restrictions – scheduled for 21 June.

Mr Hancock said it was “still too early” to say whether it would go ahead, despite former chief scientific adviser Sir David King stating that it would be wise to delay the easing of restrictions.

According to data gathered by Sky News, the Delta variant now makes up three-quarters of new cases.

The Alpha, or Kent variant, was the dominant variant in the UK as recently as 1 May, making up 85% of cases.

But since 29 May, the number of people testing positive for that variant is down to 17%, while the number of Delta cases recorded was 79.5%.

Calderdale in North Yorkshire is also launching surge testing this week following a small number of confirmed cases of the variant.

Adults and children aged 12 and over are being encouraged to take a PCR test and enhanced contact tracing will be used for those who test positive.