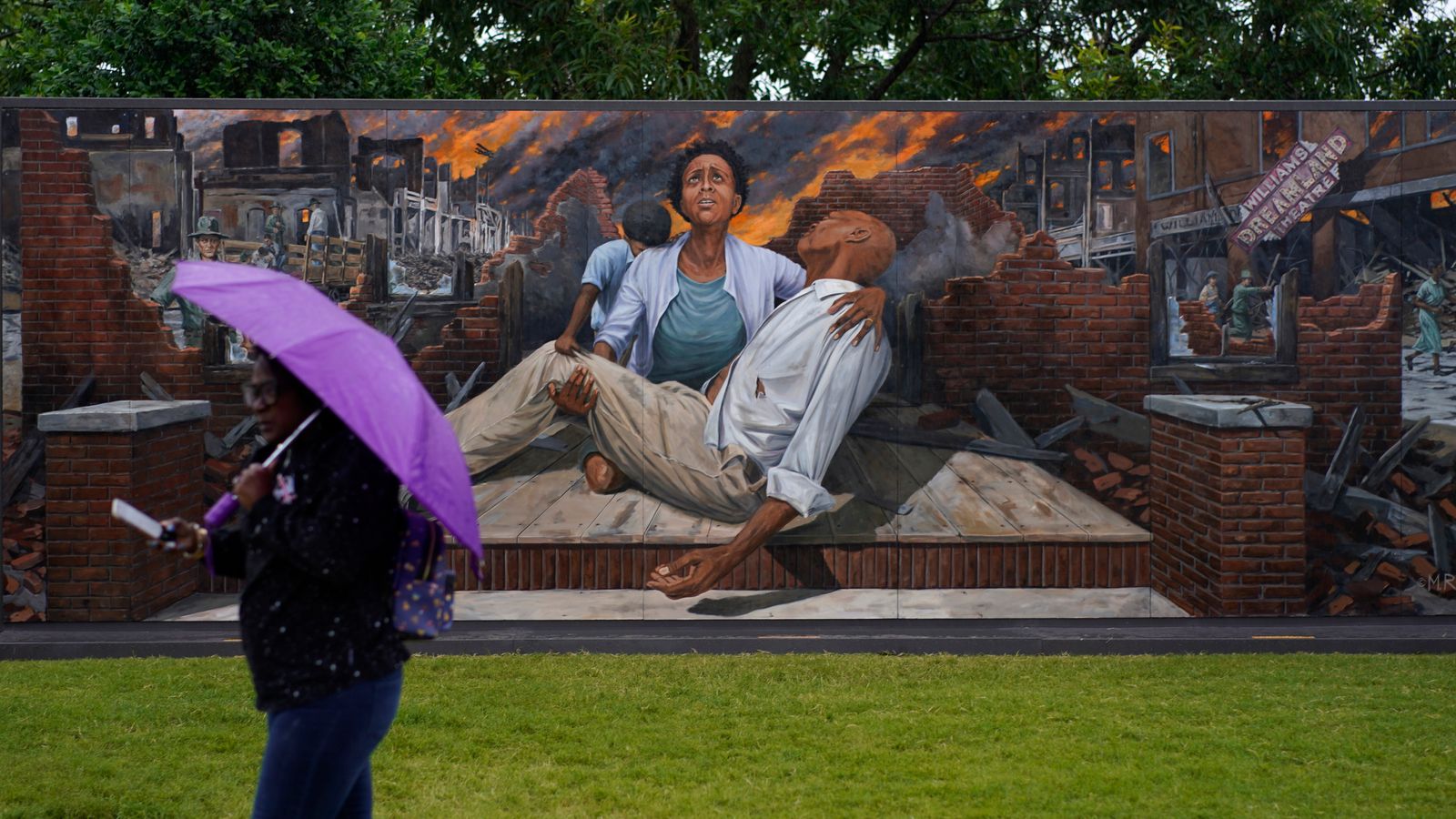 Hundreds of people gathered outside a church in Tulsa, Oklahoma, to commemorate the 100th anniversary of the deadliest racist massacre in the US – and President Joe Biden is set to honour the victims later today.

The Tulsa race massacre took place between 31 May and 1 June 1921, when white residents in Tulsa’s Greenwood district attacked black residents and burned down businesses, with estimates of death tolls ranging from dozens to 300.

Earlier, civil rights leaders joined local faith leaders offering prayers outside Vernon African Methodist Episcopal Church, which was under construction at the time but largely destroyed during the massacre.

Reverend William Barber, a civil rights activist, said he was “humbled even to stand on this holy ground”.

“You can kill the people, but you cannot kill the voice of the blood,” he said.

Although the church was nearly destroyed, worshippers continued to meet in the basement and rebuilt it several years later – becoming a symbol of resilience in Tulsa’s black community.

Among those who spoke at the outdoor ceremony were Democratic representatives Barbara Lee, Lisa Blunt Rochester and Chris Coons.

As the ceremony came to an end, participants put their hands on the prayer wall along the side of the sanctuary while soloist Santita Jackson sang Lift Every Voice and Sing.

Monday’s activities were supposed to culminate in a headline event at ONEOK Fields, with a performance from John Legend and a keynote speech from voting rights activist Stacey Abrams.

However, the event was cancelled last week after an agreement could not be reached over payments for three survivors of the attack.

In a statement tweeted on Sunday, Legend did not specifically address the cancellation of the event but said: “The road to restorative justice is crooked and rough – and there is space for reasonable people to disagree about the best way to heal the collective trauma of white supremacy.

“But one thing that is not up for debate – one fact we must hold with conviction – is that the path to reconciliation runs through truth and accountability.”

Meanwhile, other events included a joint service for the massacre at the First Baptist Church of North Tulsa led by Reverend John Faison Sr on Sunday.

On Monday, the Centennial Commission hosted a candlelight vigil to honour the victims of the massacre, and President Biden is scheduled to visit Tulsa on Tuesday.

He will be the first president to be part of the remembrances of what happened in what used to be known as “Black Wall Street”.

Sending love to the people of Tulsa as they commemorate the Massacre of 100 years ago. While we won’t be together tomorrow, I look forward to visiting with you in the near future, and, most importantly, to a true reckoning and reparations for the survivors and their descendants. pic.twitter.com/v1qA1hyVdU

Last October, at least 10 bodies were found in an unmarked mass grave during a search for victims of the massacre.

The discovery of 10 coffins was described as significant by the city’s mayor, GT Bynum, who budgeted $100,000 (£71,000) to find victims after previous searches had failed.

Sugababes on change in the industry, regaining control and going back on tour
London Underground workers vote to strike again in coming months
Double blow for Boris Johnson as Tories plunge to two by-election defeats
The new tactics being used by ‘crash for cash’ scammers and the 10 new areas they are targeting
Voters fed up of hearing how I ‘stuffed up’ PM says as he plays down by-election defeats